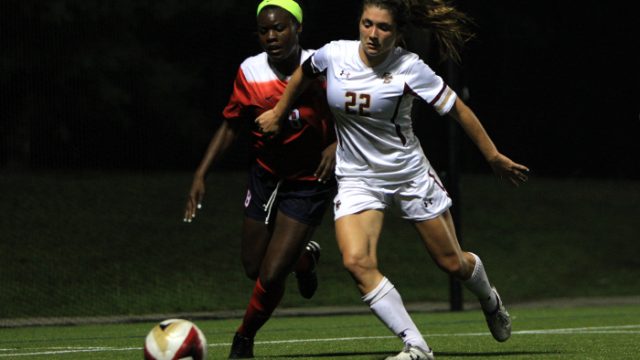 With a tit, a tat, and a rip to the upper-left corner of the net, McKenzie Meehan found herself back in familiar territory—atop the Boston College women’s soccer leaderboard in goals.

At the 16-minute mark against Stony Brook, Meehan collected a pass at the top of the 18-yard box on the left side and deftly curled toward the middle. She side-stepped one defender as she burst toward the middle, then juked another with a clever tap off the outside of her right foot, and sent the ball sailing homeward.

The strike was the second of two first-half goals for Meehan, the star redshirt senior striker who led the Eagles (2-0-1) to a 3-0 win over Stony Brook (0-2-1) on Thursday in Newton.

With her first goal, a volley from the the penalty kick marker off a cross from freshman Jenna Bike eight minutes earlier, Meehan tied—and will soon likely surpass—the all-time school record for game-winning goals with 16.

BC freshman Olivia Vaughn scored her first career goal, a looping strike in the 73rd minute from 23 yards out. Defender Allyson Swaby sailed the ball from BC’s defensive zone after a brief Stony Brook foray, and it found Vaughn at midfield among a pair of Seawolves defenders.

Vaughn gathered the pass, flicked the ball in front of her and jetted past Stony Brook’s Jada Stewart down the right-center swath of the field. With her next move, she booted the ball from distance, easily clearing the head of Stony Brook keeper Shannon Robinson, who was more than 10 yards off the goal line.

“She was playing up the line all game,” Vaughn said, “and we even said at the beginning that she was very high off. We had been talking about being able to chip over her early in the game, in the first 10 minutes. When I looked up, I saw that and just played it over.”

Vaughn was one of eight freshmen to get some playing time in the Eagles’ third regular season match. Forward Jenna Bike, defender Samantha Hiatt, and keeper Erin Seppi each received starting nods, infusing the opening lineup with youth across all sectors of the field. Bike also found her way onto the scoring sheet. She served the cross for Meehan’s first score after chasing down a ball to the right corner flag and eluding a defender to create a passing window.

The BC back line has surrendered just three goals in as many games, mainly a product of the poise and muscle of Hiatt. Countless times, the freshman centerback handled the ball like a senior midfielder, snapping whip smart passes up the field and playing it back when necessary.

“She plays like an upperclassman,” Foley said. “Her composure on the ball, her decision-making and passing out of the back, her range, her ability to find central players in tight spaces—she never gets too riled up. Her positioning is excellent. She captains the U-18 national team, and that translates into usually looking like an upperclassman in college.”

BC outshot the Seawolves 25-7 and challenged Robinson on net 12 times. Meehan contributed six shots, including four on goal, both game highs.

Seppi recorded four saves for the Eagles and came off her line midway through the second half to clear away a dangerous through-ball being hunted down by Stony Brook’s Raven Edwards.

BC has scored eight goals in its first three games, an effect of a new, aggressive scheme. Last season, the Eagles toyed with a 4-4-1 formation, but this year Foley has scratched that and pushed her midfield up higher. A superior defense, in essence, is the foundation of a potent offense.

“In the back, we’re better and more athletic—we have a better backline,” she said. “Our two holding midfielders are great ball winners, Kayla and Jade [Ruiters]. … It allows us to push more numbers forward. When you feel confident that you’re not going to be susceptible in the back, you add some extra numbers forward, and that’s really the situation that has allowed us to go forward a little bit more.”