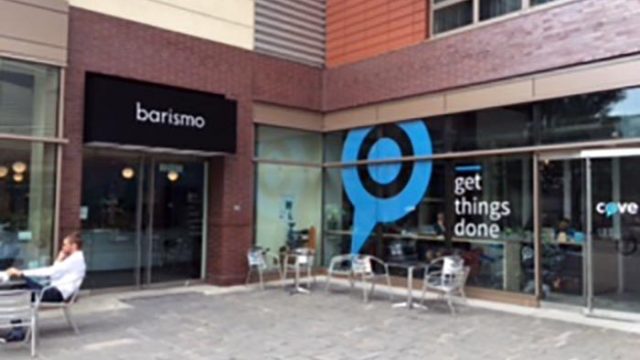 Although home might sound like the ideal office, working from home is often lonely, demotivating, and distracting. Actual offices, on the other hand, can be demoralizing and expensive, while good workspaces, like coffee shops, are nearly impossible to find consistently in cities. Cove, a Washington, D.C., start-up with deep roots in the Boston area, has partnered with a new local coffee shop, Barismo, to offer Boston residents a “happy medium” between a traditional office and their homes—the ideal workspace. For an all-access pass of $135 each month, users get private cubicles and meeting spaces.

Although Cove is based in D.C., where the company has established a network of convenient locations for D.C. residents over its three years of operation, both of its co-founders, Jeremy Scott and Adam Segal, regard Boston as the real hometown of their brainchild. As Segal puts it, the opening of the Kendall Square location on Aug. 22 was “a true homecoming.” Cove plans to create a network of locations in and around Boston similar to that which it established in D.C. over the past three years.

Cove’s local roots go back to 2012, when Segal and Scott mapped out their business plan in Voltage, a coffee shop once located in the same place as their new location in Kendall Square. At the time, Segal was pursuing his master’s at Harvard University and Scott was pursuing a Ph.D. at MIT.

“This location is very personal for us,” Segal said. “Who knew a few years later, we would open a workspace in the very spot where we were writing the plan for the company.”

Spurred by sentiment, Segal and Scott decided this location was an opportune venue for a novel variation upon their idea. Partnering with Barismo, a Greater Boston coffee retailer and roaster founded in 2008, Cove created a workspace-coffeehouse power combination. Together, these two Boston-born start-ups sought to create a space where everyone, from small businesses to individual workers, can maximize their productivity. Barismo has two existing locations in Arlington and Cambridge.

While the concept of co-working space in itself is no original innovation, Cove has reengineered it.

“[The space] enables both employees and employers to choose when, where and how they work,” Scott said.

To achieve this, each location is equipped with private call boxes, on-demand meeting spaces, free Wi-Fi, color printing and scanning, and free coffee, tea, and soda. Cove workspaces are designed specifically to support the modern lifestyle, according to its website.

And the Cove app serves as an essential tool for Cove members, providing them with an entire arsenal of amenities at their fingertips. It allows them to view nearby workspaces, reserve conference rooms, interact with members on-site, and scan in and out of a workspace so that others can view availabilities at each site.

Each workspace is engineered to empower the modern worker with the flexibility that life demands, enabling an individual or a team to work when, where, and how they want, as though they were working from home, while providing the motivation and resources a shared working environment, such as a traditional office, fosters—along with the perks of a high-quality coffee shop.

Barismo has expanded rapidly in both popularity and scale due primarily to a series of bold innovations to the coffee buying, shipping, and brewing processes they have designed and implemented to ensure transparency in sourcing their ingredients, attention to detail, and exceptional coffees. Segal called it an “innovator in the coffee space.”

“We feel like the one thing we haven’t been able to do with Barismo is to provide the working/studying resource that many cafes give away,” said Jamie Van Schyndel, Barismo’s founder. “Finding a way to improve on that is what our partnership with Cove is trying to accomplish.”