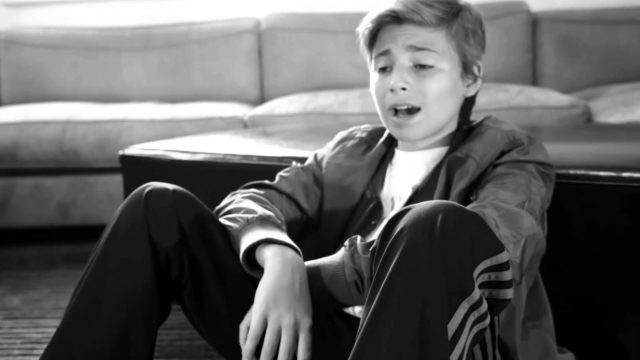 When performing on stage, Lis exudes an unmatched level of confidence and swagger. Offstage, Lis is unpretentious and congenial.

Success so early in Lis’ career can be attributed to his love of music from a young age. He began playing the piano and drums at 5 years old. At 7, he discovered that his passion was singing.

Like many young and hungry artists, Lis created a YouTube channel to showcase his talent. His cover of Leona Lewis’ “Better in Time” currently has 2.6 million views, and his cover of Passenger’s “Let Her Go” has 1.7 million views.

Jason Flom, founder and head of Lava Records, saw videos from Lis’ Youtube channel and was so impressed that he invited Lis to showcase at his office.

“When Liam showcased at our office I knew immediately that we had to sign him,” Flom said to Musicconnection.com. “His singing, dancing, musicianship, songwriting, style and swagger were so strong, especially for someone so young. It was clear that he was—and is—destined to be a star!”

Lis was soon signed to Lava Records and began to work in recording studios with producers.

Attending a school on the Upper East Side of Manhattan, Lis found it somewhat challenging to balance his academic life with his music career. Lis credits Christopher Dunham, the head of the school’s middle school, with keeping him grounded and focused on his work while being understanding of his other ambitions.

As Lis released original songs and more covers, his fan base began to grow.

“I wanted to show people my music and perform for them,” Lis said.

Lis embarked on the Camplify tour at just 10 years old, performing at summer camps across the nation. Lis was also an opening act for Zendaya and Fifth Harmony. His fan base and his passion for music continued to grow as he toured.

Lis recalls one of his most memorable moments so far, which was performing his song “If You Fall” for a girl stricken with meningitis. Lis performed for her at a fundraiser organized by his team.

In April, he released his music video for “Number 1 Girl” featuring Fetty Wap. When he found out through a mutual friend that Fetty Wap was interested in working with him, he was amazed.

“I was shocked,” Lis said. “He’s awesome and really humble.”

He also got the chance to work with Nile Rodgers, guitarist for the 70s band Chic. Rodgers plays the guitar in Lis’ single “4 the Luv.”

Lis’ musical inspirations include Bruno Mars, Maroon 5, and Taylor Swift, and he would love to work with Adam Levine in the future.

For Lis, the rest of the 2016 summer included performing at different shows and releasing new music via Youtube and SoundCloud, preparing for his upcoming EP release.

liam lis
Blue Collar, Ivy Green: Boston College’s Defense Is Back and Ready to Dominate
Soundtrack to Our Lives