Home » Making the Most Out of the New Year
Opinions, Column

Making the Most Out of the New Year

When I stepped foot in the Boston Public Library for the first time three years ago, I entered with the same awe-induced, wide-eyed wonder with which I saw many things that first year. Everything was fresh and waiting to be discovered—I was new to college, new to New England—and I bestowed this wondrous, half-starved gaze on almost everything I encountered in my strange surroundings. From the first autumn leaf, to the first hockey game, to first friendships, to my first Dunkin Donut, that year was prophetic—romantic, even. From the window of my beloved single on the third floor of Fitzpatrick, watching a football being tossed around on the snowy lawn before dinner, I’d think how I never wanted it to end. But of course, it would insult the definition of “new” if things could be new forever. Like all good things, every year must end, and a new one must begin.

With millions of freshmen and seniors across the country going into their first and last years of college, I’ve had change and memory on my mind. Freshmen, underneath their bright-yellow Superfan shirts and newly-learned football chants, are probably wondering what the next four years will bring for them and whether they made the right choice. Seniors, underneath their confident smiles and Marathon Monday scars, may be wondering similar things. In the span of three years, many things have changed, as things tend to, both for the worse and for the better. College is no longer as strange and thrilling as it was to me the day I first walked down Linden Lane with the rest of my class. Walking into the Boston Public Library now, I am still impressed by its beauty, but I am not breathtaken as I was that first time. I know it inside out, and my once wide-eyed gaze is now accustomed to the grand marble staircase and the frescoes on the walls. I’m used to the high, vaulted ceilings and the majesty that once stopped my heart. I sometimes wish I could experience everything in life with that same delicious excitement that I had experienced the library with for the first time, or my freshman year of college. Imagine if we could preserve good memories and feelings like water in a pool and dive back into them whenever times got tough. Maybe we would immerse ourselves in them forever. But how many hundreds of times can we replay the same happy song before joy turns to nostalgia, and nostalgia to sorrow, and sorrow to utter numbness? And more importantly, how can we live this year of college in the best way possible, with little nostalgia for the past and even less fear of the future?

I don’t have all the answers, but I have a few suggestions. One of them occurred to me the other day while I was waiting for the B Line. You know how people are always sticking their heads out on platforms to see if the next train is coming? The other day at Copley Square station I caught myself doing it too. Why do we stick our heads out to look for the train when we know it’s coming anyway? In life too, we’re always sticking our heads out to see what’s coming, but to what end? If it’s coming, it’s coming anyway, and if it’s not, then it’s just as useless to stick your head out. In college we can get so caught up in planning for our future that we forget to enjoy this brief period of our life in which we can be both virtually independent and mostly carefree. We have the luxury of time to learn about and get involved in things we’re actually interested in, so why not take that random French new wave film class along with the resume-padding internship? Not everything we do has to be “useful.” (Not that a French new wave film class is necessarily un-useful.) I guess in the end it all depends on your definition of useful. Something that brings you joy, and nothing more, could be seen as “useful” just for that reason. The best and most durable things, after all, are usually ends in themselves, not means to certain ends.

Another seemingly obvious but actually strange thing I noticed the other day: a man painted in all silver on a bike with his scarf blowing in the wind, as though frozen mid-ride. He was a real man, of course, a regular street busker. But it made me quite sad. He had neither an audience nor any tips in his silver hat served by his outstretched arm, while the breakdancing crew next to him had a huge, cheering crowd. Well, you might say, what’s so great about a silver-painted man standing still? Everyone loves a good breakdance. And I agree, after a while it’s pretty damn boring to watch someone just not moving at all. But at the same time, it’s kind of amazing. In a world that’s so bustling, where everything exists in a flurry of motion, it’s hard not to notice such stillness, and even to admire it. You seldom see someone sitting alone on the grass (iPhone not in hand), just looking around. And if you do, you’d probably notice (and maybe think it’s weird). In our day-to-day lives we’re so obsessed with constant activity that we hardly ever take a moment to look around and appreciate our surroundings, even our existence.

I guess what I’m saying, clichéd as it sounds, is that we should practice living in the present. We should stop sticking our heads out and be the silver man for a moment—still, watching the world move around us. Memories are important, but we can’t live in them or try to dress the present in the past’s shrunken clothes. The future is important also, but we cannot get so lost in imagining and planning that we forget to experience where we are. After all, there is only so much pining and planning that can be done. Whether you’re a freshman organizing your entire college career, or a senior trying to figure out what to do with the next chapter of your life, plan but don’t over-plan. We can’t plan everything about our college experience, just as we can’t plan everything in life. I planned this column to be about the political climate on American college campuses, and look how that turned out.

library college
A GOP in Jeopardy
Finding Creativity in the Kitchen 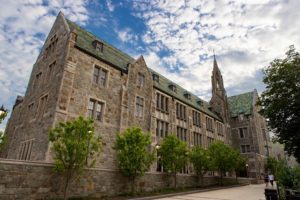