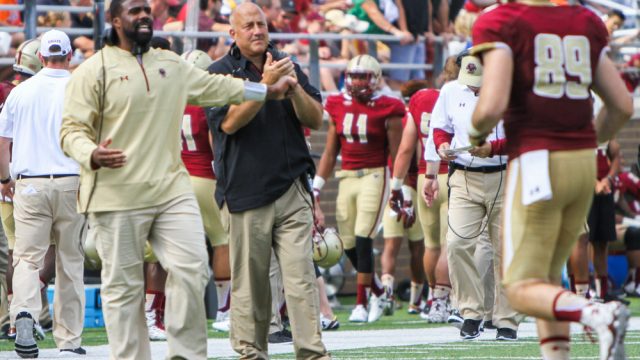 Previewing Boston College Football, 2016: What to Expect From Georgia Tech

Since its announcement during the summer of 2015, the 2016 Aer Lingus College Football Classic between Boston College and Georgia Tech has been a marketing spectacle. At the time, both teams were on the upswing, with Tech coming off of an 11-3 season, capped by a commanding victory against Mississippi State in the Orange Bowl, and BC finishing up a 7-6 season in which Steve Addazio appeared to have his Eagles far ahead of their rebuilding schedule. But just one year later, the overseas college football showcase now features a pair of teams looking to put abominable 3-9 seasons in the rearview mirror.

For Paul Johnson’s Yellow Jackets, last season’s failure boiled down to a drop in production from their vaunted triple option offense, a scheme run by no other Power Five conference team. Built to mitigate Georgia Tech’s lower level of talent relative to top ACC peers, the scheme bludgeons teams with a repetitive ground game and opportunistic deep passes. Converting third downs, racking up time of possession and averaging nearly 300 rushing yards per game, the Yellow Jackets wear out nearly all of their opponents.

Last season’s squad bucked Johnson’s long track record of success. Tech averaged just 256.8 yards per game on the ground, easily the fewest in its coach’s tenure. Of greater concern, it converted just 34.9 percent of its third-down opportunities, 108th nationally and a terrible figure for a team that relies on a methodical offensive approach. The Yellow Jackets also struggled with an inability to secure the ball, losing 14 fumbles last season, in addition to posting a minus seven turnover margin, tied for 105th in the country. The inability to possess the ball for extended stretches crippled the triple-option offense and allowed opposing defenses to remain well-rested.

The offense’s 2015 struggles may be attributed to a rash of inexperience on the offensive line and in the backfield. The 2014 squad featured a senior-laden backfield that enabled Tech to have three players with over 850 yards and eight touchdowns on the ground. By comparison, five of its top six running backs in 2015 were either freshmen or players seeing the first significant playing time of their collegiate careers. That squad produced only one runner with more than 500 yards, and no player ran for more than six touchdowns.

This season, Johnson feels good about the way his team has prepared in training camp, with the rushing attack poised to make significant improvements. Last season’s leading rushers Marcus Mitchell and Clinton Lynch return with another year of experience under their belts, joined by Georgia transfer J.J. Green and freshman Dedrick Mills. Green, who sat out 2015 to satisfy NCAA transfer rules, has gotten positive reviews thus far in training camp. The experience and depth developing in the backfield, along with the return of injured center Freddie Burden to the offensive line, should help the Yellow Jackets ground game return to respectability after a disappointing 2015 campaign.

Another key for a Georgia Tech offensive resurgence is the play of senior quarterback Justin Thomas. A shifty, explosive runner, Thomas keyed Tech’s option offense in 2014 and led the team with over 1,000 yards on the ground. He also threw for 18 touchdowns and just six interceptions, posting good efficiency in a passing game built mainly around taking opportunistic deep shots when a defense focuses too intently on the option attack.

Last season, after the departure of the experienced 2014 backfield, Thomas struggled mightily. Perhaps impacted by the burden of being the leader of the offense, he tried to do too much. He rushed for fewer than 500 yards and failed to have a major impact on the ground, especially in conference play. Thomas also threw 13 touchdowns and eight interceptions, completing just 41.8 percent of his passes, with the downfield passing game much less open amid the rushing struggles.

With the expected improvements of the running backs this season, Johnson hopes that Thomas will play more like the electrifying triggerman from 2014 than the exhausted veteran from 2015.

Against an aggressive BC front seven, Georgia Tech will need a vintage performance from its option offense to slow down the Eagles’ defenders. Expect a heavy dose of the traditional triple option, in which one running back, a B-back like Mitchell, lines up like a fullback a few yards behind the quarterback, and two running backs, A-backs such as Lynch and Green, line up with one behind each offensive tackle. At the snap, Thomas will read the defensive line. His first move will be to see if the dive up the middle to the B-back, is open. If the line crashes down to take this away, he will scamper to the perimeter, where he will read an oncoming perimeter defender. Here, Thomas will either keep the ball or pitch it to an A-back dashing toward the sideline.

For the Eagles, maintaining their gap assignments at the snap is crucial against an offense like this one. Overaggressive pursuit of the ball can lead to a long touchdown run down the sideline. New defensive coordinator Jim Reid will have his hands full making sure his players properly string the option out, forcing them to run laterally instead of making progress down the field. Short gains up the middle will be preferable to allowing outside runs.

In addition, though not a huge portion of its attack, Georgia Tech will look to throw deep every few plays, hoping to catch a secondary with its eyes in the backfield. Especially given the tenacity of their front seven, this is something the Eagles should definitely put themselves in position to avoid.

On the defensive side of the ball, Georgia Tech struggles mightily with getting pressure on the quarterback, totaling just 14 sacks in 2015 and the fewest tackles for loss in FBS football. The problem is made worse by Tech’s loss of four starters in the secondary. With a weak pass rush, the now inexperienced secondary will have precious little help from its defensive brethren. Finally, the defense as a whole struggles to force turnovers, leaving Georgia Tech vulnerable to longer drives. Fortunately for the Yellow Jackets, they will line up against a BC offense without a definitive starting quarterback, untested receivers, a young offensive line, and a penchant for short drives Saturday in Dublin.

If Tech’s option against the ferocious Eagles defense is the heavyweight prize fight, the depleted Tech secondary against this BC offense is the undercard that takes place with only family, friends, and the cleaning crew in attendance. The Eagles will need to decisively win this matchup in order to remove the sour taste still left from last season’s end, attacking through the air and receiving breakout performances from their young wideouts. Otherwise, they’ll return home with scarcely more than the Boston College Ireland merchandise hawked by vendors across campus.