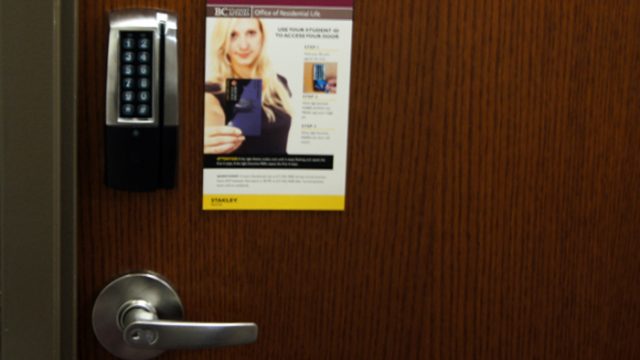 This year, Boston College has increased security measures by adding new locks and proximity card readers within residence halls around campus. During move-in, however, the new system posed problems for several groups of students, primarily freshmen, who faced difficulty accessing their bedrooms and bathrooms.

The system was tested in Cheverus Hall in January 2016, and implemented in all residence halls on Newton, Upper and College Road this fall. The new proximity card readers and PIN door locks were also added to each apartment door in the Reservoir Apartments and Thomas More Apartments.

When freshmen arrived for move-in, however, they were initially unable to enter their individual bedrooms using their ID card and PIN code, according to Duke Saunders, MCAS ’20. After having issues gaining access, Stanley Security, the security company working in partnership with BC, issued temporary ID cards to help students enter their rooms.

“The security changes should provide each student with a stronger sense of security.”

Via email, Resident Director Matthew Razek directed members of the first and second floor of CLXF to contact facilities staff or resident assistants if they had been locked out. In addition, bathroom doors had to be propped to allow student access, the email said.

Throughout BC Welcome Week, the IT staff worked to change some lock mechanisms on individual bedroom doors in the freshmen residence halls. Cards were reset and all of the issues were worked out by Aug. 26, according to an email sent by the Office of Residential Life to students in affected residence halls.

“We appreciate everyone’s patience with our team as we continue to improve and enhance the safety and security of everyone in our BC Community,” Deputy Chief of Boston College Police Department Thomas Atkinson said in an email.

The implementation process was a joint effort conducted by the BCPD, Residential Life, BC Information Technology Services (ITS), BC Facilities, BC Student Services, and Stanley Security Solutions.

The additional security measures are a part of a larger three- to five-year project, which will include providing similar upgrades to the remainder of residence halls, academic, and administrative buildings on campus.

With the new security system comes new responsibility for students. Students were told to have their ID cards with them at all times, even to access the bathroom. Eventually, if a student gets locked out of his or her room once, he or she will receive a warning. After the second time, he or she will have a meeting with the Resident Director of the building, and after the third time, the student will be fined $50.

All other residence halls now have the proximity card reader to enter the buildings. To enter individual rooms, however, students still only need their group PIN code, and do not have to tap their ID card.

“The security changes should provide each student with a stronger sense of security,” Atkinson said.