Home » No. 11 Men’s Soccer Struggles to Take Down Hofstra 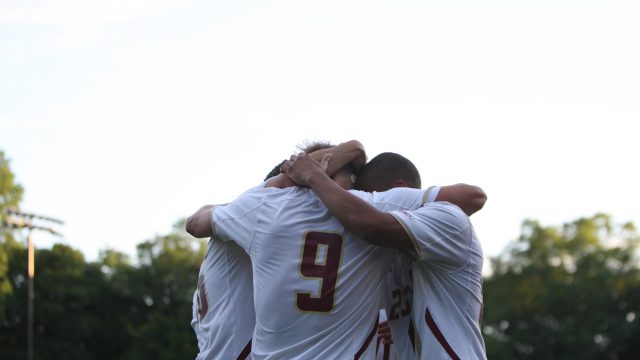 No. 11 Men’s Soccer Struggles to Take Down Hofstra

In its last game, Hofstra accumulated four yellow cards and one red card in a 6-0 loss to UNC Charlotte. On Friday night, the Pride came out with similar ferocity as it looked to hand No. 11 Boston College men’s soccer its first loss of the season.

“It was a street fight,” BC head coach Ed Kelly said.

Hofstra isn’t a dirty team, but the physical play coupled with inconsistent officiating made for a scrappy game with 25 total fouls. The Pride dominated the physical battles on the field and kept the ball in its attacking end. The Eagles (3-0-0), however, came out with a 2-0 win thanks to strikes from their two big European forwards, sophomore Simon Enstrom and senior transfer Maximilian Schulze-Geisthovel.

In the 16th minute, Trevor Davock dribbled in toward goal and gave it to Enstrom for a wall pass into Zeiko Lewis, who took a hard low shot across goal. Pride (1-2-0) goalkeeper Leo Arkhanhelskyi made a fine kick save, but the ball fell back to Enstrom, who did enough to put it past a defender and the sprawling keeper for the opening goal.

Hofstra had clear control of the game throughout, leading in several offensive metrics. With the ball consistently in front of the BC goal, the Pride outshot the Eagles 21 to 12 and had seven corners to BC’s two. Despite the disparity in total shots, however, Hofstra only managed six shots on goal while BC had five. When it counted most, the Pride were far less clinical than the Eagles.

Hofstra found itself with the ball right in front of goal on numerous other occasions and failed to find the back of the net. The most notable example came right before halftime, when forward Daniel Massey whiffed completely on a loose ball from six yards out. Hofstra also wasted two free kicks from just outside the box, one right before half and one late in the second, as both kicks were sailed over the bar by midfielder Joseph Holland.

While the Pride lacked the clutch gene, it still threatened a number of times. On each of these six shots on a goal, sophomore goalkeeper Cedric Saladin was there to make the save and preserve the clean sheet.

“The best guy on the field was our keeper,” Kelly said.

Despite the constant pressure, Saladin commanded the box and looked especially comfortable with the ball at his feet. Saladin’s best highlight came in the 68th minute, when he dove to his left to save a low, hard shot in full stretch.

In front of Saladin, junior transfer Tommy Gudmundsson put in his first 90-minute performance of the season at center back, and has aptly replaced the injured Len Zeugner in terms of both size and play. In the middle of the field, Lewis was up to his usual tricks, and freshman Lasse Lehmann looked sharp in the middle. Up top, Schulze-Geisthovel performed very well as a substitute for the starter Enstrom.

The big German sealed the victory for the Eagles in the 89th minute with an easy tap-in off of a breakaway. Lewis slipped the ball behind the defense to freshman Callum Johnson, who streaked toward goal, before crossing it to an open Schulze-Geisthovel. That was Johnson’s second assist in as many games.

Three games into the season, there are still a fair number of organization and chemistry problems to be sorted out. While a win’s a win, a team with this much preseason hype should handle a physical team like Hofstra much better.