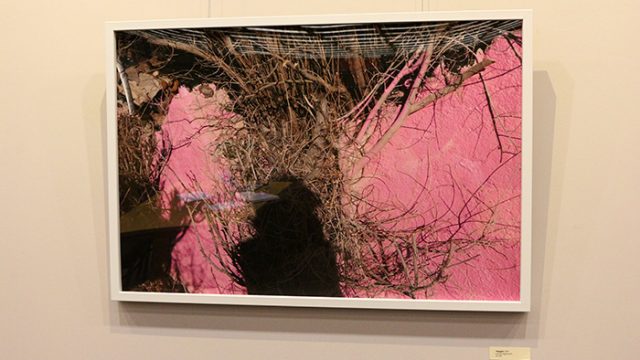 O’Neill Exhibit Uncovers the Shades of ‘Pink’ in Us All

A picture may be worth a thousand words, but what about a single color? Emotionally, blues are melancholy, reds denote anger and frustration, while yellows exude notions of happiness, and greens the bitterness of envy. Where, then, does pink lie on the spectrum of feeling, and what does it say about the people and places that employ its spry and alluring shade? The Seeing Pink exhibit in the O’Neill Library third-floor gallery, curated by Lisa Kessler of the fine arts department, explores the myriad uses and implications of the multiform color, showing how people everywhere use it for various ends through several eye-catching prints and photographs.

Shrubs depicts the side wall of a building, painted a loud shade of pink, flanked by dark green shrubs running along its length. One implied notion of pink, in this instance, appears to be deviance, as the brash color is sure to be seen as unsightly to some in the public sphere. Its unnatural relation to its immediate surroundings suggests discord, in direct opposition to the natural color palette of the organic world. Pink distinguishes itself as abrasive, unabashed, and counter cultural.

Using a lighter shade, with a different use of the color, Doll is a simple photo of a doll laid on its side. The pink dress on the doll furthers the ideas of innocence inherent in the child’s toy. The soft color is a complementary element, used to bestow a pure, uncorrupt aesthetic unto the doll.

Alternatively, pink can be used to ostracize and castigate. Tent City of the Maricopa County Jail, a prison in Arizona, houses inmates in a complex of tents outside the proper facilities. In the sweltering desert summer heat, the institution forces its prisoners to sleep in pink sheets and wear pink clothes, including underwear. Tents depicts an inmate holding his pink-sleeved arms, with pink bedding  in the background. As pink is generally considered a feminine color, the enforced use of color among men seems to emasculate and shame the criminals. This form of punishment speaks to the psychological aspects and influences of the visual on individual and collective psyches.

Code Pink depicts a pink-heeled shoe hovering above the ground as if it is about to be put down. As is evidenced by the title, the photo references the organization Code Pink: Women for Peace, which campaigns for grassroots movements of women to end globalist military ventures in the United States and around the world. Pink, in this instance, is used as a symbol of the female and female empowerment. Its use implies female unification under a cause. As the photo insinuates that women ought to “put their foot down” regarding war, the onus and responsibility falls on the active participation of women and their experiences in the world. Code Pink, a play off the medical emergency code, is implying the emergency of war and acts as a calling card for women to action.

In a similar call for unification used to spearhead a movement, the Pink Angel Posse uses the color to draw attention to its fight against and for the awareness of breast cancer. The motorcycle club seems to marry the brutish nature of a hardened group of motorcycle enthusiasts with the dainty, concerned color. Pink is used as a means of unifying two unlikely worlds. Bearing angel wings on back of a pink MC jacket, adorned with all the appropriate stitches and badges, the ladies are enough to give pause to viewers as they roar down the road.

Other works, like Hair, which depicts a pink face with closed eyes, and Turf, displaying a section of turf sprayed pink, are more difficult to analyze, and yet speak to the varied uses of the off-shade of red. Pink, as a color, can be used to express many things, some of which may contradict each other. The end result is a color that demands careful examination and tact in its application.

It is in its varied uses that pink makes itself such an attractive color for political, as well as personal, statements. Pink demands a place on our color palette and cannot be ignored. In more ways than one, pink unifies us all.

After all, we’re all pink on the inside.

seeing pink
Homogenneous Songs Leave Travis Scott Caged in ‘Birds in the Trap’
LTE: A Response to “A GOP in Jeopardy”