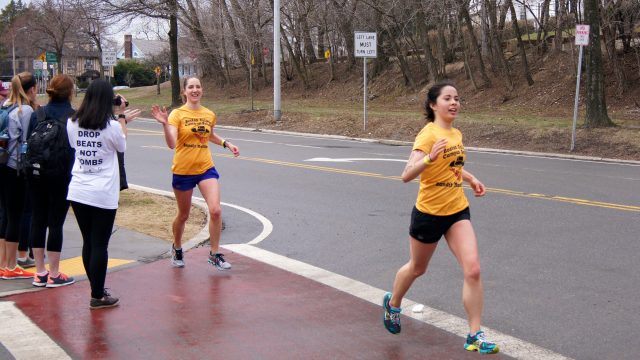 It’s time to drop the basketball and lace up your running shoes.

On Saturday, Sept. 17, the coaches and athletes of Boston College men’s basketball are partnering with the American Cancer Society to host the sixth annual Coaches vs. Cancer 5K Classic, a run to raise money in support of cancer research.

The race will begin at 10 a.m. outside of Conte Forum. The course will loop around campus and the Chestnut Hill Reservoir.

Coaches vs. Cancer started in the early 1990s when a group of college basketball coaches decided it wanted to give back, according to Greg McKeever, community manager of the New England Division of the American Cancer Society.

“Since then it has really taken off,” he said. “The American Cancer Society threw its support behind it, but it has really been driven by the coaches and volunteers at each of our schools and teams that gets involved. They are the ones making it happen.”

McKeever’s job consists of working with youth in high school and college to organize Coaches vs. Cancer events. He helps the schools’ outreach and fundraising efforts.

Coaches vs. Cancer hopes to eliminate cancer as a major health problem not only in the United States, but across the globe, McKeever said.

The American Cancer Society offers several services to people fighting cancer, including a 24-hour hotline that people can call to receive assistance with medical insurance or to find support groups in their area.

The American Cancer Society also has a program that drives patients to and from chemotherapy and other treatments. In addition, the organization has facilities called Hope Lodges that provide a place for patients to stay while receiving treatment free of charge.

“It’s things like that which ease the burden of folks that are impacted by this disease,” McKeever said. “We wouldn’t be able to do that without events like the Coaches vs. Cancer 5K.”

The funds raised will be distributed to where the organization sees most fit.

“The greatest need is here locally,” McKeever said. “A large portion of our research budget is used locally at some of the hospitals in Boston and throughout New England.”

Although several universities across the country host the Coaches vs. Cancer 5K, BC is the longest-running and most successful participant in the country, McKeever said.

This year, there will be an additional run, a half-mile loop, for children 12 and under. When the main race is finished, there will be a carnival set up for the participants which will feature games, food, and activities. BC men’s basketball players will also be signing autographs for fans after the race.

Each person who registers for the race will receive a free Coaches vs. Cancer t-shirt. The winners of the race in each age group will receive medals and other prizes.

Participants can register for the race on the American Cancer Society website.

“It has been a great experience to work with the coaches [at BC]. They are very supportive and enthusiastic about this cause,” McKeever said. “We are hoping to get as many people as we can out in the community to support the event this year.”