A library that just houses books is not a library at all. Those who traverse and stock the shelves make the library the place it is. As we combat a new semester, and the library hours extend into the terminal hours of the night, let us remember who keeps the light on for us. The library staff are our silent champions. But as is commonplace among the ranks of champions, the library staff possess skills beyond realms of stocking shelves, cataloguing, maintenance, and research—they have a creative side as rich as that of anyone strolling through the front doors.

The Celebrating Creativity of the Boston College Libraries’ Staff exhibit, on display this month in the first-floor gallery of O’Neill, brandishes the imaginative side of these unsung heroes through a collection of their paintings, photography, computer graphics, writing, and handiwork.

Two acrylic paintings by Barbara Adams Hebard (Conservatory Lab, Burns Library) were especially alluring. Summer Morning (2011) consists of wide purple strokes atop a yellow background embellished with green swaths. These features together evince a sightly floral pattern. The other piece, Inferno (2011), uses red to a powerful effect. The blood-red background appears to be welling up, as lava flows, through the addition of gray and black splotches that litter the canvas.

Photographs by Kevin Tringale (Exhibits, Burns Library) are astutely reminiscent of M.C. Escher. Their various forms capture sharp geometric points and patterns within Indian architecture. Panna Menna ka Kund, India (2015), depicts a repetitive zig-zag staircase stacked horizontally, giving a repeating diamond shape viewed head-on. Another of Tringale’s pieces, Jantar Mantar, New Delhi, India (2015), is a peek through a red plastered window. Inside, beams supporting the structure can be seen, casting a shadow in between their lengths. The shadow created, coupled with the colors of the supports, gives off a regular semi-circular black-and-white pattern. This dynamic, together with the color of the window, results in an enticing urge to look inside.

Collages by Terra Kallemeyn (Electronic Resources & Acquisitions, O’Neill Library) act as magnificent and slightly comical ventures into a surrealist wonderland. Prairie Soup (2015) depicts a Western canyon with children, proportionally enormous, peering through to an even proportionally larger bowl in the foreground. A large ladle dips into the pristine waters of the bowl, picking up one of the tiny swimmers wading inside. Another piece, Space Ping Pong (2015), depicts a celestial struggle. A mountain expanse, with stars overhead, is overcast by shadows as the arm of a space giant uses his Ping-Pong paddle to bat the earth into the nearby moon. In the foreground, an audience of finely-dressed bodies observe the cosmic ongoings.

The digital work of Chris HP (Web Design & Communications, O’Neill Library) cleanly catches the eye. A beige-sided house with white windows is broken up by a woman lazily leaning out into the world. Above her, and only her, blue leaves fall as blue flowers sprout below. Aptly titled Lady in the Window (2015), it provokes sentiments of boredom between the avenues of new and old seasons, or even life and death. In another spin of the digital brush, the Devourer of Worlds, the God of Oblivion himself, Galactus makes an appearance in Galactus (2014). As Galactus steadily put his hands about the earth, one can be sure that there is no hope, as the world we know becomes his sustenance.

In a more abstract fashion, Laurie Maywille (Access Services, Bapst Library) has two unfolded white paper bags on display, one vertical, one horizontal. Initially, one may not recognize the bags, a possible play on seeing objects in a different light or form. Alternatively, one may see the precise straight lines of the once-folded bag as a painful reminder of the bags true form—its true potential—now destroyed and undermined by a cruel, unforgiving world. Projected onto a human being, a simple paper bag sings a dour song. Untitled (2016) seems more of a suggestion.

The exhibit summarily showcases the many talents of the library staff. Whether their art depicts Galactus, starmen playing ping pong in the sky, the sun, or a paper bag, the people of BC’s libraries are more than the title on their desk. 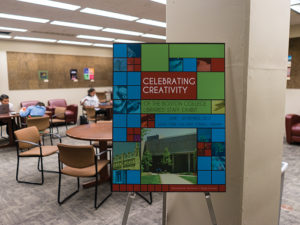