Home » Set Pieces, Wing Play Give BC Advantage Over Duke 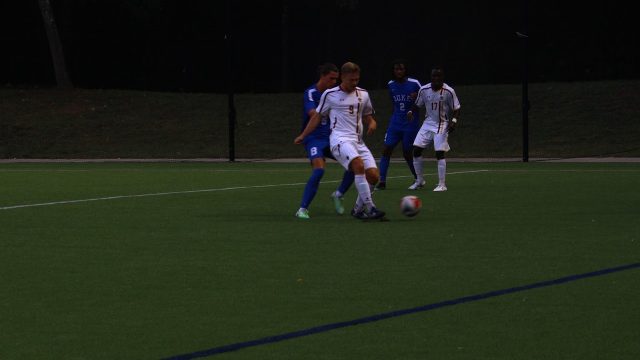 Set Pieces, Wing Play Give BC Advantage Over Duke

Boston College men’s soccer has taken 42 corner kicks over the course of its first five games of play, nearly double its opponents’ tally (23). The No. 25 Eagles sustained this form of attack Saturday evening in their ACC opener against Duke.

BC lined up for 12 corner kicks, five more than the Blue Devils, in its 1-0 home victory. Almost every Eagles corner left the foot of Callum Johnson. Only a freshman, Johnson spent his high school years with the New York Red Bulls Academy and started 20 games for the No. 4 Under-18 Red Bulls team. Johnson leads the team with three assists (all came in three consecutive games prior to Saturday’s win) on the season, and is head coach Ed Kelly’s man of choice at all four corners.

“Coach put me on that role for the team: set pieces,” Johnson said. “Early in the season we converted from some of them, so I just try to put it in a dangerous area whenever I can.”

Despite coming off the bench and only playing nine minutes in the first half, Johnson, an “assist-first” player, took three corner kicks before the first horn. The entire team had only taken two before he entered the match.

“He’s got great instincts for passing,” Kelly said. “He gets down there, and fights like a dog, saves it. Guys are trying to pull him off, and he puts it back across for [Zeiko Lewis]. Good kid, good player.”

In addition to creating corner kicks, BC (4-1-0, 1-0-0 Atlantic Coast) spreads the field. With the finesse and energy of Johnson on one side of the field, and the agility of Lewis on the other, the Eagles are poised to find an opening in the middle.

Up to this point of the season, most teams have rivaled BC with physicality. Both Duke (2-1-1, 0-1-0) and BC fouled each other 13 times. Whether or not the fouls are called, the aggression remains a constant, especially with ACC play underway. For instance, Duke frequently double- or triple-teamed the big-bodied, 6-foot-2 forward Maximilian Schulze-Geisthovel, often forcing him to the ground. Competing with teams that consistently enter with a “rough and tough” mentality perhaps led Kelly to value the perimeter of the field.

All season, BC has played well out wide. But, following the Sept. 4 loss to Villanova, Kelly made a change. Not a stylistic one, but rather a new look on the field.

Kelly moved Lewis to the left wing and placed Simon Enstrom in the center. Enstrom was thrown into what Kelly calls “dog’s work” in the Eagles’ bout against Duke. Standing at 6-foot-1, seven inches taller than Lewis, Enstrom was able to fortify a stronger position in the middle of the field. Meanwhile, the adjustment allowed Lewis to maximize his speed on runs down the field. In fact, it was Lewis, on the defensive side of the field, who located Enstrom, paving the way for BC’s game-winning goal in the 50th minute.

Another mixup included giving Schulze-Geisthovel his first start of the season. The Dresteinfurt product leads the team in scoring with four goals, and while he did not score against Duke, he had many opportunities. A matter of inches could have exchanged a missed header and rebound for a goal or two.

Naturally, the start of ACC play spawned excitement, as overtime appeared probable after the first half. The Blue Devils extended their stretch of striking play, succeeding in getting an upset win over No. 8 UCLA. At times, Duke’s passing was effortless, smooth and quick, enabling the team to control the ball in BC’s backline. The goalkeepers Cedric Saladin (Eagles) and Robert Moewes (Blue Devils) made incredible saves throughout the game, but Enstrom’s zinger was enough to send Duke back to Durham with its first loss of the season.