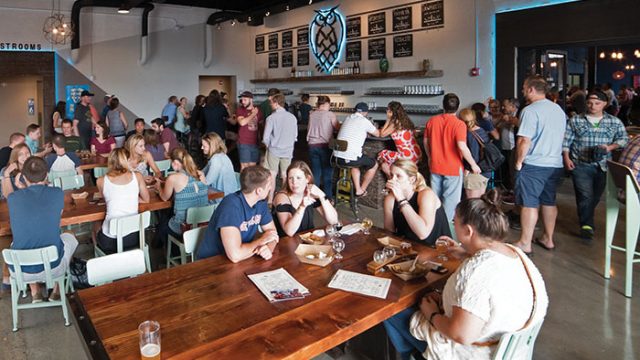 Michael Oxton, Mike O’Mara, and Rob Burns, co-founders of Night Shift Brewing, have opened up an annex adjacent to their existing locale to address a problem most business owners only dream of: long lines, and a waiting list of retailers eager to carry their product.

The new annex will feature enough room for 80 seated people in the space, while having the capacity to expand to 150 for special events. Night Shift, which is in Cambridge, also incorporated an additional bar into this space adjacent to its existing taproom, and it will help accommodate the growing crowds at the establishment.

It will also maintain the 24 draft lines the main bar has, while keeping the same feel the original taproom has with its rustic-industrial bar stools. The new area will also have a lounge area with weathered leather couches and armchairs, all surrounding a gas-powered fireplace.

It’s a testament to the company’s philosophy that the brewery would rather forgo an aura of exclusivity by having long lines outside its previous taproom for a more inclusive atmosphere catered toward improving the customer experience.

“The NSB philosophy is built around creating and sharing a world class culture that stems from our passions,” Oxton said in an email. “This influences every aspect of our company from our staffing, to our taproom experience, to our processes on the production floor—we’re committed to sharing this world-class culture through everything we do.”

The popular brewery has seen its success skyrocket since its beginning in 2012, when the brewery was but a hobby for the co-founders to partake in.

“All three of us worked various desk jobs [or] day shifts, before starting the brewery—one in finance, one in sales/customer service, and one in software engineering,” he said. “We all lived together in Somerville after college, where we began home brewing.”

Night Shift entered the beer industry at a time when Boston was just beginning to tap into the potential of craft brews. At bars all around the city, individuals can find more than their fare share of local brews on tap, with many opening their doors within the last 5 years. This new trend has seen the demand for local or microbrews increase to the extent that taprooms, just like the one Night Shift owns, have been sprouting in and around the city.

“The reception from the local community has been overwhelming,” Oxton said. “Our taproom is filled all week long with everyone from devoted locals to tourists from all over the country.”

For Night Shift, making a product people in the area will appreciate has been at the top of its to-do list ever since the beginning. Oxton said that people in this area really seem to care about where their product comes from and how it’s made.

This culture has been a boon to Night Shift—many of its customers are those who are seeking a specific experience when they go to taprooms, like the one it provides. By being engaged with the community and actively participating in open events in their taproom, they have managed to create a large, loyal following.

“Night Shift puts an enormous focus on producing fresh, memorable, world class beers, and creating a shared beer culture around them,” Oxton said. “We never cut corners and our quality assurance and quality control process has become a huge part of our focus.”

In keeping with the trends nationwide, the brewery has not focused entirely on a single style of craft, instead trying out different blends and rolling them out into the taproom on a regular basis to test the market for its products.

This part of its business model, the taproom experience, has been one of the most important aspects of the company, with the original taproom accounting for more than 50 percent of its revenue, according to Oxton. This is what prompted them to expand its service area and serve more eager customers.

Not everything has been smooth sailing since the company’s inception, however, with the founders having to put in long hours and experiment with different tastes. But it was this willingness to evolve and adapt to changing tastes that have made Night Shift one of the best-known breweries in the Northeast. It even received an invitation to compete in the 2016 World Cup of Beer, in which a panel of experts that determine the best beer around the world judges 175 entries.

“[In order to succeed] humility is probably one of the biggest keys … you’re never done improving, someone’s always doing it better, and you’re going to have way more bad ideas than good ones,” Oxton said. “You just have to be OK with that, and you have to act on the good ideas, not the bad ones.”