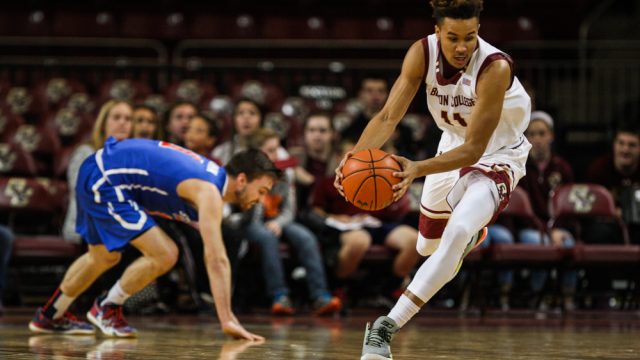 Men’s basketball now knows the full lineup it will face on its quest to pick up its first ACC win since 2015.

Boston College released its upcoming ACC schedule for men’s basketball on Monday afternoon, which includes 18 games, beginning with a home matchup against Syracuse on New Year’s Day. These, along with 12 non-conference games, make up the team’s full 30-game schedule for the 2016-17 season.

The Eagles will begin with a home exhibition against Stonehill on Nov. 3 before the regular-season opener against Nicholls State on Friday, Nov. 11. The team will play three-straight home games against Maryland Eastern Shore, Stony Brook, and Towson the following week.

BC will take part in the Barclays Center Classic this fall, which will include two of the team’s three games in New York City. Kansas State will face BC on the day after Thanksgiving before taking on the winner of either Maryland or Richmond the next day. Maryland could be BC’s first matchup against a ranked opponent.

Another key game for BC’s non-conference schedule is on Dec. 7, when Harvard comes to Conte Forum looking to avenge a 69-56 loss in Chestnut Hill last year. The Providence Friars will also return to Conte on Dec. 23, their first time back since BC’s 69-60 upset win on Dec. 5, 2014.

The Eagles will make a second trip to New York City on Dec. 12 to face Auburn at Madison Square Garden for the Under Armour Reunion, where South Carolina will face Seton Hall in the second game of a doubleheader. BC’s final and other away non-conference game will be at Fairfield in Connecticut, the shortest distance men’s basketball has travelled as part of its non-conference schedule since the 2008-09 season.

After kicking off ACC play with a game against Syracuse, the Eagles will continue with eight more away and nine home conference games. Six of those games are currently slated to be broadcast on ESPNU, while eight more are for NESN/RSN. Only three home games will take place during academic breaks this year: the game against Providence, the conference opener against Syracuse, and a Jan. 11 matchup against North Carolina State. The ACC Tournament is scheduled to take place the week of March 7 at the Barclays Center in Brooklyn.