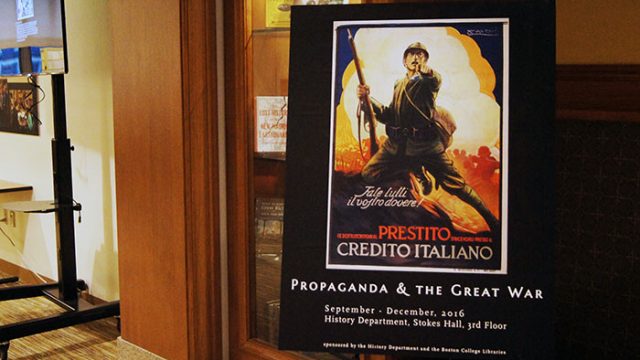 In today’s society, military recruitment and propaganda are very different from that of American and foreign enlistment and engagement with its citizens during war-time 100 years ago. Today, the military and its several branches argue that service requires those that are of the composure to and are willing to go above and beyond the call of duty, while many citizens decry our military engagement in foreign territories. But what did the government propagation of and citizens’ reactions to the call to war look like 100 years ago, when people thought the world stood on the brink of destruction? The new exhibit, Propaganda and the Great War, gives students an idea of the responsibilities and values that governments across the globe felt their citizens owed to their nations in response to the outbreak of an undeniably epic war.

The Propaganda and the Great War exhibit is on display from September until December of this year on the third floor of the Stokes South building. This display was put together by a 13-person undergraduate history seminar in the Spring of 2016, which was formed in coalition with the Burns Library. These students then analyzed an abundance of propaganda both before and after World War I.

The students had access to the many historical pieces through online libraries featuring a variety of posters. The Boston Athenaeum, one of the oldest independent libraries in the country, lent some of the images to the project.

The display was presented on a rotational screen as well as displayed on the walls throughout the floor. The content of the posters ranged from emotional, pleading messages meant to tug at heartstrings, to angry, vengeful messages. Most of the messages were remarkably similar calls for help.

It was interesting to see how each country enticed its citizens to get involved in the war effort. The posters showed what kind of support each country needed and revealed some of the more emotional responses to the war in each specific country. For example, the propaganda piece Keep These Boots Off The USA by John Warner Norton warns of a German invasion on United States soil. The poster illustrates a bloody pair of boots with the warning below in black ink, “Keep these off the U.S.A. Buy more Liberty Bonds.” There is also an illustration of a young girl, no older than seven, with a bright red bow and blonde hair. The message below her reads, “My Daddy bought me a Government Bond of the Third Liberty Loan. Did yours?”

Some of the propagandist messages seemed to display a turning away from the normal culture in order to help the war effort. One of the propaganda messages read, “Don’t Take Alcoholic Drinks on Mondays.” Another read, “Good Work and Good Wages for Good Women.”

In addition to American propaganda messages, the exhibit featured posters from other countries including France, Great Britain, and Germany, among others. It was frightening, especially in respect to the German posters, to see some of the messages being passed on to countries’ citizenry. Germany’s poster, La Guerre Est L’Industrie Nationale de La Prusse or War is the National Industry of Prussia, emphasizes the Germans’ desire to conquer its neighbors and enemies.

“This poster communicates Germany’s unprovoked, nationalist aggression to the French people,” said John Daniell, one of the students from the seminar who analyzed the pieces and MCAS ’17. “Both the text and the imagery of the octopus’s tentacles extending through neighboring countries and into Europe, suggests a German desire to conquer Europe and the world.”

Also included in the exhibit were pieces of correspondence between service members and the people back home. Some messages seemed to try to maintain a sense of normality, focusing on issues back home rather than what was going on overseas. In another, a soldier discusses his living quarters and even draws illustrations of what his living situation is like. Another set of letters described a soldier’s family looking for their son after he had gone missing. The feelings of this tragedy are palpable in the letters. All of these letters and descriptions of the reality of the war are helpful to see when trying to draw an accurate history of the time. The propaganda pieces only inform viewers of what the government wanted and the messages it needed to promote. These letters really gave a look into how the soldiers and families dealt with the harsh realities of this war.

This informative exhibit shines a light on people’s emotions during the time, as well as the messages the government was looking to promote about the war. Countries employed a variety of messages that tugged at different heartstrings to look at the problem that was the Great War.

propaganda and the great war
The “Future Looks Good” for OneRepublic, The Fray is “Singing Low” for Rainy Days This Week in Singles
Will the New ‘Jurassic World’ Trilogy, Uh, Find a Way?