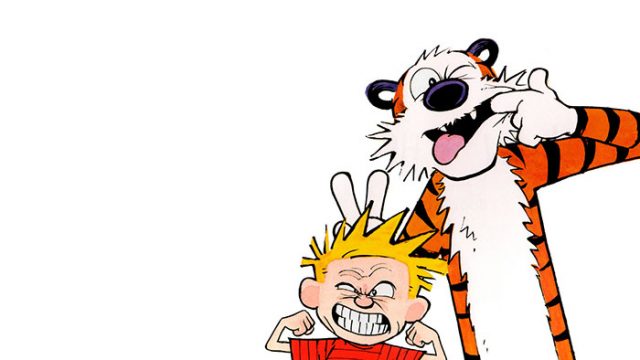 “Everybody I know needs what I’m selling,” explains the precocious 6-year-old, his arms spread wide in an expression of complete exasperation. Written in shaky lettering on the upturned box the boy sits behind are the words, “A Swift Kick in the Butt” and a quantity,  “$1.00.” In front of him, a mild-mannered tiger stands comfortably on his hind legs.

The comic is just one scene, the monochromatic sketch now several decades old. Yet despite its simplicity and old age, this comic far surpasses the kind found printed in papers and featured in online publications today—or, at least that’s what I think.

Until Dec. 1995, buried somewhere within the Sunday comics section in scores of newspapers published nationwide, this little boy carried his signature blunt humor throughout the entirety of his comic strip’s 10-year tenure. In these brief strips—mere snippets of this fabricated boy’s childhood—our humorous hero kept himself busy by hatching complex, get-rich-quick schemes; disagreeing with his parents through the use of flowery vocabulary well beyond his years; and even making grand, philosophical assumptions about the human condition after constructing snowmen in his backyard.

Meet Calvin, an incredibly intelligent, fictional kindergartener with a knack for talking back and a tendency to wreak havoc alongside Hobbes, the boy’s better half who just happens to be an imaginary friend and anthropomorphic plush tiger. Endearing and honest, it’s a comic strip about a smart-aleck-kind-of kid who is so intellectually advanced—too smart for his own good, really—yet simultaneously up to his eyeballs in his own naivete. Hobbes keeps his human in check as Calvin’s constant voice of reason and snark that interjects when the kid’s runaway imagination needs to be taken down a peg.

Years after Charles Shutz produced Peanuts and Jim Davis started droning on about a corpulent, lasagna-loving cat, Bill Watterson wanted more fulfillment from his adult life, thanks to an advertising job he hated. From this stark realization coupled with a talent for sketching, Calvin and Hobbes was born. Apparently, all it takes to experience a stroke of comedic genius is a humdrum desk job and a midlife crises of sorts (good to know).

Though I was only technically alive a mere one month before the misadventures of these mischievous characters ceased coloring the inner pages of the Sunday Globe, I developed an appreciation for the boy and his tiger toy when my family inherited a few hardcover books from my older cousins when I was about 11-years-old. The Best of Calvin and Hobbes was emblazoned across the front in a gold-colored font, the now-iconic image of Hobbes flying out of a wagon while Calvin soars in the air wielding an umbrella stamped just below the title.

I read the book cover-to-cover, sat down again months later, and then decided to go a third time through after that. While kids my age were getting a little too into the Harry Potter Series, perhaps I had been nursing a Calvin-and-Hobbesian obsession by constantly borrowing one of Watterson’s works from the local library.

In a way, I kind of related to Calvin—not in that fist-shaking, short fuse kind of way he has about him, though. Sure, I was no pint-sized philosopher who boasted an imaginary Bengal tiger for a best friend, but I did identify with the boy’s routine bouts of wordiness and sarcastic kind of humor. It was pretty cool seeing Calvin—a kindergartener whose every word oozed a weird, six-going-on-sixty vibe—cope with the big, wide world of homework and helicopter parents, bullies and backyard baseball at the same time that I was starting to leave my younger formative years behind for early adulthood. For me, the comic strip was both funny and familiar, and I liked how it offered a peek into the lives of two guys (well, technically one kid and a tiger) I could get behind.

The Calvin and Hobbes series is a time-honored tale of boyhood and brotherhood, a bridge between the plausible events of one’s early years and the boundless potential of the imaginary. At times, Calvin can come off more like a hardened war veteran than the average, clueless kindergarten kid who can finally count his age on two hands.

Intertwining dry, mature humor into the complicated life of an overzealous elementary school kid and his beloved stuffed animal, the quality and humor in Watterson’s unique comic style has not been—and perhaps may never be—topped by today’s inferior strips.