College Democrats of Boston College invited members to join a conference call with Tim Kaine, the Democratic vice presidential nominee, on Friday afternoon to discuss the role of the Catholic community within the Democratic agenda.

Patrick Coyne, MCAS ’18, who currently serves as the finance director for College Democrats of Massachusetts, sent out an invitation to CDBC members Friday afternoon before the call. If members chose to join the call, they responded to an online form and would be linked to the phone line. Anyone across the country was able to link onto the call. where people were able to ask Kaine questions.

Coyne has worked at the Democratic National Committee for the past two summers. He was asked to bring the call to BC by John McCarthy, who works to coordinate faith efforts for Hillary for America, Hillary Clinton’s national campaign for president.

Coyne and McCarthy thought it was important to bring the call to BC because of the Catholic heritage of the University. They wanted to show students that Democratic ideals and the Catholic faith can overlap on a number of issues.

On the call, Kaine discussed the importance of Jesuit thought within politics. He focused on relating the Gospel teachings in the Catholic Church to Democratic ideals. Kaine talked about the Jesuit mission of being a man or woman for others and encouraged Americans to live by this motto in their everyday lives.

“Kaine just wanted people to understand being a good Catholic is helping each other, doing what is right, and making sure everyone in the community is helped, which is what the Democratic Party is about.”

—Patrick Coyne, the finance director for College Democrats of Massachusetts and MCAS ’18

“We just want to make sure with Catholics, and especially young Catholics who are going to Jesuit schools, that they understand that their education is here to help others,” Coyne said.

Kaine attended Rockhurst High School, an all-boys Jesuit high school in Kansas City. He went on to graduate from the University of Missouri in three years and continued his education at Harvard Law School.

After his first year at Harvard, however, Kaine took a break from his studies to travel on a missionary trip to Honduras. For nine months, Kaine helped Jesuit missionaries run a Catholic school. He increased enrollment by encouraging locals to get an education.

Kaine has held talks about his connection to Catholicism throughout his campaign with Clinton and discussed it at length during his speech at the Democratic National Convention in July. In the future, he hopes to hold another conference call that directly focuses on issues pertinent to millennials, Coyne said.

Leading up to the election in November, CDBC is holding several events to “get out the vote.” On Oct. 1, CDBC members will travel on a canvassing trip to New Hampshire alongside Congressman Joe Kennedy to knock on doors for the Clinton campaign.

“Kaine just wanted people to understand being a good Catholic is helping each other, doing what is right, and making sure everyone in the community is helped, which is what the Democratic Party is about,” Coyne said. 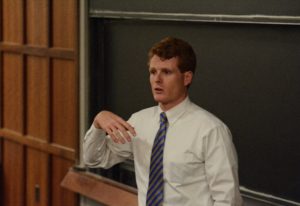