Home » The Political Climate at BC 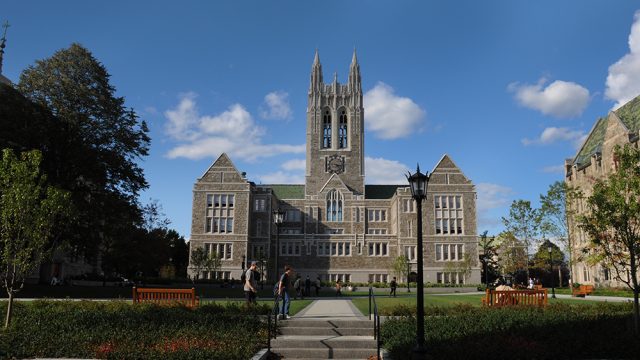 The Political Climate at BC

It doesn’t take long to notice that Boston College students are overall much more politically “mild”—and less politically active—than a lot of their counterparts on college campuses across the country, such as Yale and the University of Missouri. We’ve had a few jolts of activism in recent years and there is an often-forgotten history of protests decades ago, but it’s not often that we see lively political debate, boisterous rallies for social justice, protests against climate change, demonstrations, sit-ins, or picket signs of any kind on campus. This isn’t necessarily a bad thing. On the contrary, it may in some respects be positive. I’d like to get to the bottom of this apolitical business and determine whether it’s just an obvious product of a lack of political extremism among the student body (mostly good), or a lack of political interest among the student body (not so good).

It’s not that we don’t have political student organizations on campus—we do, though not many—it’s that these organizations are not very visible, which reflects a want of political activism and interest among students. Sure, we have all the classic elements of political groups on campus, but they lack the verve and presence that these groups exert on many other campuses across the country. Perhaps the most memorable examples in recent years have been the activist efforts of Eradicate Boston College Racism and Climate Justice at BC. Some may remember Eradicate supporters’ marching across campus last year singing parodied Christmas carols to raise awareness of institutional racism, or the time members of CJBC held an overnight vigil outside University President Rev. William P. Leahy’s office to get BC to divest from fossil fuels. But even some of these events were ill-attended, short-lived, and met with hesitation by the administration, including sanctions placed on protesters involved in Eradicate and CJBC.

Now, I’m not saying we should go around campus topless to protest gender inequality (“Free the Nipple,” UC San Diego) or, even less, organize a “shit-in” as a campaign for gender-neutral bathrooms (Cal Poly). But still, a part of me wishes BC students would get a little more involved in the political sphere.

I’d posit that this lack of frequent, visible events is due to a combination of both less political extremism and less political interest. A lot of students are just content to go about their busy daily lives and feel no need or inclination to take a special interest in politics. A lot of students are interested in politics, but their views are so balanced that they don’t translate into special activism or involvement. The oft-heard self-description of “socially liberal, fiscally conservative” may to some extent explain this political mildness, which sometimes isn’t even mildness, but just a general apathy. Then there’s the Jesuit, Catholic aspect of the college that acts as a sort of tempering influence, generally in a positive way. These tendencies and influences, coupled with an administration that isn’t particularly encouraging of political activism, could very well explain this mildness on campus.

Still, college is a formative time and one of the best to be politically active. Whether we like it or not, politics is an important part of life, and I would encourage students to get more informed, if not involved, with international and domestic politics—especially with the election we have coming up in November. Just a few days ago at Berkeley (surprise, surprise) a pro-Trump exhibit set up on campus was destroyed by students, who later formed an impressive mob around it and started chanting some not-so-nice things at the Trump supporters.

Regardless of my opinions on any given candidate or issue, when I hear about things like that it makes me feel grateful that I go to BC. We may not be the most politically engaged, but at least that mildness leaves room for differing political opinions, and an openness of mind that doesn’t threaten important freedoms. Political engagement on college campuses is important, but there is an ideal middle ground between apathy and extremism that BC students should strive to reach.