Home » A Weekend Away From BC Reminds Me Why I Love College Football
Football, Featured Column, Column

For the first time in what feels like forever, I observed from afar.

This weekend was the only time I had all semester to step away from my duties of covering Boston College Athletics. Of football’s 12 games, I’m assigned to 10, including road trips to Florida State, Wake Forest, and, as you’ve already seen, Georgia Tech in Dublin. When the Eagles travel to North Carolina State, I’ll be at Kelley Rink to see men’s hockey take on Providence.

This weekend, it wasn’t my responsibility. Our associate sports editor, Riley Overend, had the privilege of joining football on its trip to Lane Stadium in Blacksburg, Va. I hear the experience was great. Even if the game wasn’t.

Don’t get me wrong, now. I love covering BC, through the wins and the losses. I won’t say which I enjoy more. Yet it was nice to step away from the pressure-filled grind of meeting deadlines for game stories. I didn’t have to worry about writing eloquent prose with perfect copy in the shortest amount of time, live tweeting during press conferences, or analyzing plays from several decks up in giant football stadiums. This weekend gave me the opportunity to sit back on my deck that overlooks Comm. Ave., eat a couple of hot dogs with a fellow editor on The Heights, and listen to Bruce and Billy.

That being said … I spent much of the weekend watching sports. Yes, I saw BC’s embarrassing debacle against Virginia Tech. But I also got a chance to watch games just for the enjoyment. I haven’t gotten to do that very often on Fridays and Saturdays in the fall the last two years.

The best part comes from watching games in which I had no vested interest. Sure, I saw my beloved New York Mets pound the last-place Minnesota Twins as they continue their magical September run. And I saw my New York Giants continue their solid start to the season with a 16-13 victory over the New Orleans Saints.

But all of the best moments—for good and for bad reasons—came from college football. In a matter of 48 hours, college football made me sweat, scream, cry, cheer, hold my breath, and let it all out. No other sport can do that with teams you wouldn’t give a damn about on any other day.

My whirlwind of emotion began Thursday. I was supposed to be studying for my interpersonal communication test, but hey, the most exciting team in the nation was on primetime. No, it wasn’t any of the Power Fives—rather, it was No. 6 Houston and Greg Ward, Jr. After muddling along for three quarters, the Cougars were down 16-12 in Cincinnati with less than a quarter to go.

Little more than 12 minutes and 24 points later, a tight matchup turned into a blowout—40-16 in favor of the Cougars.

In that game, I saw what made me first fall for college football: the plight of the underdog. If you aren’t from a Power Five conference, you have everything to lose and everything to gain each time you step on the gridiron. A loss doesn’t send the fans into an uproar the way it would in Baton Rouge or Ann Arbor. But there’s no sneaking into the playoffs and hoping to get hot. One loss and the nation will find every excuse to delegitimize your team.

Given my New York upbringing, I hadn’t had a stake in any one team. I bounced around. The Florida Gators piqued my interest most (and by the way, if someone has an update on Luke Del Rio, that’d be great).

But I fell first for Boise State, the plucky upstarts from the Mountain West Conference who, in 2007, upset Oklahoma in the Fiesta Bowl on a thrilling series of trick plays. Houston reminds me of that team.

It’s just a shame that the Cougars will run into Lamar Jackson this November. I’ve never seen one man embarrass the No. 2 Florida State Seminoles the way Jackson did on Saturday. The 62-20 demolition showed how fleeting a time even the most legendary programs can have on top of the world. I await in eager anticipation how high the Louisville Cardinals can fly up the AP Top 25.

I don’t always root for upsets—I smile and appreciate dominance when the blue bloods stay on top. The thing is, in college football, the blue bloods always make it exciting. No. 1 Alabama needed a late comeback against Chad Kelly and No. 19 Ole Miss. No. 3 Ohio State lit up Bob Stoops and Oklahoma, thanks to a young receiver named Noah Brown. His catch over the back of Sooner cornerback Michiah Quick will be hard to top by the end of the year. Michigan and Wisconsin fans had to sweat out their wins against lesser opponents. Stanford and Clemson fans … not exactly.

Oh, but when there are upsets, they’re better than any other sport. And three types of upsets happened on Saturday.

There’s the disrespected team on the road, or basically any time Mark Dantonio steps onto the field. For some reason, No. 12 Michigan State was an eight-point underdog at No. 18 Notre Dame. Entering the game, the Spartans were 10-0-1 in their last 11 against the spread, with five upsets. It wasn’t easy—Michigan State almost gave up the game after running roughshod over the Fighting Irish—but it made me glad that I don’t gamble on sports. (Yet, anyway.) Plus, Notre Dame losing is pretty great, too.

There’s the College Football Ref Special™ (all rights reserved). As a middle-school baseball umpire, I get this one. You see kids out there playing a game, you just want to get involved, too. Don’t do it. Don’t make it about yourself, they tell you. But every week, we find a new way in which the refs make it about themselves. We saw it last week with Oklahoma State and Central Michigan. It popped up again in the Cal-Texas game. I’m sure we’ll be hearing about this one again when the Big XII crowns a controversial winner.

And finally, there’s my favorite: FCS team downs FBS team. Unlike other matchups, which generally involve a bad top-tier team against a great FCS team, this was a game of heavyweights: No. 13 Iowa vs. FCS five-time defending champion North Dakota State. The Bison taught us a valuable lesson: stop freakin’ scheduling them. It was only the fourth upset by an FCS team to a ranked team. And the best part was NDSU’s lack of celebration—almost as if Chris Klieman and Co. knew that this game would be like all the others. Poor, poor Iowa.

Not every moment was fun and exciting. Two fan bases in particular—Baylor and Penn State—found ways to be more tone deaf than their administrations. Baylor, where sexual assault and police-orchestrated cover ups were rampant throughout the Art Briles era, had its fans freak out during Rice’s halftime show. The Marching Owl Band arranged itself in a IX, noting the Bears’ many Title IX violations. There’s nothing to laugh about in poking fun at those incidents, but Baylor fans appeared more incensed about an insensitive band formation than, ya know, years of Title IX violations. And Penn State … well, just read Mike Wise’s piece in The Undefeated. That sums up the blind vision by which Happy Valley looks at the legacy of Joe Paterno. Good on Temple fans for taking the proper stand.

The best moment, though, was uniquely college football. Before its game against Nebraska, Oregon laid a bed of flowers on the 27-yard line. This was in honor of Sam Foltz, Nebraska’s punter, who tragically passed in a car accident this offseason.

And this was from just three days worth of games!

So when BC has a weekend like this, when you tear your hair out and want to give up on the Eagles forever—or at least ask when hockey season starts (Thursday!)—my advice is to just change the channel. There are plenty of them. And across the nation, in a span of hours, you’ll experience every emotion possible. That’s what makes college football the best.

The only bad part about loving it? You’ll be back next week, probably watching the Eagles. Don’t worry, I’m sure one of those powerful moments will happen to BC. Eventually. 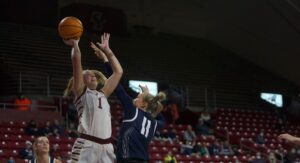