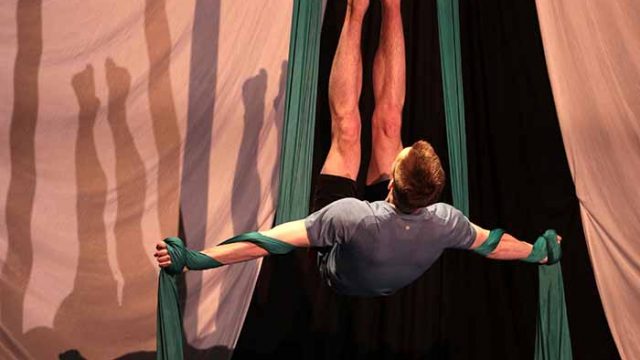 Connor Hagan, CSOM ’17, an aerialist who trains in Cambridge, isn’t afraid to shoot beavers. Not after the beaver infestation a few years ago, when the globetrotting acrobat had to take to the trees with a gun.

“There were hundreds of them just clogging up the river and creating this insane overflow,” he said. “So one day, in the middle of the summer, I just perched up in a tree with one of our rifles. I’m not proud. It was definitely the most southern thing I’ve ever done. … But those damn beavers.”

Hagan is from from the South, having spent a majority of his life on an alpaca farm on the outskirts of Atlanta, Ga. But his external persona doesn’t exactly scream gun-toting Southerner plagued often by beaver infestations. You’ll also never hear anything about how much he misses warm weather, good football, Bojangles’, or any other traditional aspect of Georgia culture. The reason for this? He simply doesn’t.

This aversion to home might also explain, to some extent, Hagan’s penchant for travel. Since high school, he has studied abroad in Paris, Shanghai, and, most recently, Hong Kong. Additionally, he’s fluent in English, Mandarin, French, and currently undertaking another linguistic endeavor by enrolling in a Korean language class.

The culmination of these skills contributed to him receiving a Fulbright scholarship to work in a small rural town outside Xi’an, Hong Kong. But instead of jumping at the opportunity, he turned it down.

“If I were to have accepted the scholarship, I would’ve had to take off spring semester, since the fellowship ran from January to August,” Hagan said. “Plus, I was abroad all of fall semester, so I figured it would be nice to come back to Boston. The timing just wasn’t right.”

Hagan did more than study in Hong Kong. While there, he trained and taught a class in aerial silks.

Hagan grew up training as an aerialist at local acrobatic studios. He was inspired by a Cirque Du Soleil performance his family had taken him to, and figured he would give the sport a shot. Turns out, he had a talent for it.

Over a decade and countless falls later, Hagan trains for roughly 15 hours a week at the Esh Aerial Arts company in Cambridge, which takes nearly an hour to commute to via the T. In addition, while abroad, he taught as an aerialist coach for expats.

“When I was in Hong Kong, I ended up joining this performance company and training studio,” Hagan said. “Half the time I was an instructor, so I taught ‘Introduction to Aerial Silks’ for expats, which was great since all the students spoke English. The other half of the time I developed acts. I even got one of the performances commissioned for a show in Macau, which is viewed as being the Vegas of Hong Kong.”

Unfortunately, his visa expired right before the show, which prohibited him from performing in the production he had so successfully spearheaded. After graduation, Hagan plans to take a gap year to teach full-time at the studio, before pursuing a full-time position and career in finance.

And if that doesn’t work out, he always has his beaver-shooting skills.