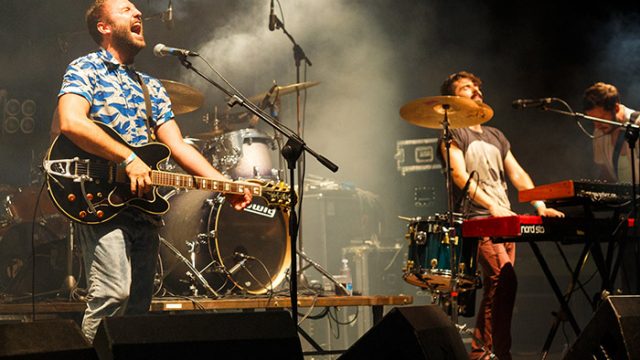 In a search for innovation, some artists turn back the years, reincorporating old styles in fresh ways. Others reach across the aisle in regards to genre, mixing and matching to create a hybrid that hits all the right contemporary notes. The difficult task then becomes seamlessly stitching the two together, making for an overall viable, cohesive work. In the case of Local Natives’s Sunlit Youth (2016), at some points, its classic indie-rock stylings meshes well with the electro-pop, dance music undertones. At other points, the stitches appear to come undone, leaving a poor half-breed of a song in the eyes of both genres.

Local Natives’ previous achievements have come at the hand of their wistful skill on the six-string guitar. Acting center, sharing the audible stage with its simple, yet pointed lyrics, made songs like “Breakers” off of Hummingbird (2013) an enthralling success. Its strong bassline and energetically crescendoed chorus made for a bodily song that filled its listeners with its energy and emotion.

If the group’s early work was as much about the engagement of the body, its work in Sunlit Youth could be categorized as demonstrably more heady. And this may not be a good thing.

The album is littered with electro-pop elements used for varying effects. “Villiany” is a synth-heavy upbeat, cerebral jog through the park. It seems to appeal to the lowest common denominator of synth-pop stylings, complete with long sections of palpable beats and droning keyboard movements. While it is hard to deny that the song does push listeners to internalize the beat, the song in its entirety does little to instill a memorable feeling outside a single listen. Lyrically, the lines “It takes a moment / For your eyes to adjust” appear for one verse of the song. From its premier song, it appears Local Natives are calling us to acclimate to its new approach.

The next song, “Past Lives,” feels overly complex and confounding. It is hard to discern the lead components of the songs, as the song meanders on and on to a dissatisfying conclusion. As the guitar, synth, and keys slowly compound, the mounting energy is squandered and lost in the chaotic progression.

“Fountains of Youth,” released as a single, is one of the album’s most successful songs in its quaint, coy lyrical content. The rebellious, party nature of the electro-pop elements are brought to beautiful fruition through the inclusion of the lyrics “We can do whatever we want / We can say whatever we mean.” The dissident energy is funneled through the airy instrumentals into equally as airy lyrics. Such kinds of compliments feel absent from the previous half of the album. This song is representative of the kind of calculated coupling of content and instruments that augment the listening experience.

From this point on on the album, strangely, the synthetic elements take a considerable backseat, or become nonexistent. Though this transition is not unfathomable, the result is an album that feels like two distinct sets of songs—not one contiguous piece. This may be seen as a way for the group to innovate, while not abandon its past. The album as a whole feels rather uneven as a result.

“Coins” sees the return of the groovy, bouncy chords seen in previous Local Natives’ albums. This song is equipped with harmonies and a vibrant baseline that will surely have the hearts of listeners pattering along. Its ample groove makes for a considerably smooth listen. The opening line, “Time stands still and then one day is gone,” encapsulates the slow journey this song takes you on.

Other songs like “Ellie Alice,” surprisingly incorporate some lovely acoustic progressions, followed by hard-hitting instrumental upticks in keyboards, percussion, and bass. The push-pull effect of this song is one of the strongest on the album, using the differences between the bridge and chorus to bring attention to the lyrical changes of the song.

While Sunlit Youth is, at times, a testament to the possible union of rock and electro-pop, its inconsistent application makes the album suffer as a whole. Not without deeply enjoyable songs, the album is certainly worth a gander, but requires a keen ear to sift through unsavory sounds. The arrogance of a sunkissed youth may have us believing we can do whatever we want. Our ears will have us thinking otherwise.

sunlit youth local natives
Once Considered an ‘Island of Misfit Toys,’ The Rat Gets Summer Facelift
Opting out of SWUG Culture and Focusing on Senior Success