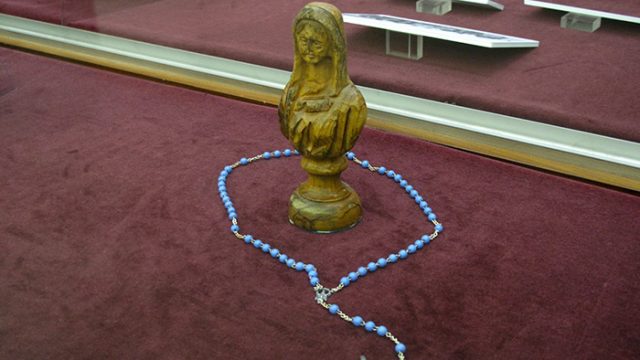 Exhibits on Jesuit and Christian history, texts, and art are more than prevalent at Boston College. These exhibits, for the most part, shine a light on the daily practices and lives of religious figures and aristocrats throughout history. They do not, on the other hand, tend to focus on subjects outside of the domestic or regular affairs of the people they examine. The Missionaries & Linguists exhibit, on display in the halls of the Burns Library through Oct. 7, breaks this mold, exploring the works of Jesuit missionaries and linguists’ evangelizing of exotic peoples across the globe throughout the last few centuries.

While the actual texts and artifacts gathered together in the exhibit’s two showcases don’t necessarily exude excitement or the fantastic nature of these missionaries’ work in Africa, the descriptions gathered by the class that worked on the project do. Students of linguistics professor Margaret Thomas gathered research and created the exhibit in Burns Library after taking her “Classics in Linguistics” class in the spring of 2015. These students’ enthusiasm regarding the project is evident in the passionate phrasing and tone in their mission statement as well as in the descriptions for the several artifacts on display.

The books and artifacts that make up the Missionaries & Linguists exhibit range in their ability to captivate viewers. Pieces of the exhibit covering the personal works of Father Francis Barnum and Father Eugene Buechel and their separate interactions with tribes of Native Americans give the exhibit’s viewers stories that make the display more accessible. While the exhibit explains that missionaries used their knowledge of European and ancient languages to work with the foreign languages and cultures they encountered, one doesn’t really get a sense of how they did so until they come across the descriptions of Barnum and Buechel.

The texts that delve into the Spanish missionaries’ treks in South America in the 17th century and the French missionaries’ work in Africa in the 19th century are much less personal than the pieces focusing on Barnum and Buechel, but still fascinating to an extent. One gets a sense of the complexity innate in these missionaries’ goals of forming a written language for indigenous peoples in foreign lands when observing the dictionaries and catechisms in the collection. Though viewers can only see a few pages of the books on display, the amount of writing seen on these few pages and the books’ large sizes suggest a vast collection of knowledge and linguistic theory in each piece.

To help students and attendees sift through some of the material on display, the Burns Library has put out an iPad with a digital collection of pages from bibles, dictionaries, and catechisms from each of the cultures represented in the exhibit. This iPad allows interested attendees a view of the full scope of these missionaries and linguists’ projects and goals. This collection also demonstrates the vast collection of linguistic works that BC and the Burns Library house.

The Missionaries & Linguists exhibit, while demonstrating Jesuit missionaries’ attempts to bring together different cultures in meaningful ways, also highlights the cultural loss foreign peoples experienced because of the Jesuits. The Jesuits were, in their own minds, enlightening these people that they encountered. While in many ways, the Jesuits did do good for the communities that they interacted with, the exhibit points out the fact that these peoples’ languages and culturally meaningful words and expressions were lost because of the European linguists’ work. This exhibit does a nice job of trying to explain the full consequences of the linguists’ impact on the cultures they encounter.

Though BC has produced more than its fair share of arts exhibits surrounding the Jesuit order, the Missionaries & Linguists exhibit is unique in its exploration of the very specific excursions of Jesuit linguists. While the works on display might not be the most exciting thing to see on campus, all of the stories and concepts that are implied in the exhibit are fascinating to mull over. The passion that the students who put the exhibit together hold is apparent in how meticulously ordered and presented the exhibit is and in the explanations the group put out for their interest in the subject. This passion is what fuels the Missionaries & Linguists exhibit and gives it most of its meaning.

missionaries & linguists
Aerials and International Travel With Senior Connor Hagan
Once Considered an ‘Island of Misfit Toys,’ The Rat Gets Summer Facelift