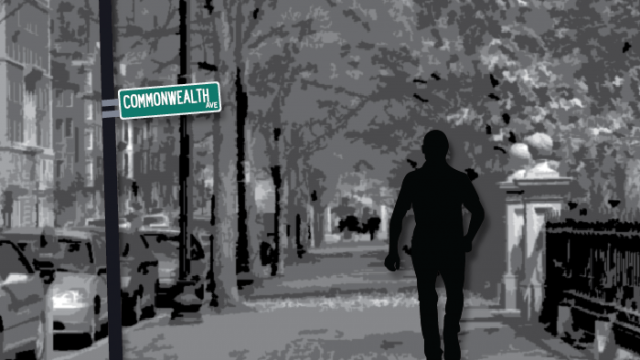 The McMullens and their Museum – Some of us may not have actually stopped by the museum because we don’t appreciate art and/or culture, but it’s still a pleasant sight on our daily 3 a.m. strolls down Comm. Ave. With our hands still trembling from the terror and adrenaline, struggling to light a cigarette and smoke away the memories of what we just saw (eyes like fissures in a dying sky—the monster among us), it’s nice to look over and see the illuminated museum with its fancy glass stuff and other rooftop-type, architecturey doohickeys. Next time we venture out into the never-ending night to do battle with the forces of eternal chaos, it’s nice to know this museum will still be here if we come home.

Donald Glover – In that beautiful year of sunshine and rainbows, 2008, a young thumbmeister surfed the magical world of YouTube and found a video by a group called DerrickComedy. After watching the clip, this young upstart realized that it was time to abandon his dream of selling subprime mortgages and strive to one day write thumb-related journalism for a college newspaper. Now the same guy from the sketch comedy group is the creator and star of a new television show, Atlanta, that has already broken FX ratings records, not to mention his successful music and acting career. Isn’t that just the cat’s pajamas?

Feeling the Ulcer Eating Through Your Stomach Lining – Sitting behind a desk in the library, your face tinged with the sickly light of your laptop, you cover your face with your hands and whimper quietly. Your sunken, bloodshot eyes stare out from behind the greasy, overgrown hair that hangs down like a set of homemade despair-curtains over your face-window. Oh God, even your similes are awful. A strange corrosive feeling rips through your stomach and you know that you’ve finally done it. You’ve given yourself an ulcer. A librarian walks by to let you know the building is closing in five minutes. “My life is pain,” you whisper back. As you collapse on top of your pile of granola crumbs and dying dreams, you think about all the starving children in the world, the war-torn regions, the crippling poverty, the crime and violence, and you still know beyond a doubt that you, a Boston College student, live the hardest life of them all. You think you can hear the angels weeping above, but then you realize that it’s the sound of the second-floor toilet flushing.

The Slow Onslaught of Work – As September creeps toward its end, the papers and test are starting to loom over the horizon. Schedules are tightening like hairy palms around your throat. Columbus Day seems so far away.

Word Counts – The thumb has never felt quite so restricted. There are so many things to indicate approval or disapproval over. It’s impossible to stop talking. The thumb can’t be silenced. What if we just try to make the font smaller? Or what if we just get rid of the rest of this opinions section-type stuff and just make it one big Thumbs Up / Thumbs Down? Would that work? It’s the only option at this point

The World Wide Web – If you’re reading this online you missed out on the joke. For the print version, that last Thumbs Down disappeared off the end of the page. Get it? Now that’s some high-quality humor. But that’s not really possible online, so there’s this. At least you nice people get a little behind-the-scenes look at the TU/TD factory of dreams.