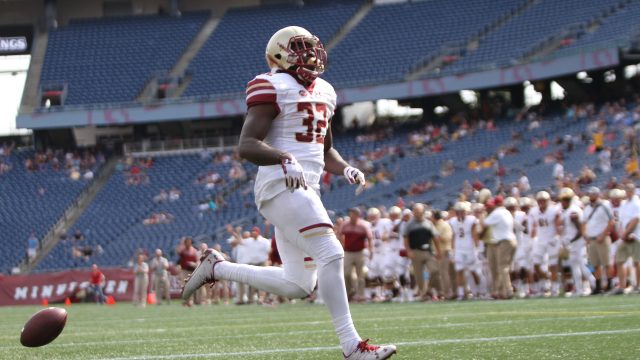 Steve Addazio took to the podium on Monday afternoon, coming off a bad weekend.

“We’ve gone right into the meat grinder with it, and we’ve come out the other end right now, and I think we’ve learned some valuable lessons,” Addazio said, addressing the media. “It will help us moving forward as we move forward into our schedule.”

These don’t sound like the words of a proud FBS football coach, a man directing a cog in one of the nation’s most lucrative businesses. They certainly don’t sound like the words of Addazio, the passionate and hard-nosed head coach of Boston College (1-2, 0-2 Atlantic Coast) football. But losing in a rout, a bitter pill to swallow, can lend a unique perspective to a coach’s mindset.

Following its 49-0 drubbing at the hands of Virginia Tech (2-1, 1-0) in Blacksburg last Saturday, BC has entered a week of introspection, with a focus on the most basic aspects of the game, many of which were forgotten as the Hokies ran roughshod over them.

“We practiced [Sunday],” Addazio said earlier this week. “We went out and we had a fundamentals day, man. Went back to fundamentals: special teams fundamentals, offense-defense fundamentals.”

Fortunately for the Eagles, they enter a brief respite in their schedule at this vulnerable moment. On Saturday, BC will square off against Wagner (2-0), a Staten Island-based FCS team from the Northeast Conference. Thanks to an annual NCAA football tradition, in which major conference teams effectively attempt to purchase wins by scheduling vastly inferior FCS opponents, the Eagles will get an opportunity to transfer their feelings from this past week to the visitor’s locker room at Alumni Stadium.

Fans reminiscing about last season’s 76-0 laugher, with a shortened second half, against Howard, in which the Bison served as a living sacrifice to the Eagles, are probably expecting much the same. And for one of the few times since that game, BC seems poised to follow through on expectations of team success. In fact, as of the writing of this piece, Las Vegas has yet to post a spread for the game, indicative of its view of the contest as more of a scrimmage than a legitimate matchup.

Second-year head coach Jason Houghtaling is tasked with preparing his Wagner team for an opponent far above the level of its usual competition. The Seahawks enter this weekend looking to improve upon their most recent foray into the world of FBS football, a 70-6 setback at the hands of BYU last November.

Houghtaling, the team’s offensive coordinator during its 2012 and 2014 NEC championship seasons, is also tasked with helping his squad rebound from a disastrous 2015 campaign. Last season, Wagner finished 1-10, scoring just 14.3 points per game, while allowing 36.1 points. The Seahawks appear to have made some progress toward this goal through two games in 2016. Though its season-opening victories didn’t exactly come against college football luminaries—Wagner has beaten a Division-II school, St. Anselm, and an NAIA school, Concordia University—the team has posted a 76-16 scoring margin through two games.

Offensively, Houghtaling likes to run a pro-style scheme. He frequently uses two back sets, tight ends, and play action passing. When he ran Wagner’s NEC winning offense in 2014, he favored a ball control approach, racking up over 33 minutes of possession per game. As head coach, he has tried to implement this approach, to varying degrees of success.

Junior Alex Thompson serves as Houghtaling’s signal caller under center. A pocket passer with some deceptive mobility, Thompson is poised for growth in 2016 after a baptism by fire in 2015. Having taken no snaps in 2014, he essentially served as a freshman quarterback last season, starting the final nine games. The lack of experience showed on his stat line—1,085 passing yards, a completion rate barely over 50 percent, and just eight touchdowns to six interceptions. Through two games this season, Thompson has already thrown for 415 yards and four touchdowns, highlighting more comfort with Houghtaling’s system and the college game in general.

Along with Thompson’s growth, Wagner’s pathway to success depends on the continued emergence of junior running back Denzel Knight. After carrying the ball just five times over his first two seasons with the Seahawks, Knight has burst onto the scene over the past two games, with 251 rushing yards and two touchdowns. He averages an impressive nine yards per carry, showing good speed and decisiveness. If Wagner is to return to Houghtaling’s ball control offense, Knight will need to shoulder the load in the coming months.

Against BC, however, expect none of this improvement to show. Wagner’s offensive line will fare quite poorly against a BC defensive line with a significant size and physicality advantage. As a result, both the passing and rushing attacks will suffer. Thompson will have little time to throw passes, especially the deep balls that have given the Eagles trouble in recent weeks. Knight and the Seahawks’ running game will find no holes to run through. Houghtaling’s team will be lucky to string together consecutive first downs, let alone establish control of the ball for any extended period.

If Wagner has any potential for success against the Eagles, it will come on the defensive side of the ball, owing to BC’s offensive struggles dating back to last season. Addazio’s offensive line has failed to form a cohesive unit through three games, beset by the combination of youth and injury, stifling a once potent run game. As a result, quarterback Patrick Towles and the passing game have had to shoulder much of the offensive burden, to the tune of some undesirable results.

Unfortunately for Wagner, it lacks the personnel to make BC into the one-dimensional offense that has stumbled out of the gate in 2016. Against an undersized front seven, expect BC’s rushing attack to finally get on track this week. The offensive line will have a much easier time moving the Seahawks defensive line around. With the running game activated, Towles and the passing game can return to their ideal complementary role. The Eagles should enjoy a much-needed offensive outburst, spending an afternoon away from their early season frustrations.

Though the offense will light up the scoreboard on Saturday, everyone in the Eagles’ locker room knows that it won’t erase the mistakes of the past few weeks. Addazio admitted as much this week, saying that the focus must be on moving forward and improving execution.

“Our goal is we’ve got to go be the best BC team we can be,” he said. “We want to get back going again. And that’s what football is. You can’t wait.”

Especially given their opponent on Saturday, it’s easy to see why the Eagles are so enthusiastic about getting out on the field and working to solve their mistakes.

steve addazio football wagner
Internet Heavy Hitter ‘High Maintenance’ Starts to Deal on HBO
Frank Pole Does “Anything,” While Calvin Harris Asks “Don’t Be A Fool” in Singles This Week