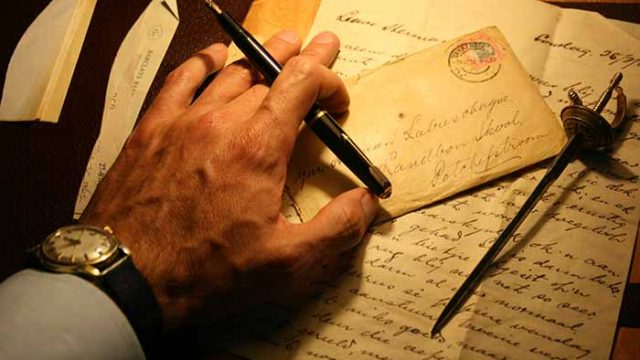 Frustrated yet again, I tore the gold-embossed stationery in two, crumpled both halves together in my hand, and watched as the paper ball sailed five feet through the air before landing with a soft thud in the small trash can I keep in the corner of my bedroom at home.

It was the third card I had wasted in under 10 minutes. Too many times I had either smudged sentences, started to misspell something, or realized I had scrawled the letters a little too clumsily for my liking. If it offered any consolation as far as my paper-tossing talents and office-supply athleticism was concerned, though, at least I was three-for-three.

I needed to try again. My stubborn, 11-year-old self would settle for nothing less than something that at least slightly resembled the artistic elegance and care with which my grandfather crafted every letter of every word in the weekly letters he and I exchanged. I was determined. One of these days, I vowed, the words I wrote would look as pretty as my Papa’s.

Silently cursing all teachers after third grade who preferred printing to cursive—thus rendering my cursive handwriting good enough, but not incredibly graceful—I took another glance at the letter I’d just received from my grandfather that morning. His handwriting was immaculate—each loop and line made with a purposeful stroke of his pen, every letter flowed effortlessly into the next. I looked at the words he had written—typical small-talk topics like how the winter weather in Boynton Beach, Fla., compared to that back in Boston; questions about my elementary-school studies; and the routine well-wishes he’d hoped I’d pass onto my parents and siblings. I remember being confused at how the less-than-scintillating content of the letters—polite conversation and a brief exchange of pleasantries—could carry such a regal aesthetic simply by being scrawled in cursive.

“Handwriting is a disappearing art,” Papa Jerry wrote in one of these letters to me. And I believe it. Aesthetically pleasing and personalized from one individual to another, it’s an underappreciated art form that, apart from a few exceptions, has become all but extinct.

I used to think, back when I was a young, naive third grader who had just been introduced to the wonderful world of cursive, that learning this particular type of penmanship was both a rite of passage and a true privilege. I cherished it as a skill that somehow classified a third-grade kid as just a little bit cooler than she was before being introduced to the odd-looking alphabet. It looked more important than print. I finally knew how to write it. Therefore, I figured, through the transitive property, anything I had to say might be more important, too.

Admittedly, apart from the yearly task of writing thank-you notes forced on me by my mother, I rarely ended up wading willingly into the realm of cursive writing. It became reserved for “special occasions,” a kind of chore or nuisance that I assumed might slow my writing process and potentially stunt creativity. Of course, these and others were my excuses for favoring simplicity over style. I got lazy. Pens gave way to laptop keys while blank Word documents replaced white-lined paper. As it was for most people my age, cursive became an old friend I’d call upon infrequently, a stylistic decision which required an extra effort I deemed wholly unnecessary. For a while, I forgot to appreciate cursive the way my grandfather did—as an unconventional avenue for artistic expression.

Recently, I was reunited with my grandfather’s writing in the form of his handwritten memoir. A birthday gift from my uncle to my grandfather, my uncle requested this journal be filled with the innumerable interesting stories of my Papa’s eventful life. Years later, when it was finally finished, my uncle assigned me the task of deciphering his sentences and transcribing them into a Word document. Every page had been filled with the familiar form of Papa’s cursive, his handwriting gradually becoming shakier with age. Despite its obvious discrepancies from the perfectly penned letters I received as a kid, a wave of comforting familiarity hit me hard.

It’s been years since letters stopped coming and Papa’s particular style of cursive ceased to flow from his pen. Now, I appreciate the unorthodox kind of art my grandfather was a staunch supporter of. Now, I think I understand it the way he did—stylized differently by all, a penmanship as unique as the person who scrawls it.

Now, more than ever, I’d like to send him a thank-you note.

cursive handwriting
BC SLAM! Conjures Up Words for a Breadth of Emotions
Internet Heavy Hitter ‘High Maintenance’ Starts to Deal on HBO