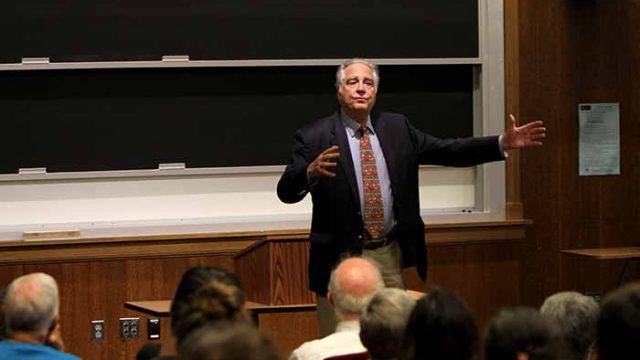 Gerhard Bowering, a professor of Islamic studies at Yale University, gave the first of his six lectures in Boston College’s Gasson Lecture Series on Wednesday. Sponsored by the Jesuit Institute, the lecture was entitled “Engaging Islam: Finding Roots in Scripture and Tradition.”

The crowd, full of mostly professionals and scholars, was captivated by Bowering’s lecture, which predominantly centered on the fundamentals of Islamic culture and the creation of the Islamic religion—tracing all the way back to the Prophet Muhammad.

Bowering began by allowing his audience to envision how widespread Islam is across the world. A religion with a following of between 1.4 and 1.5 billion people, it is only second to Christianity in terms of how large it is. The Islamic diaspora has spread throughout the Middle East and over the Western world in the last 1,400 years.

Bowering spoke about the foundings of Islam, which began when the Prophet Muhammad had a revelation from God. The Quran, which is the basis of Islamic law, theology, and education, is believed to be the word of God.

Prior to teaching at Yale, Bowering taught Islamic studies at the University of Pennsylvania and has been a visiting professor at Princeton University. Bowering currently serves at the editor-in-chief of The Princeton Encylopedia of Islamic Political Thought.

Bowering’s next lecture is on Oct. 12, titled “Seeking the Face of God.”

“Muhammad is the seal of the prophets,” Bowering said. “No other prophets are to come after him.”