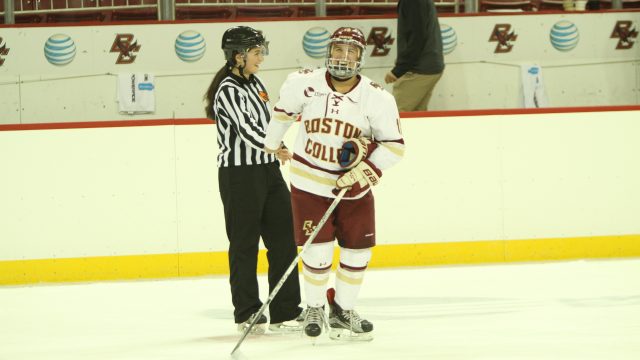 Boston College women’s hockey found familiar faces on the ice with it for the second night in a row, as Dana Trivigno made her debut as a linesman in the Eagles’ exhibition game against the Cambridge Rivulettes. The Rivulettes, a team comprised of women aged 15 to 18 that play in the Provincial Women’s Hockey League in Canada, adjusted well to college play over the course of the game, but ultimately fell 7-1 to the Eagles.

The matchup provided an opportunity for Gabri Switaj to show off her skills, with the goalie racking up five saves over a period and a half. Switaj has appeared in seven games over the past two seasons at BC, largely due to the dominance of Katie Burt between the pipes. With Burt receiving a welcome rest after the Eagles’ 3-2 loss against the NWHL’s Boston Pride, Switaj stepped into the role of starter, and performed well against the shots that came at her.

Scoring for the Eagles began almost immediately—just 59 seconds into the game, Haley McLean combined with the rest of the first line for her first goal of the night. Tori Sullivan followed it right up with a goal of her own at 2:02. The offensive onslaught continued until the last minute of the first period, bookending a dominant 20 minutes for BC. Assistant captain Kristyn Capizzano, who has usually been more of a playmaker than goal-scorer in previous seasons, put in two back-to-back goals herself. McLean closed out the period with a second goal to put the Eagles up 6-0.

In the second period, the Rivulettes made the Eagles work for possession. Though Kenzie Kent knocked the puck in on the power play from a Sarah Verbeek cross-checking penalty, the transfusion of defensive energy kept BC at bay while Cambridge worked to chip away at the 7-0 lead. Goalie Allisa Hitchen, who subbed in for Caitlin Kroetsch halfway through the period, only had to block two shots, while Kroetsch allowed seven of eight shots during her time in between the pipes. This is thanks mostly to the defense, which adjusted to split up the offense as it was making its way to the goal.

After Switaj took her place on the bench to make room for freshman goalie Molly Barrow, the Rivulettes had their chance at revenge. Right after she reached her position between the pipes and just 11 seconds into a Rivulettes power play, Barrow had a puck slip by her courtesy of Verbeek.

Freshmen and sophomores were able to get their sea legs on the ice, more so than against the Pride. Caitrin Lonergan, touted to be the answer to Alex Carpenter’s departure last year upon her graduation, and Erin Connolly, a redshirt freshman, picked up two assists each. Serena Sommerfield also performed in a way that can only be described as nonstop. At one point, the sophomore streaked up the ice with the puck, barrelling through anyone in her way and going straight for the net up the right side. Even when a defender stopped her short, she continued to find places to be to create the next play.

By the third period, the Eagles and Rivulettes had reached a scoring stalemate, but the damage was already done. Each team had its fair share of opportunities in the third—the Rivulettes had two power-play opportunities, while BC had one—but neither could make anything happen on the ice. All the Eagles had to do was run out the clock, and the victory was theirs.

Though not the best assessment of what this team is capable of—playing down to such youthful players that are inexperienced in the college game does not a superstar team make—the game provided an opportunity for less-experienced players to shine and gain confidence on the ice.

“Today I thought was a game where we could get a lot of different players in, try the different situations, see them in those plays, but to gain confidence, not necessarily about playing hockey, but about feeling comfortable on the ice in college,” associate head coach Courtney Kennedy said.