Home » Guevara Explores the Effects of Border Militarization on Immigration 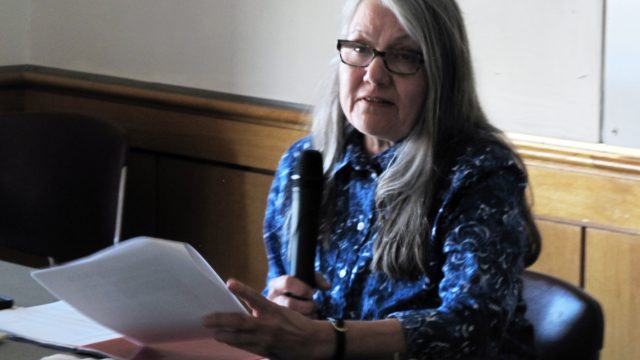 Guevara Explores the Effects of Border Militarization on Immigration

Martha Guevara, a member of CISPES, is a retired Spanish bilingual teacher and current community activist in the Boston area. On Thursday, Guevara spoke as part of a series, entitled “After Obama: What is the future of our ‘Nation of Immigrants?’” hosted by the Center for Human Rights and International Justice.

Guevara recently returned from a two-week delegation in El Salvador conducted by CISPES to study the impact of United States policy, particularly border militarization, on migration. The goal was to understand the factors that encouraged immigration and to make migration an option, but not a necessity.

Guevara began by detailing how she came to be included in the recent delegation that went to El Salvador. Through her work, she experienced the long-standing struggle of the Salvadoran people from afar.

“I felt that I could not pass up this opportunity to hear from Salvadorans on their own soil about their understanding of the issues and about their efforts to address them,” she said.

“There’s definitely an economic component, with high levels of poverty, and a lack of opportunity in the country,” she said of the causes of immigration to the U.S. “There’s a desire for family reunification with relatives in the United States.”

As the presidential election approaches, Guevara noted, the issue of immigration has been a topic of debate in the U.S. Much of this debate, she argued, centers on American interests and fails to recognize the impact of policy proposals, such as border militarization, on people from Central America, specifically Salvadorans.

For example, she said, the Alliance for Prosperity was an American policy that Vice President Joe Biden strongly supported in 2015.

“It promises security and economic opportunity, but it requires acceptance of increased militarization and the privatization of services, perpetuating a culture of authoritarianism and profiteering independence,” she said.

Guevara spoke about the development of a movement of resistance to increasingly oppressive government policies in the 1960s, which largely began among Salvadoran workers, teachers, and university students.

“It is important to point out and recognize the efforts being made in El Salvador to rebuild its society,” Guevara said.

In her account of the deterioration of El Salvador’s economic and political state, Guevara said that the Catholic community embraced Liberation Theology by calling on the Church to accompany the poor in their struggle for a dignified life.

As a result, many of these humanitarian workers have given increased attention to El Salvador’s migrant crisis, as well as to the issues causing it.

Judy Swett, an attendee at the event and member of the Salvadoran Humanitarian Aid and Relief Education (SHARE) Foundation, is among those who work with the people of El Salvador to improve the lives of those who have no choice but to remain amid the violence.

There is also a large coalition of Salvadoran women advocating for their rights.

“They are connected, and they are working so hard … to get women empowered and educated, and they’re succeeding,” Swett said.

After delivering her remarks, Guevara opened the discussion to questions from others attending the event.
Aaron Salzman, MCAS ’20, asked what percentage of El Salvadoran migrants qualified for refugee status.

Guevara stressed that those attempting to flee Central America for the U.S. were required to provide proof of physical threat before they would be considered for asylum. This has not, however, deterred Central American migrants from entering Mexico, a destination for migrants on their journey to the United States.

These migrants, Guevara said, have tripled in number in the last four years.

David Grosser, a member of CISPES, later added that the organization is trying to ensure that anti-immigration features are not included in future foreign aid bills.

“We’re developing a campaign to pressure Congress all around the country,” Grosser said.

As of now, the process of migration from El Salvador and other regions of Central America often results in the separation of families, with many children traveling alone. Those working for organizations such as CISPES hope to find alternatives to these harsh conditions, including improvements to life at home in El Salvador for would-be migrants.

“It’s terribly sad that these … policies are continuing, and what we have to do, is we have to speak up,” Swett said.