Home » Why Wait? BC Should Retire Alex Carpenter’s No. 5 Right Now 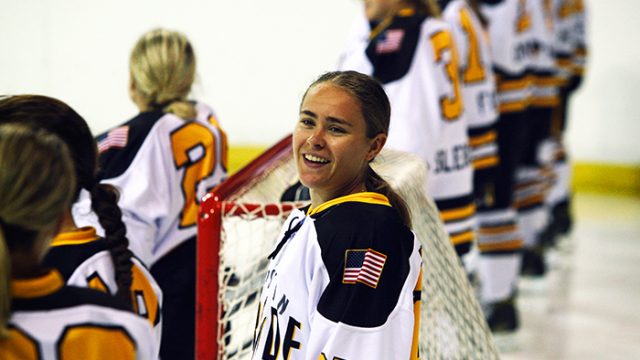 Why Wait? BC Should Retire Alex Carpenter’s No. 5 Right Now

In five years of covering her, it’s rare that we at The Heights caught Alex Carpenter smiling.

Seriously, go back and look at the archives. I’ve covered women’s hockey myself several times and haven’t seen it in person. Don’t even get me started on the hundreds of photos I have cycled through to come up with the perfect featured image or gallery. Every time we captured one of the many amazing moments she created on the ice, Carpenter was locked in. Whether she barrelled at the net or ripped a shot from the blue line, Carpenter displayed a unique intensity at all times.

The only smile that comes to mind was from the Clarkson game, when Haley Skarupa scored her overtime goal to send Boston College to the national championship. But that one wasn’t even for Carpenter’s own accomplishment. And, other than that singular moment, there’s nothing but the utmost focus.

But on Friday night, Carpenter donned a bright smile of beaming joy and bliss to be back home.

It was the first time she took to the ice in Kelley Rink for a game since the NCAA Quarterfinals against Northeastern this March. Now a member of the NWHL’s Boston Pride, Carpenter joined four fellow alumni—Maggie Taverna ’09, Blake Bolden ’13, Emily Field ’15, and Lexi Bender ’16—in an exhibition game against the Eagles, a 3-2 win for the defending Isobel Cup champions.

For 60 minutes, Carpenter carefully reminded us what made her the best in the business. Megan Keller, the best defender in the country, struggled to fight Carpenter off the boards, even with her 5-foot-11 reach. It wasn’t even a competition against BC’s other defenders. Carpenter easily bodied anyone who was in her way to get the puck.

Offensively, Carpenter put on a show. On a Pride power play, she was virtually untouchable. She once attempted a wraparound behind Katie Burt, before doubling back around Toni Ann Miano, shaking the defender out of her skates. She then rested on Burt’s right while the goalie sold out to left, sending a perfect cross-crease pass that was just missed by Gigi Marvin.

For minutes at a time, Carpenter would park herself in front of the net. Any time her blue liners would chuck up a shot at Burt, Carpenter was there to attempt to tip the puck into the twine. Head coach Katie Crowley would send two or three bodies at a time in Carpenter’s direction, knowing full well how dangerous she is.

Oh yeah, she scored a goal, too.

With under a minute remaining in the second period, Carpenter received a pass from Rachel Llanes from behind the net. She sent a clapper from the top of the left circle zipping past Burt’s left shoulder.

Homecomings like this are rarely easy in sports. Not everyone responds well to their favorite player donning different colors in the place where he or she gave them so many memories. Mets fans like me initially cheered for Daniel Murphy when he returned to Citi Field in May. Despite joining the rival Washington Nationals, it was only fitting to pay our respects to Murphy, whose power outburst helped carry New York to the 2015 National League Pennant. But 19 games, seven home runs, and 21 RBIs later, let’s just say Murph isn’t treated so politely in Queens anymore.

It appeared Carpenter’s was no exception. Though there were hugs and pleasantries exchanged after the game, all of that was forgotten while the clock was running. One mini-fight broke out involving Carpenter in front of the Pride’s net. And earlier in the week, I spoke with Tori Sullivan, who jokingly (I think) said that she was looking forward to going up against Carpenter.

But Carpenter’s return still brought back the great memories of her time on the ice at BC. And it got me to thinking how much longer it’ll be until her No. 5 is in the rafters.

There’s no question that Carpenter is the best—and will likely always be the best—player in BC women’s hockey history. She’s a Patty Kazmaier Award winner. She has 134 goals, 145 assists, and 279 points: all three are program bests. Those three basic counting statistics don’t even begin to scrape the surface of the number of times her name is in BC’s record book.

I’d go further than that. It’s hard to go cross sport and say who is the “best.” And there’s no doubt that all of BC’s sports have had plenty of phenomenal athletes. (Forgive me if I forget a few.) BC has had its share of football greats: Matt Ryan, Luke Kuechly, Doug Flutie. Men’s basketball has had a few, in Troy Bell, Dana Barros, and Jared Dudley. Women’s basketball has Carolyn Swords. And, of course, men’s hockey has had three Hobey Baker winners—David Emma, Mike Mottau, and Johnny Gaudreau—plus countless NHL stars.

But has there ever been a single player more dominant than Carpenter while at BC? All of those players had great careers, but none were as head and shoulders above the competition from the second they put on the maroon and gold as Carpenter. In her four seasons at BC, she led the team in points. Her freshman year, she was sixth in points in Hockey East. The other three seasons, she led the conference.

In five years—one of which she redshirted to win a silver medal at the 2014 Sochi Olympics for the United States—Carpenter transformed the Eagles. When she began here, Crowley was reworking a program into one that deserved national respect. They had two Frozen Four appearances, four Beanpots, and one Hockey East title in 17 seasons. In the five years since, BC has four Frozen Fours, two Beanpots, three Hockey East regular-season titles, a Hockey East tournament title, and an NCAA Championship game appearance.

More importantly, Carpenter has made the Eagles the hottest ticket in all of college hockey. She has made Chestnut Hill the No. 1 place for recruits, and Crowley and associate head coach Courtney Kennedy the two everyone wants to play for. Look no further than this year’s recruiting class to prove that. Caroline Ross, Delaney Belinskas, and Bridget McCarthy all have impressive resumes.

Caitrin Lonergan highlights them all. She comes in as a two-time member of the United States U-18 team. She won the New England Division I Player of the Year Award. If things break right, Lonergan is widely expected to be the next Carpenter. She even showed flashes of her potential in Carpenter’s presence, with a goal on Thursday.

Yet, as she usually does, Carpenter made the show about her on Thursday. Not on purpose, of course, but by going out and being the best player on the ice. If it’s the last time we see her play at Kelley Rink, she certainly put on a show.

But it won’t be the last time she does step on the ice. The next time will be in formal attire, over a red carpet, as her No. 5 is raised alongside the other banners. That day shouldn’t be too far away.