Inequities in race, gender, sexuality, and socioeconomic status are just some of the issues the Boisi Center for Religion and American Public Life will examine this year during its student conversation series.

The Boisi Center will host its first event on Wednesday: Speak, Stand, Sit or Scream? How Young People Engage in Politics and the World in 2016. The town hall-style event will take place in Fulton 511 from 7 to 8:30 p.m.

The event will feature a panel of four students: Craig Ford, GSAS ’18, Najat Goso, MCAS ’18, Isra Hussain, MCAS ’17, and Russell Simons, MCAS ’17. The panelists will be asked a few questions at the beginning of the event to set the tone of the discussion before opening up a larger group conversation.
The main question of the evening will be about defining the millennial generation and what it means to grow up in a world filled with massive amounts of technology that expose the young generation to what is going on in the world, Hussain said.

Hussain believes that the millennial generation has been raised in a society that strictly defines success as making a lot of money or being famous, and Boston College students forget the values they learned in their philosophy and theology classes and do not actively confront systemic injustices.

“Until we have these conversations and force ourselves to be uncomfortable, we will merely be continuing these dangerous and exclusive cycles, losing the possibility for structural change,” Hussein said. “I hope this event provides a stepping stone for these conversations between students and faculty [and] launches an important discourse that may be missing from some facets of this campus.”

The center hopes the event will open a dialogue among students on campus.

“By sharing bits of our stories, discussing in an open way what attending a Jesuit university has taught us amid national events, and searching together for the answers to still elusive questions, I’m hoping students will hear some of their own concerns and thoughts talked-about in new and enlightening ways,” Simmons said.

Erik Owens, an associate professor of the practice in theology and international studies and the interim director of the Boisi Center, has been actively involved in planning the event.

“We are hoping that this different kind of format, that is not based on everyone just listening, but rather everyone engaging in a thoughtful way, will provide a bigger, open forum on campus.”

—Erik Owens, an associate professor of the practice in theology and international studies and the interim director of the Boisi Center

“We are hoping that this different kind of format, that is not based on everyone listening, but rather everyone engaging in a thoughtful way, will provide a bigger open forum on campus,” Owens said.

The Boisi Center is named after Geoffrey and Irene Boisi, who made the contribution that created the center in 2000. Alan Wolfe, a political science professor, was the director of the Boisi Center until this fall, when Owens took over as interim director after serving as the assistant director for 10 years. In July, Mark Massa, S.J., formerly the Dean of the School of Theology and Ministry, will take over as the director of the center.

“One primary function of the center is to serve as a forum for rigorous thinking about religion and American public life,” Owens said. “We try to convene good conversations about things that matter.”

The Boisi Center does not take a partisan position on politics and does not represent the interests of the Catholic Church. The Center instead strives to have diverse voices within its programs that will address issues that are of great concern to Catholics around the world.

“We don’t focus on issues that are about interiority, internal spirituality, or individuality, as much as religious ideas and institutions as they impact our common lives together,” Owens said.

In the past 16 years, the Center has held hundreds of events on campus that speak to these questions. The Center hosts visiting scholars each year, who come from around the world to contribute to the center’s mission and engage with the BC community. The Center also hosts delegations, such as the U.S. State Department, that seek to have a conversation about religion and American public life.

The Boisi Center leads a research program in which faculty members study their areas of specialty. These faculty members teach courses in theology, political science, and international affairs to students on campus.

The Center also hosts an annual seminar for both graduate and undergraduate students that features a study on a topic in religion and public life. The students meet each month to discuss the topic. The Center has not yet decided this year’s seminar topic.

This year, the Center has decided to focus its efforts on creating more events in which students can engage in a conversation about contemporary issues relating to religion and public life through the new town hall-style format.

“We are hoping that this different kind of format, that is not based on everyone just listening, but rather everyone engaging in a thoughtful way, will provide a bigger, open forum on campus,” Owens said.

The Boisi Center will hold several other events this year, including an event titled Slavery and the Making of American Capitalism, and an event titled An Ethics for the Coming Storm: A Theological Reflection on Climate Change.

“We are really excited about these events,” Owens said. “This is a very busy semester for us.” 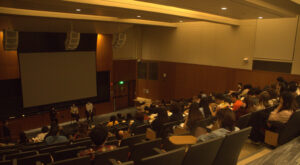