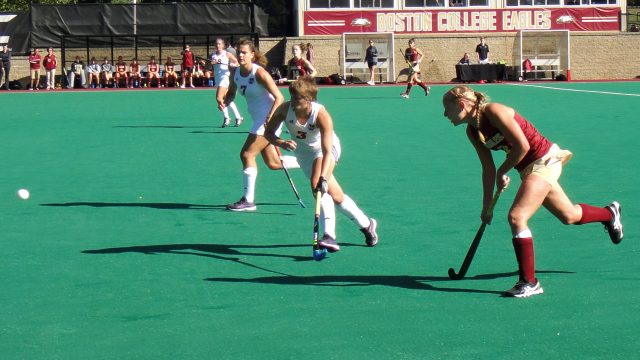 It wasn’t supposed to happen like this. Boston College field hockey was poised to bounce back from an overtime loss at home to No. 16 Virginia with a resounding victory against the University of Massachusetts on Sunday. The No. 9 Eagles had struggled recently, dropping games to ranked opponents like Northwestern, Maryland, and Syracuse. But the team still had enough talent to recover from these losses, especially against a weaker opponent like UMass.

Nobody told that to UMass, though. The Minutewomen stormed onto the Newton Field Hockey Complex and refused to quit, coming back from deficits twice to force overtime. BC showed flashes of promise but cold not build up enough momentum to seize control of the game. In the end, UMass pulled out a 3-2 overtime victory, dipping BC’s record below .500.

UMass (5-4, 1-4 Atlantic 10) attacked first, recording two shots on goal early in the game. Five minutes into the action, Nicole Miller and Anne Dijkstra tested BC (4-5, 1-2 Atlantic Coast) and goalkeeper Audra Hampsch. Five minutes later, Nicole Kuerzi fired a shot on goal. Hampsch protected the net on each of these shots, making saves and handling the pressure well early in the game.

Lucy Lytle opened up shooting for BC. At first, UMass goalkeeper Emily Hazard denied her attempts, but Lytle would not be stifled for long. Almost 23 minutes into play, Brigid Wood sent a pass flying toward the goal. Lytle’s stick found the ball, and she poked it past Hazard for the first goal of the game. It was Lytle’s fourth goal of the season and freshman Wood’s first assist of her college career.

The Eagles’ lead would not last long. About five minutes later, the Minutewomen managed to tie the score up at one apiece. Izzie Delario controlled the ball along the left side of the field, drawing BC defenders towards her. As she approached the goal, she ripped a cross to the cluster of defenders and teammates in front of the net. UMass forward Nicole Miller was waiting for the ball, and she sent it flying past Hampsch for the score.

UMass continued to test Hampsch in the first half. While BC would not get another shot off, the Minutewomen managed to rip two more shots out. Hampsch handled another Miller shot, preserving the tie, and Sarah Hawkshaw’s shot in the waning minutes of the half went wide. The teams carried a 1-1 tie into halftime, setting up a second-half showdown.

The Eagles came out of the break firing on all cylinders. They started the second half with a penalty corner and three shots. Despite the efforts from Eryn McCoy, Chelcie Mendonça, and Leah Frome, BC was unable to break the deadlock. McCoy’s shot went wide, Hazard saved Mendonca’s shot, and Frome’s was blocked before it reached the goalkeeper. With all the pressure, it seemed inevitable that the Eagles would find the back of the net before too long. Once again, it was Lytle who managed to record the goal for BC.

The Eagles were awarded another penalty corner less than seven minutes into the half. Frederique Haverhals received the ball at the top of the D. She fired a shot off towards Hazard, but it took a deflection off of Lytle. The ball flew high and past Hazard into the back of the net, giving BC a 2-1 lead. The second goal was a record-setting one for Lytle—it was her first career multi-goal game.

The Minutewomen responded with two quick shots immediately following the goal. Another blocked shot and another Hampsch save denied a tying goal for UMass—at least for a little while. In the 54th minute, UMass ripped a long shot towards the goal. BC’s defense managed to deflect the shot before it reached Hampsch, but the Eagles failed to secure possession of the ball. Hawkshaw gathered the rebound in and sent a shot flying past Hampsch, bringing the score to 2-2.

Neither team would manage to break the deadlock for the rest of the second half. UMass carried the wave of momentum, recording five more shots before the end of regulation. BC, by comparison, only managed one—a Frome shot that was blocked by the Minutewomen defense.

The Eagles opened up shooting in overtime. McCoy fired a shot on Hazard, but the ball went wide. After that, the teams traded shots for several minutes, with neither able to break through the tie for the game-winning goal. The Minutewomen received a lucky break when BC’s Ymke Rose Gote was penalized with a yellow card less than nine minutes into the overtime period. With BC playing one man down for at least five minutes, UMass had the advantage and made sure to benefit from it.

Less than three minutes later, Dijkstra found herself facing down a BC defender in possession of the ball. Dijkstra made her move, stealing the ball and slipping past the defender for an unobstructed shot on goal. Hampsch moved out, trying to deny her the shot, but it was too late. Dijkstra fired a shot low to the ground, passing Hampsch for the game-winning goal.

It was BC’s second overtime home loss in two games, made even tougher because, on paper, the Eagles are a much better team than the Minutewomen. But UMass bested BC in several crucial categories, boosting its chances of a win. The Minutewomen outshot the Eagles 20 to 14. UMass was also more accurate than BC, managing 12 shots on goal compared to BC’s six.

After the game, head coach Kelly Doton told BCEagles.com that she believes her team just couldn’t build up the momentum to outlast UMass today.

“You could definitely tell their heart and desire,” she said. “They really wanted to beat us today and they got the end result in overtime.”