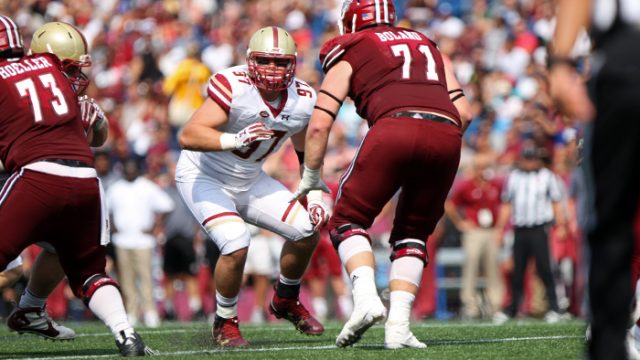 Buffalo matchup offers BC an opportunity to find itself offensively

Perhaps Boston College fans are preparing to walk into Alumni Stadium this Saturday to watch BC defeat “just another nonconference opponent.” But, in reality, they know more about this Mid-American Conference foe than they think.

It’s simple. Look no further than the Eagles themselves. On paper, the University of Buffalo and BC are nearly identical on the offensive side of the ball.

Both BC (2-2, 0-2 Atlantic Coast) and the Bulls (1-2) feature rush-heavy offenses, averaging 40.5 and 38.7 attempts per game on the ground, respectively. And oddly enough, each has a quarterback as its second-leading rusher. Patrick Towles has scrambled for 166 yards and three touchdowns for the Eagles, and Tyree Jackson has carried the ball for 181 and a pair of touchdowns for Buffalo.

Despite a three-year difference in age, Towles and Jackson are nearly identical throwing the football. The two have each completed 41 passes. The Buffalo redshirt freshman throws for 144 yards per game, while Towles is right on his heels with 143 per game.

But the similarities stop there. According to ESPN, BC’s defense is ranked No. 10 in the country in total yards allowed, 23 spots ahead of this week’s visiting opponent. And after all, the Eagles play in the ACC, a Power Five, while the Bulls reside in the Mid-American Conference.

Nevertheless, Buffalo is coming off of a 23-20 overtime victory over previously undefeated Army. And the Eagles have not exactly been playing at an ACC level, considering their last conference win was 668 days ago.

If BC wants to avoid an embarrassing loss on Parents’ Weekend, it must utilize a balanced offensive attack. Yes, forcing the ball down Buffalo’s throat may appear promising, as the Bulls are allowing 291 yards rushing per game—109th in the nation. But the Eagles need to give Towles a chance to sling the ball. Head coach Steve Addazio addressed this concern in his Tuesday press conference. Addazio wishes to return to the mix of run and pass plays that he called in BC’s opener versus Georgia Tech. When it comes to the ACC, running the the ball on the first three downs will rarely result in a substantial drive, especially for BC. Just look at the Virginia Tech tape.

Getting out to a fast start will be crucial for BC this weekend, not only to take the pressure off the defense, but to set a precedent for future games. The Eagles have yet to score first, not even in last week’s home opener against FCS opponent Wagner College. Remember, No. 5 Clemson ventures to Chestnut Hill in a mere week and a half. Forfeiting a slow start to Deshaun Watson and the Tigers could very well take BC out of the game.

The redshirt-senior quarterback needs to settle into a rhythm this Saturday. In the first four games of the season, Towles has had a tendency to wait for the play to develop in the pocket. While this can occasionally open up a receiver downfield, he would be better off getting the ball out more quickly. Additionally, BC’s Achilles’ heel has been third-down conversions—the team has only extended the drive on third down 32.8 percent of the time. If Towles can dish out short completions, the Eagles will create manageable third downs to potentially extend the drive. With a second or third and short, the coaching staff has flexibility to pick and choose among BC’s backfield: Myles Willis, Jonathan Hilliman, Davon Jones, or even Towles himself.

The longer the series, the better chance BC has to score, or at the very least, pin Buffalo deep in its own territory.

After picking up a handful of first downs, look for the Eagles to test Buffalo’s secondary, calling the type of plays that swing momentum. In both of the Eagles’ wins, wide receiver Jeff Smith has hauled in touchdown receptions of 46 and 58 yards, respectively.

The sophomore wide receiver finds value in these kinds of plays.

“Flipping the field, getting points on the board definitely helps,” Smith said. “We just have to make sure we continue to execute those plays, as well as all of our plays.”

For a team that primarily favors the ground, an occasional deep threat sometimes forces the defense to play soft, even if the pass attempt is incomplete. BC should cater to Towles’ strong arm and take shots down the field early against the Bulls.

This nonconference matchup is a chance for the Eagles to take a stride, particularly on the offensive side of the ball, but more importantly, to tack on another “W.”

“We’ve got to keep growing, got to keep developing,” Addazio said. “The ultimate goal in this game, no matter what, is to win and get to 3-2.”

That being said, BC cannot overlook a Buffalo team that is trying to put together its second-straight upset. Maybe the drop in temperature will serve as a wake-up call for BC. If the Eagles want anything to do with bowl season, they must win now. And the players know it.

“It’s a no-brainer,” Towles said. “We can’t afford to drop this one. You can look at it and say there’s games that could go either way, and we’ll still be okay. This is one we can’t afford to lose, no matter which way you look at it.”