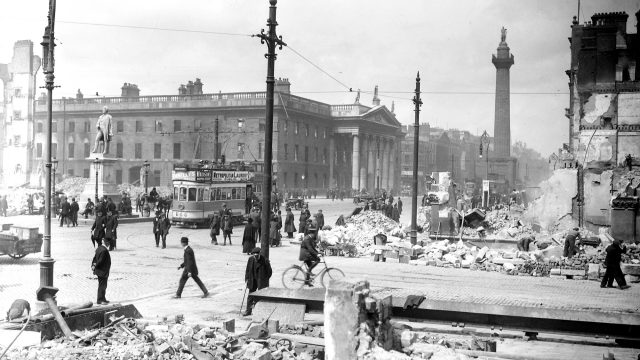 During Easter week of 1916, an armed rebellion led by the Irish Republican Brotherhood took place in Dublin, with smaller insurrections scattered throughout the rest of Ireland. This rebellion stemmed from a great deal of oppression of the Catholic Irish peasantry by its British rulers over centuries. Creator and writer Bríona Nic Dhiarmada provides a 90-minute snapshot of the year 1916 and its place in the struggle of the Irish with her documentary 1916: The Irish Rebellion. In such a short time, Nic Dhiarmada does a remarkably good job of presenting a wealth of information and content. Irish actor Liam Neeson lends his voice for all of the narration. It is readily apparent that Nic Dhiarmada knows a great deal about the Easter Rising and its causes and events.

The documentary begins with a brief overview of the roots of the rebellion. Britain had united the Kingdom of Great Britain and the Kingdom of Ireland and had abolished the Irish Parliament. British exploitation of the Irish prompted the Home Rule movement, a political idea that sought to gain the Irish rule of Ireland while remaining in the United Kingdom. This movement was stymied, however, by various British parliament members. The third time Home Rule was proposed in Parliament, it was put on indefinite hold at the onset of World War I. This begins the main focus of the documentary.

The documentary follows the main organizers of the rebellion, Patrick Pearse, James Connolly, Tom Clarke, and others through historical accounts, primary sources, and general narration. Most compelling, this documentary doesn’t canonize or demonize the events that occurred. When Nic Dhiarmada spoke after the film, she talked about how at the 50th anniversary of the Rising, there were 53 hours of radio broadcast aired about the story, making any rebel into a hero and any British person into a one-dimensional villain. She then went on to discuss how just 10 years later, there was no commemoration of the Rising and that the rebels were cast in a very bad light.

Nic Dhiarmada demonstrated this goal with her inclusion of World War I. When the war started, most of the British troops—and many Irish troops—went to the continent to fight for their country. The leaders of the rebellion saw this as the perfect opportunity to further their cause and thus planned and carried out the rebellion during the war. The fact that the Irish independence leaders took advantage of a horrific conflict does not reflect favorably on the cause. In addition, the Irish rebellion bought arms from the Germans, essentially funding the war effort of the opposing side.

Many Irish people, even those who supported Irish independence, did not appreciate the rebellion. They felt that it was done in the wrong way or at the wrong time. But Nic Dhiarmada did not undervalue the persecution and oppression of the Irish people that prompted it. Most of the British treated the Irish as second-class citizens, with extreme forced work or brutal evictions. The unapologetic presentation of the events that occurred made for a more refreshing viewing experience.

Nic Dhiarmada includes archived footage, and when it refers to a place that has no archived footage, modern day video is shown. This contrast between the old and the new helps to liven up what might otherwise feel like a history lesson. For those who enjoy Irish history or have Irish heritage, this documentary is a must-watch.

irish rebellion 1916: the irish rebellion
Passenger’s Latest Album is Broken as the Morning, Washed Up as the Sea
“What Will Parents’ Weekend Reveal To Your Parents?”