Home » Four Experts Speak About Marketing, Technology in Their Fields 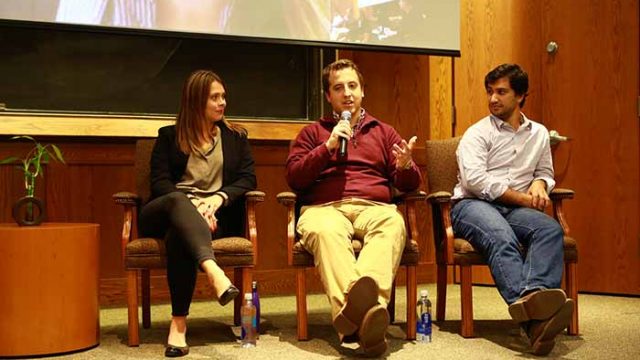 Four Experts Speak About Marketing, Technology in Their Fields

There’s no question that technology has completely changed the field of marketing, shifting the focus from traditional methods of print and TV advertising to digital platforms, and it’s not stopping anytime soon.

The Marketing Academy of Boston College (MABC) kicked off the year with its first event, Marketing x Tech, on Monday night in Fulton. Four professionals from Google, DigitasLBi, HubSpot, and Glassdoor spoke about their experiences in the industry and shared their insights on the field.

Moderated by Jackson Rettig, MABC’s co-president and CSOM ’17, and Anumita Das, its vice president of finance and CSOM ’17, the panel featured three BC alumni—Matt Shapiro ’14, an account manager at Google; Jenni Mannion ’15, an account executive at DigitasLBi; and John Ippolito ’15, an inbound marketing specialist at HubSpot. They were joined by Kira Federer, a product marketing manager at Glassdoor who graduated from the University of South Carolina in 2008, via video call.

As they introduced themselves, they explained their individual responsibilities at their companies and the different role technology plays in each of their jobs.

Having previously interned at a cloud startup where he ran an AdWords campaign, Shapiro was able to use this knowledge at his current position working in B2B at Google, where he is responsible for selling ads. He describes his role as a a trusted partner and consultant to the business rather than a vendor making a sales pitch

“We try to tell all of our clients, ‘Hey, look, your mobile moment’s coming. Start bringing more dollars into mobile, and take it away from desktop and all these other traditional sources,’” Shapiro said. “Mobile is the future. People are literally on their mobile devices hours and hours in a day.”

He pointed out that the key is not how often the advertisers show up on mobile platforms, but for which moments they are present. For example, an advertiser would want to be present at the exact moment when someone is using a mobile device to look for a pair of shoes or a pizza restaurant.

“Technology and marketing is not separate. It is one. They’re just so intertwined, it’s almost hard to see the difference in a lot of ways.”

Mannion also works in business relations in her role as an account executive at DigitasLBi, but focuses on the content-creation side. She works with the project manager to ensure that all aspects of a campaign are on track, whether it’s an email campaign or an online advertisement campaign. She also works with the creative, analytic, and technology teams to produce, aggregate, and eventually publish the content.

“It takes so many teams to get one landing page to launch or one online campaign to go live or a site to go live—really anything you’re working on,” Mannion said. “The amount of people that need to touch one little ATM ad is crazy.”

But in the end, it’s all worth it, she said.

For Ippolito, both content and sales play a major part in his responsibilities with inbound marketing at HubSpot, which include identifying and selling the company’s software to marketing agencies in the Austin and San Antonio area. After selling them, he coaches and consults the new businesses in their own marketing strategies.

“Marketing, particularly in my own personal role, turns what would be a decent sales role into a really fantastic place to sell,” Ippolito said. “Inbound marketing is about attracting people to your sales reps, and we do that through content. Content is key at the end of the day, we preach that.”

In her role as product marketing manager at Glassdoor, Federer no longer focuses on sales, but her background in sales allowed her to better understand the psyche of a buyer and to efficiently position products for consumers. As technology continues to impact marketing, one trend she has noticed is the rising importance of personalization.

“We’re recognizing that people are motivated by different things and that we only have one chance, sometimes, to capture their attention,” she said.

To conclude, the panel members shared their advice for pursuing a career in the fields of marketing and technology.

“Technology and marketing is not separate,” Mannion said. “It is one. They’re just so intertwined, it’s almost hard to see the difference in a lot of ways.”