Home » ‘Stories Unite Us and Bring Us Together,’ Wesner Hosts Agape Lunch 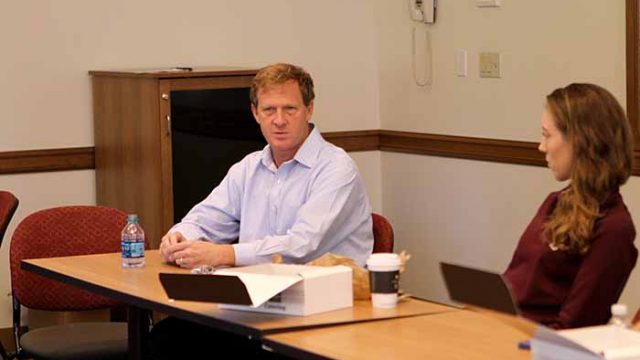 ‘Stories Unite Us and Bring Us Together,’ Wesner Hosts Agape Lunch

Tom Wesner wants students to use their time as undergraduates to question the world around them.

Wesner, a business law professor, spoke at an Agape Latte lunch Monday hosted by The Church in the 21st Century Center and Campus Ministry as part of Espresso Your Faith week. He began the discussion by asking each student why they wanted to attend the  lunch. Students’ responses ranged from being a frequent attendee of Agape Latte programs, to not wanting to miss an opportunity to hear Wesner speak, and to simply being interested in having a good dialogue over a free lunch.

Wesner then recalled his first experience with Agape Latte last year, and how appreciative he was to be able to discuss his walk of faith again. Wesner emphasized this metaphor, the walk of faith, to express how we are all companions walking and stumbling together on a journey of faith.

Wesner said Agape Latte has given students the gift of hearing the faith stories of professors, faculty, and even actors, as well as the gift of allowing these speakers to reflect on and share their journeys.

“Stories unite us and bring us together,” he said.

Frequently, Wesner touched upon how the Jesuit faith has influenced BC over time. Wesner reflected on his time as a BC undergraduate, and how he felt directly connected to the history of the school through the Jesuit priests that taught him. While Wesner noted that this connection may not currently be as strong, he said that BC is more intentional in creating environments in which students can talk about, learn about, and share their faith.

“Every day you’re maturing exponentially, maybe more than at any point in your lives,” he said.

“It’s a powerful message to our students, to take yourselves seriously, and to see more possibility than you can even imagine … from hard work and faith and prayer, every day and all the time.”

This questioning, Wesner thinks, is more important in modern times due to the generational gaps that are present in society. Wesner talked about how his generation raised ours to be fearful, and how the cold and impersonal internet is blocking us from communicating.

He also mentioned how more and more topics are becoming taboo, like money, politics, and even faith. Wesner said that questioning and finding your faith is harder than ever, but because of that more important, too.

Wesner spoke about the importance of finding partners in conversation and making the most of our Jesuit education.

“You aren’t worthy of a Jesuit education unless you give it away,” he said a Jesuit priest told him as an undergraduate.

Wesner built on this advice by saying that every student at the lunch was already winning in life by being accepted to BC, but we are not worthy of our winnings unless we actively give back through prayer, faith, conversation, service, and seeking fulfillment in our careers.

As the session concluded, Wesner opened the floor to students to ask questions for discussion.

Kathleen O’Connor, CSOM ’17, asked how young people today should choose between jobs they are passionate about and corporate jobs that they are more likely to take for financial reasons. Wesner’s response was that it may be necessary to take a job that merely pays the bills in order to gain skills and afford to live. This job, however, will not be satisfying. Once a person becomes financially stable, he should consider switching into a position that he feels he is being called to.

“You’re already going to win, you don’t need to focus your life on making more money because you already won,” he said.

Wesner said he teaches his students in his business law class to ask questions and to be skeptical. He believes that everyone should engage in dialogue over life’s questions, because we have all been blessed to be in the position to question things and make decisions based on seeking happiness.

Most of all, Wesner asked the students present to listen to the call the Jesuit faith was sending them.

“It’s a powerful message to our students, to take yourselves seriously, and to see more possibility than you can even imagine … from hard work and faith and prayer, every day and all the time,” he said. 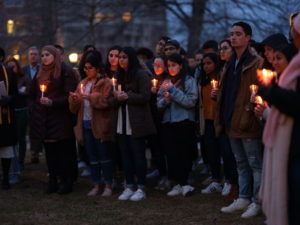