Home » Internal Musings on the State of Boston College Athletics 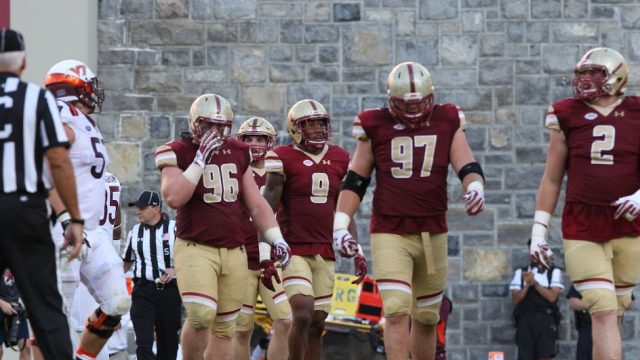 Internal Musings on the State of Boston College Athletics

INT. OUTSIDE THE PLEX – LATE MORNING

*John, ever the optimist, is super excited to be tailgating on a beautiful September morning. He’s so excited that he’s speaking out loud to himself.*

“Football is back, baby. The birds are chirping, the burgers are grilling, the band is marching. I love football season.”

*John’s deep, hidden pessimism regarding all things BC athletics interjects. He comes out from time to time to remind me that time is a flat circle and that we’re just stuck in one big cycle of mediocrity.*

“And the stands are empty, the emptiest they’ve been since Alumni Stadium opened, actually.”

(He comes out from time to time to remind me that time is a flat circle and that we’re just stuck in one big cycle of mediocrity.)

“C’mon, man, we’re gonna get a win against Wagner to lift the spirits. Patrick Towles can throw the ball, and Jeff Smith looks like a real threat down the field with Patty chucking it to him. That’s the kind of offensive excitement I can get behind.”

“Actually, things have actually gotten worse from last year. We lost 49-0 to Virginia Tech. Do you realize how ridiculous it is that there were new lows to hit after going winless in the ACC, and that BC has already hit them 4 games into the season?”

(I must tune him out and enjoy these wings and a cold brew.)

(The inner pessimist is particularly stubborn today. And loud.)

“No comment on that one. Anyways, what about men’s soccer? They’ve been ranked high so far this season, have a solid ACC win against Duke under their belt, and they’ve got a ton of depth and youth. The future is bright.”

“Don’t forget they were blanked by Syracuse 2-0 and just got pummeled by North Carolina to the tune of 5-0. BC lost to Wake Forest 5-0 last season. Remember, time is a flat circle. We just can’t compete in the ACC, anywhere.”

“Across the board, BC has a really strong athletic program, with a ton of teams that are competitive in a tough conference. Lacrosse, field hockey, men’s and women’s soccer, baseball, not to mention an incredible sailing program.”

“Yeah, but we’re absolutely dreadful where it really matters. It’s all about the money, man. And right now, we’re not raking in much dough between men’s basketball and football. How can the athletic program be sustainable with this level of play? A bowl game is not looking too realistic right now. It’s just too expensive to operate so many Division I programs in the ultra-competitive ACC. We’ve got zero facilities, and BC is a frozen tundra for three months of the school year. Not gonna help recruitment, which in turn is not gonna make us competitive, which in turn is not going to make us money. Simple as that.”

“You’re missing the whole point about being a student at BC. We hold academics on the same level as athletics. We could probably recruit better athletes, but we’re losing out to schools like North Carolina, where athletes can take Home Economics and write one single-page paper the whole semester for an A. We’re all about the whole person here at BC, and if that means fewer titles, so be it. We’ve got strong character, and it’s even more special when we make strong tournament runs like baseball and men’s soccer did last year. Money isn’t everything.”

“I’m not done yet! On top of all that, we’ve got our beloved hockey. A consistently elite program that has a history of titles in a city with a long and rich history of the sport. It’s truly special to be a part of something that not many other schools can claim.”

“In Jerry York We Trust. He’s gonna bring in some more solid recruits, as he always does, and keep the good hockey flowing. Can’t wait. But for right now, I’m soaking in the game-day experience that I love.”

“You want to talk about game-day experience? I’ll talk about game-day experience. There is no space in the crowded suburb to begin with, and to add to that the rich, stuck-up neighbors don’t want to sniff any kind of drunken revelry on game day. Shea Field is too restrictive as a result, and the wristband business is just nonsense. While we’re on the facilities subject, the game-day experience would be much better for other sports like soccer, lacrosse, and field hockey if they didn’t have to play on Newton. A centralized athletic area at the heart of campus would breed more ardent fandom, duh. And now they’re going to move the beloved baseball team to Brighton? You can dream all you want, but this school is just in a downward spiral and not destined for much athletic stardom on the national level again.”

“It’s not so long ago that BC was competitive in both basketball and football. Have faith that the next Jerry York-type coach/deity will come around and turn those teams around.”

“I say blow it all up. Cut a bunch of Division I sports to save money. Go back to the Big East in basketball. BC athletics stink.”

“Have you forgotten BC’s motto, “Ever to Excel”? We give a lot of crap to BC athletics for being subpar. But take into account that we have the most varsity sports at 31, so we are excelling across the board. We hold our athletes to a higher level on, and especially off, the field. We are at a huge disadvantage in the ACC when it comes to location. You really expect us to compete with the likes of Miami and North Carolina? We are punching above our weight in the ACC, and we’ve done it in many sports through the years. Take men’s soccer this year, for example. Yes, it lost to Syracuse and got crushed by UNC, but it is ranked 11th in the nation in RPI because of just how good the ACC is. That’s something I can get behind.”

“I’m sorry, I can’t hear over the sound of all the money that is going down the drain thanks to football and basketball. Men’s soccer won’t even be around soon if BC sports can’t sustain themselves. We need new leadership and better coaches, ASAP.”

“Well, let’s just see how you feel after you experience some Friday Night Lights and a shot at Clemson in primetime.”

*John exits the scene and heads toward the football stadium.*

“Forget that other guy, I’m so going to enjoy one whole half of BC taking care of Wagner. I may be optimistic first, but even I’m not going stick around for all of a football game versus an FCS opponent. Someday, though, every game will be a much bigger deal. I think.”

funny
Pops Take on the Heights, Amy Schumer, and Green Day This Weekend in the Arts
HUBweek: A Balance Between the Absurd and the Practical