Home » Mike Debus Paints with the Untapped Colors in Us All 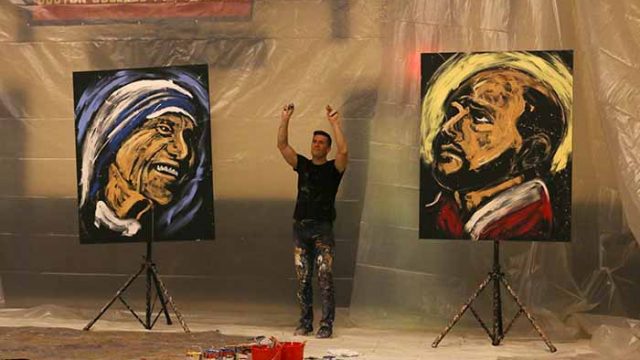 Mike Debus Paints with the Untapped Colors in Us All

This Monday, Sept. 26, the grand halls of Gasson 100 were enveloped in banners of protective plastic. Gospel tunes blared from the speakers dotting the room as students filed in, piled pizza on their plates, and took their seats. No sooner than performance painter Mike Debus had set up his canvases, colors began flying, images became clear, and the “oohs” and “ahhs” of an impressed crowd filled the room.

Espresso Your Faith week is a week of joy, faith, and recognition of BC’s religious plurality—in the words of the organization itself, “This week-long celebration [brings] together the Boston College campus to #espressoyourfaith.”

The week is stacked from beginning to end with lectures, lunches, and thought-provoking programs that anyone can attend. From coffee splashes to lip sync battles, the week has been filled with fun. Debus’s visit on Monday to paint, particularly, was the week’s performance to remember.

Debus hails from Overland Park, Kan. After graduating from college with a degree in fine arts, he spent a number of years in the business world, but ultimately found it unsatisfying. He then devoted his life to creating works of art and “[pursuing] his dream of becoming a full-time freelance artist.”

At this Monday’s event, Debus let his audience in on the finer details of his life story.

“I’ve been blessed with the opportunity to travel a little bit with performance painting,” he said. “A question I get a lot is ‘when did you first realize that you were an artist?’ And I have memories that go back as far as when I was 5 or 6 years old, just a little kid, of drawing and creating. I think a lot of kids are that same way. We all love to tap into that creative side, especially when we’re kids.”

Debus told the story of his parents throwing playdates in his backyard, giving every kid crayons and paper and letting them create to their heart’s content. According to Debus, this was when he fell in love with creation. Over time, he focused himself and learned his artistry throughout high school and college.

“That desire was always there,” he said.

It’s easy to see how that desire has grown into a burning passion. His performance painting seems to follow a formula—he blasts his music (U2’s “Where The Streets Have No Name,” in Monday’s case), readies his paints, and begins spinning a canvas attached to a rotating stand. As the canvas spins, he liberally applies paint to all sides, leaving the audience wondering what his subject matter will be. Out of nowhere, Mike will place his hand on the spinning canvas, stopping it from spinning and revealing to the audience precisely what he is painting. Debus specializes in religious figures as well as baseball players. Monday, he proved this by producing two pieces: the first of St. Ignatius cloaked in red, and the second of Mother Teresa in her white and blue garb. Once the reveal was made, the audience was visibly impressed.

Between his paintings, Debus challenged his audience to reflect inwardly. Debus went on to talk about how he fought this calling at first—seeking jobs in the world of business administration—but that he could never deny the passion that burned inside of him.

“What are gifts that God has given you?” he asked.

Debus said God has blessed each and every person with a divinely inspired skill or talent, one that all people should utilize to their fullest ability. He closed his performance with a final thought: do everything that you can while you’re alive, because, “there’s never gonna be another you or me.”