Home » OFF THE WALL Uncovers an Energetic Boston Graffiti Scene 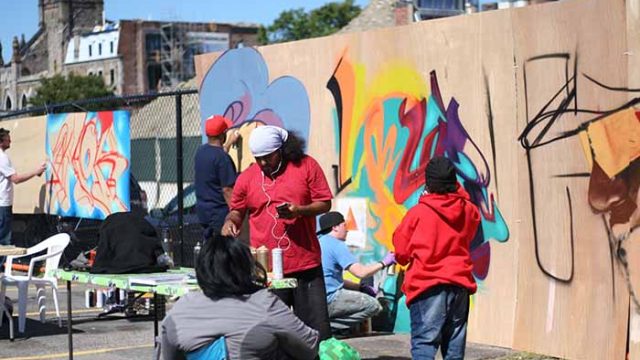 OFF THE WALL Uncovers an Energetic Boston Graffiti Scene

Art does not exist within the confines of grand museum walls alone, and this past weekend, visitors to the South End Open Market had the chance to see art come to life in one of its more natural habitats: the street.But the art that visitors discovered on Sunday was not that of traditional landscapes and portraiture neatly confined to a canvas—it was the vivacious work of 13 local and international graffiti artists coming together for the South End Open Market’s first OFF THE WALL event.

OFF THE WALL, which began around 11 a.m., took place in the large outdoor space of 375 Harrison Ave. that houses the market each weekend. The 13 graffiti artists, featuring renowned names such as Problak, Gofive, and Brianlife, immediately attached large plywood boards to the fence that surrounded the market, creating the surfaces for what would soon be a graffiti art gallery.

After the initial setup, the artists commenced their work, creating bold and vivid images as Saucy Lady Music DJed from a nearby tent and filled the space with infectious energy. In almost no time, a mass of people of all ages had crowded around the artists, fascinated by the chance to watch this graffiti art appear before their very eyes.

From early on, the event was a clear success, which was exactly what OFF THE WALL co-founders Brand Rockwell and Chris Masci had hoped for when he began planning the event a little over a month ago. After opening the South End Open Market as a local artisan and food market in 2003, Masci and Rockwell recently took note of the general increase of art markets around the city. They began searching for something that would not only set the South End Open Market apart from the crowd, but also give exposure to Boston’s graffiti art and hip-hop culture, media that Masci views as two of the most untapped artistic resources within the city.

After speaking with some of the market’s regular vendors, Masci got in touch with the local graffiti artist Brandalizm, who organized a group of artists to come participate in the live event.Even though the planning for OFF THE WALL took place within the time frame of a month, the event came together smoothly. Masci noted that the biggest stress was ensuring that all of the artists would arrive on time—and for the most part, they did. This easy planning meant that both the artists and organizers alike were equally excited about the event.

Boston graffiti artist Rob Gibbs, who goes by the artist name Problak, first learned about OFF THE WALL after Brandalizm reached out to gauge his interest. Gibbs was eager to take part, and given the small and tight-knit nature of the Boston graffiti scene, the news of OFF THE WALL quickly spread.Although its community remains relatively small, Gibbs emphasized that the graffiti culture in Boston is thriving. But, it remains a more underground form of public art within Boston proper.

“Most of the time it takes [a graffiti artist] from out of town for people in town to open their eyes and say ‘Oh, I didn’t know this stuff was so cool,’” lamented Gibbs. “And now that the South End has these different pockets  celebrating art, it’s good to see the city catching up, because I go to other places [like Philly, DC, New Orleans, Miami] and it’s live … [That vibrancy is] here, it’s just on a small scale.”

Gibbs maintains a positive attitude about the future of the graffiti scene within Boston, but notes that it certainly is an uphill battle. Many buildings that the artists are given as blank canvases are usually quickly knocked down and redeveloped, completely decimating their art.

“It’s interesting what’s happening here, I think it’s like the one foot in, one foot out thing,” Gibbs said. “The city’s just trying out something, beginning real experiments with it, but you know it will come to … it’s not an overnight process, I know it’s going to take a little while, but [I feel] all positive. If I wasn’t positive I think, I’d move. We go a point to prove right now, and this medium is the unspoken heard.”

And although the artwork created by Problak and the other artists will be taken down after two weeks, by this time next year, the public’s appreciation for the graffiti world may be stronger. Following this weekend success, Masci hopes to have a second annual OFF THE WALL event underway next year, and dreams of getting a developer to donate an even bigger canvas for these artists—a canvas that takes the form of a building.

South End Open Market
EchoME, Founded by BC Grads, Recognized At HUBweek Event
From Courts to Fields: Inside the Legal Battles Facing the NCAA