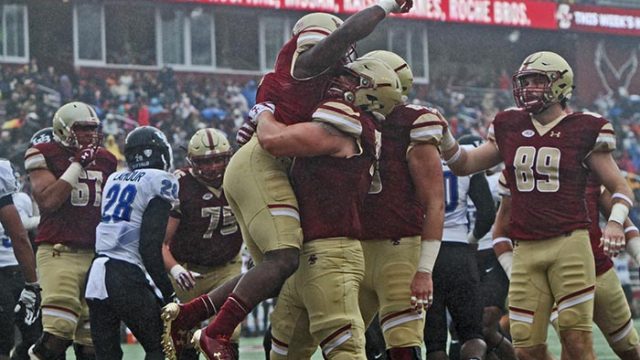 This week’s game plan was clear. The University of Buffalo came in with the second-best passing defense in the nation and the second-worst rushing defense. Steve Addazio loves to run the ball at Boston College. Surely, a match made in heaven for a BC offense that has muddled along through four games.

A bruising performance for BC’s defense is no surprise. Attacking through the air with a mix of first-down passes and long throws? Unheard of.

Let’s be real. When has anything ever turned out for the Eagles in typical fashion?

In total, BC gained 400 yards exactly while controlling the ball for 43 minutes. But on the ground, the Eagles looked “herky jerky,” as Addazio said after the game. So the Eagles took to the air and it paid off, big time. Quarterback Patrick Towles completed 14-of-25 passes for 234 yards and two touchdowns spread across seven different receivers. It’s the most passing yards in a game for a BC quarterback since John Fadule had 253 against North Carolina State last year.

That aerial effort helped BC to a 35-3 rout in a rainy Alumni Stadium on Parents’ Weekend. The victory gives the team a cushion heading into a five-game ACC stretch that includes three ranked teams: Clemson, Louisville, and Florida State.

“We’re getting there,” Addazio said. “We’re going to face a buzzsaw this week, so we’re going to have to play at our top level.”

It didn’t start out so easily for BC. Like they have all throughout this season, the Eagles (3-2, 0-2 Atlantic Coast) started off slowly in the first quarter. Missed passes by Towles, drops by Jeff Smith, and negative yardage by Jonathan Hilliman plagued the team. After two punts, Matt Milano gave the Eagles a prime chance to change that sluggishness. For the third time in his career, Milano burst through the line to block a punt. That gave the Eagles a first down at the 41-yard line of Buffalo (2-2). But again, Hilliman faltered on three consecutive runs to the left. Smith then dropped a fourth-down pass, as the boo birds flew out from the 24,203 reportedly in attendance.

Then Addazio made the switch to Davon Jones.

Jones gained 11 yards on his first two carries. With maroon and gold in his sights, Jones grabbed another three, before spinning and winning onto the A in Eagles painted on the south end zone. In total, Jones gained 53 yards—all of them for positive yardage—on 14 carries. And for the first time in 2016, the Eagles had the first lead of the game.

“We’ve been slow starting a lot,” Addazio said. “It seems like with our young guys it takes a while to get into a groove.

Towles brought BC into the red zone on that drive with a long pass to Chris Garrison. The 44-yarder was slightly behind the redshirt sophomore. While reaching back for the completion, Garrison’s leg got tied up in the defender. Once he hit the ground, he immediately called for medical assistance. The diagnosis came shortly after: a fractured tibia, likely a season-ender for Garrison.

“Chris has become a really integral part of what we do here, so all we can do is say a prayer and hope for the best here, right?” Addazio said.

Seeing the success of that first scoring drive, Towles and Co. got to work in a way the Eagles rarely have. BC has traditionally relied on first-down runs—this year, Addazio had called a run to open a set of downs a whopping 76.1 percent of the time entering the game. So naturally, BC became a little unpredictable. Towles found Smith and Tommy Sweeney on a couple of long first downs, while scrambling for another. Once in the end zone, Towles again eyed one through the air. On a slowly developing play, Towles aired out a pass to Charlie Callinan, who dove in the back of the end zone for the score.

Towles connects with Callinan for a touchdown. BC leads 14-0 with 9:25 remaining in the second quarter. pic.twitter.com/T2wE3cwuI5

Toward the end of the second quarter, Towles came at Buffalo again through the air. This time, he did it with a little help from his running backs. On 3rd-and-18 from BC’s own 8-yard line, Towles quickly dumped a pass off to Tyler Rouse. The senior, who has become a whiz at returning punts, made several tacklers miss en route to a 27-yard gain. Soon after, Towles curled out of the pocket to the left, planting his feet to find Jones without a man on him. Towles threw across his body to hit Jones for a 38-yard catch, setting up BC inside the red zone.

Towles capped the drive off by unleashing the fearlessness he has always claimed to have. With the pocket quickly collapsing and time soon to expire in the second quarter, Towles lofted a ball into the back of the end zone. His pass should have gone higher in the back of the end zone, Towles admitted after the game. But it barely stayed afloat over the gloves of Buffalo’s Jarrett Franklin into the hands of a diving Michael Walker. Even Towles himself was surprised by the outcome.

“As soon as I threw it, I didn’t know if it was going to get over the top of his fingers,” Towles said. “I’m obviously extremely thankful that it did.”

Juuuuuust enough air on this to lift it past Buffalo defenders and into the waiting hands of Michael Walker. At halftime, BC leads 21-3. pic.twitter.com/aOqZJvZO5l

Of course, as it usually does, BC’s defense deserves the bulk of the credit. As a unit, the Eagles allowed only 67 yards—third-fewest in BC history—and five total first downs. They held Buffalo’s dynamic dual-threat quarterback, Tyree Jackson, to a mere 9-of-21 passing for 42 yards and a net -2 on the ground. The individual performances are as praiseworthy. Kamrin Moore and Isaac Yiadom showed why they received praise as up-and-comers last season. The two shut down the Bulls’ young wide receiving corps, with a couple of notable breakups on third down and in the end zone. Ray Smith, whose position spot at defensive tackle was up in the air to enter the season, played exceptionally well with a couple of bruising tackles for loss. Harold Landry added a booming nine-yard sack. And naturally, Milano and Connor Strachan were all over the field, recovering fumbles and blocking passes.

“We just had to play fast and play physical,” safety and team captain John Johnson said of the negative plays BC forced. “We had a great week of practice, and we saw most of the plays they ran at practice, so we were on top of them.”

BC’s most important defensive sequence came after one of Towles’ two fumbles. The Eagles had a 14-0 lead midway through the second quarter, but a missed block allowed a defender to come right at Towles to knock the ball out. To the dismay of the parents in attendance, the Bulls had 1st-and-10 deep within Eagle territory. The defense, however, held tight again, forcing three incompletions (and aided by a big drop by Mason Schreck) to force the field goal. It was the kind of defensive stand that can prevent momentum shifts, and will lift any team—especially one built like BC—to victory every week.

But the Eagles’ success begins and ends with the play of the quarterback. Despite the statistics, it still appears like a work in progress. At his worst, Towles wildly missed open receivers, scrambled when he didn’t need to, and struggled to hold onto the ball.

Yet, at his best, Towles flashed the potential Kentucky fans always dreamt he could have. He combined sharp play-action passes on first down, deep throws, and quick feet to gain over 250 yards on his own. If those mistakes can be eliminated, BC might just have a chance at salvaging its season, which looked sunk only two weeks ago against Virginia Tech.

And the Eagles will have to. Because starting this Friday, the work really begins.