Home » Davon Jones Highlights BC Offense in Victory Over Buffalo 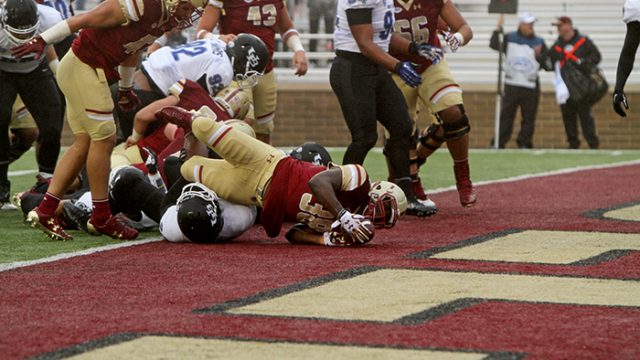 Davon Jones Highlights BC Offense in Victory Over Buffalo

Parents weren’t the only people who swept into Boston College this weekend. Along with all of the families visiting for the weekend, the University at Buffalo paid a Saturday visit to Chestnut Hill, seeking to upset BC football on its home turf.

It was a doomed quest, as the Bulls fell to the Eagles, 35-3. Buffalo (1-3) simply could not generate any offense against BC (3-2, 0-2 Atlantic Coast), which racked up 400 yards of total offense en route to the blowout victory. It was a confident team victory for the Eagles and a good sign heading into Friday night’s matchup against Clemson.

Last week, running back Davon Jones made a name for himself against FCS opponent Wagner. This week was no different. Jones seemed to be involved in all of the big plays today. He gained 53 yards on 14 carries—and, significantly, he didn’t lose any yardage at all. Jonathan Hilliman, by contrast, gained 64 total yards on 19 carries, but accrued negative yardage on four plays, losing 10 total yards throughout the game. This brought his net yardage to 54. Hilliman averaged 2.8 yards per carry, while Jones averaged 3.8 yards per carry as he dodged Buffalo defenders to make big plays for the Eagles.

Jones also scored his first collegiate touchdown today. In the final minute of the first quarter, quarterback Patrick Towles tossed the ball back to him, and he dashed forward, spun around a Buffalo defender, and dove into the end zone for the score. His touchdown opened up scoring on the day, giving the Eagles a 7-0 lead heading into the second quarter.

Davon Jones' first career touchdown is a good one, everybody. BC leads 7-0 at the end of the first quarter. pic.twitter.com/BDgA7zYcNe

Jones was involved in another crucial drive in the closing minutes of the second quarter. On fourth down, he was given the ball and managed to dive for a first down, extending the drive. A few plays later, Towles rolled to his right and saw Jones open on the opposite sideline. His lofted pass to Jones was on the money, and Jones managed to pick up a few more yards before being pushed out of bounds at the Buffalo 15-yard line. The play was good for 38 yards, and set up a touchdown pass to Michael Walker just a few snaps later.

Last week, Addazio praised the redshirt freshman for his grit and determination.

“It’s really hard to stop Jones for less than four yards,” he said following BC’s victory over Wagner. The same held true today. Buffalo struggled to bring Jones down all game, and on more than one occasion he juked defenders out by spinning around them before continuing to gain more yards.

Jones has emerged, seemingly out of nowhere, as a potent threat for this team. He doesn’t go down easily. He only has a few college games under his belt, but he looks like a more mature, experienced player on the field. Jones has used his spin to juke out defenders for the past two weeks, allowing him to gain even more yardage after he’s seemingly run into opposing defenses.

After the game, he said that he has confidence in any of the running backs to make an impact, but also that the decision is ultimately up to the coaches.

Over the past two games, Jones has proved that he is a dangerous offensive weapon for the Eagles, and arguably one of the best members of the offense. Don’t be surprised if he becomes a major part of this BC offense moving forward.

Midway through the first quarter, the BC defense had stifled Buffalo yet again. The Bulls lined up to punt. The ball was snapped back to the punter, who went through his motions and began to punt the football downfield. The ball never made it.

The offensive line struggled to hold BC back from the punter. Linebacker Matt Milano and defensive back John Johnson exploded past the offensive line and lunged toward the punter. Milano dove as the ball left the punter’s foot, hands outstretched. He solidly blocked the punt—the ball spun in the air before shooting out of bounds.

Matt Milano with the blocked punt of his career, giving BC excellent field position… pic.twitter.com/9A510z8jSZ

When the Eagles took over on offense, they had great field position at the Buffalo 41-yard line. The next three play calls were runs for Hilliman, resulting in no significant gain. On fourth down, Jeff Smith wasn’t able to hold onto a shaky pass from Towles, resulting in a turnover on downs.

The defense gifted the offense with great field position, but BC didn’t even get a field goal out of it. Against Buffalo, this squandered opportunity didn’t matter—BC won handily. But in the future, against tougher opponents like Clemson, this kind of mistake will be killer for the Eagles. When BC has good field position, it absolutely has to take advantage of it. A touchdown is, of course, preferable, but even a field goal helps. Turning the ball over on downs is unacceptable in this situation.

BC started three drives in Buffalo territory, but only scored on one of those drives (and it was during garbage time). The other two drives resulted in the turnover on downs and a punt from Mike Knoll, respectively. The Eagles have to find the end zone when they get opportunities like these.

Addazio remains frustrated with special teams mistakes’ taking away great field position for the Eagles, too. In the second half, Tyler Rouse had an electric punt return (including a leap over a Buffalo player) that would have given BC good field position to drive and extend its lead. The return was waved off because of a block in the back.

On the other side of the ball, the defense made some big plays to prevent Buffalo from taking advantage of great field position. In the second quarter, Towles lost control of the ball on a sack, and Buffalo recovered. The Bulls had possession of the football on the BC 11 yard line, giving them a great opportunity to punch the ball into the endzone.

The defense dug its heels in and refused to allow Buffalo to find the back of the end zone. A couple of big defensive stops paired with a dropped ball from Buffalo’s Mason Schreck brought up fourth down. The Bulls made the field goal attempt, but it was still a great defensive stand by the Eagles. Limiting Buffalo to three points, given its field position, was impressive for BC.