Home » After ‘Silence is Violence’ March, BC Must Make a Choice 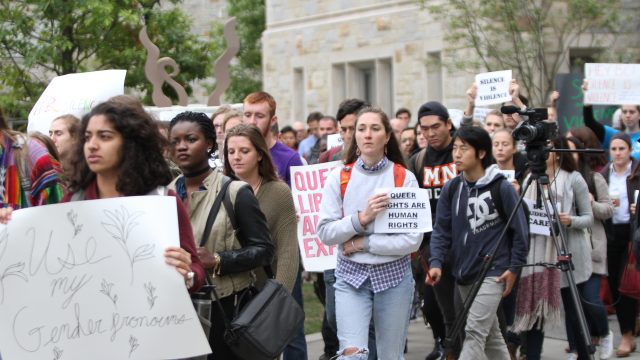 After ‘Silence is Violence’ March, BC Must Make a Choice

The “Silence is Violence” march this past Thursday came 12 days after a parking sign in the Mod Lot was defaced with a homophobic slur. Before this march, the act of vandalism prompted the passing of an Undergraduate Government of Boston College (UGBC) resolution, as well as two other editorials in The Heights. The only administrative response prior to the march was a letter to the editor from Dean of Students Thomas Mogan, in which he assured students that “Boston College does not tolerate acts of intolerance and hate toward any individuals or groups of individuals in our campus community.” The march, which was registered with the University, centered around the idea of University silence in the face of this vandalism, as well as its silence in response to other issues involving disability access, race, and LGBTQ rights.

Over 200 people attended the well-organized, effective protest. The route encouraged maximum exposure while also emphasizing a lack of accessibility on campus by walking down Commonwealth Ave.—this is one of the only routes from Main Campus to Lower Campus that doesn’t have stairs. One important aspect of the protest was participation by administrators and faculty members, including Mogan and Vice President of Student Affairs Barbara Jones. In a previous editorial, The Heights called for sympathetic members of these groups to speak out about these issues on campus. While appearing at an event demonstrates a response to student concern and provides administrative support, it stops short of giving a campus-wide response that would address students beyond those who attended the march and read The Heights letter to the editor.

There could be a perception among top-level University officials that more conservative donors might view the creation of an LGBTQ resource center as an abandonment of Catholic values and might withdraw support from the University if one were to be created. Georgetown, also a Jesuit university, received significant criticism after it created an LGBTQ resource center in 2008, which could easily worry BC’s administration. When the University appears to be more progressive on social issues, it is called out by Catholic publications, like when Crisis Magazine painted the University in a negative light for what the publication saw as collusion with Planned Parenthood. But dozens of alumni, mostly recent graduates, have come out to publicly say that they will not donate to the University until an LGBTQ resource center is created. These alumni and student leaders have described a history of tension between the LGBTQ population and University administration and have expressed their wants in a number of letters to the editor sent to The Heights. By favoring the potential financial loss from donors over a certain financial loss from young alumni, the University is making clear where its loyalties lie.

Balancing these pressures, the administration has a moral imperative to condemn these hateful actions and not allow the issue to fester. As a Jesuit school, BC is built upon its Jesuit values, which draw many students here. LGBTQ students have expressed the importance of a resource center as well as a response to the sign vandalization, and these same Jesuit values dictate the importance of caring for the well-being of these students. Pope Francis, a Jesuit, has emphasized the importance of welcoming LGBTQ people into the Church community, and has advocated apologizing for past offenses. As Martin Casiano, former vice president of diversity and inclusion for UGBC and BC ’15, said in 2015, “If we’re going to continue to talk about ‘cura personalis,’ we can’t continue to ignore that sexuality and gender are part of that whole person. It is rooted in our Jesuit values.”

Further, a 1997 pastoral message from the United States Conference of Catholic Bishops titled “Always Our Children” counsels parents on accepting their homosexual child. It reads, in part, “Nothing in the Bible or in Catholic teaching can be used to justify prejudicial or discriminatory attitudes and behaviors” and “Our message speaks of accepting yourself, your beliefs and values, your questions, and all you may be struggling with at this moment; accepting and loving your child as a gift of God; and accepting the full truth of God’s revelation about the dignity of the human person and the meaning of human sexuality. Within the Catholic moral vision there is no contradiction among these levels of acceptance, for truth and love are not opposed.” Responding to the concerns of LGBTQ students does not contradict Catholic values, but in fact supports them. The administration has, of course, not been outwardly discriminatory toward members of the LGBTQ community, and recent efforts by Mogan point to a more communicative future. And yet, when so many students are troubled by the silence of the administration, it seems as though the University is contradicting its Jesuit roots by not addressing inherent problems on campus.

The University has multiple potential courses of action.

One possible administrative response to the sign and resulting march is to refrain from any sort of public action. At this time, there hasn’t been an email or campus-wide communication to assure students that BC condemns such actions and stands behind LGBTQ students. This is not a good option for the administration. A lack of this sort of mass, public response only allows resentment to grow among students, who have already demonstrated their frustration in a number of ways. University Spokesman Jack Dunn told The Boston Globe in an email that BC is “a welcoming community that embraces all of its students.” He also said that BC will work with students to address concerns. While this is a response to inquiry, it is very generalized and vague. It does not tell students much about actual support of the LGBTQ community on campus. In the same article, Jones told the Globe that there was “a lot more to discuss.” This is true and is something that should happen in the future. There hasn’t been any further public discussion since the march on Thursday, and the administration must act to further the discussion.

While a presence at the march by some administrators was a way to show engagement with these issues, it still holds back from a public response that would involve students who were not a part of the protest or any of the activism on campus. A second option for administrative response would be a mass email or another form of campus-wide communication to address the fact that there was hate speech against the LGBTQ community on campus, and a statement of support for all affected students. In 2013, when the Lambda office, BC Law’s LGBTQ coalition, was vandalized with profane graffiti, a letter was sent to the BC Law community by the Dean of the Law School Vincent Rougeau, in addition to an email to all Newton Campus residents from then-Dean of Students Paul Chebator and Office of Residential Life Director George Arey. A public statement like the one The Heights is calling for is not without precedent.

If the University does choose to address recent events in a campus-wide email, students would likely increase calls for an LGBTQ resource center. In that case, the administration would have to be prepared to answer these calls and engage students in a conversation over the plans for the center, whatever they may be. Transparency would relieve some of the obvious tension over a perceived silence from the administration. The main options for responding would be forthrightly saying that a center will not be created, that one will be created, or that there is potential for one in the future. This would open the door to further debate and open dialogue on the issue and how students can attempt to advocate for the center.

Each year, the education of undergraduate students is worth over $597 million dollars, including tuition fees and financial aid. BC is, or should be, a center for education, and one cornerstone of education is communication. The University, however, has continually denied the chance for transparent communication between the administration and students who feel as though their needs are not met. When students have concerns about campus culture or their education, those concerns ought to be prioritized, especially when considering how much their education is worth. To show that education of students is prioritized by the University, officials must publicly condemn the act of hate speech and pledge to work with students on concerns. There are several paths that could be taken, but only one of those paths proves to the students that BC is committed to its role as a Jesuit center for learning.