Home » Conservative or Liberal? You Can’t be Both 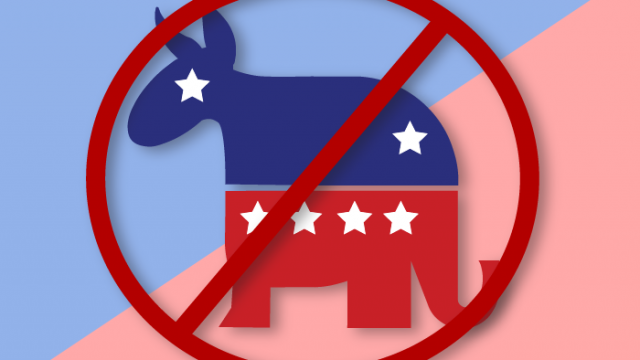 Conservative or Liberal? You Can’t be Both

Snoop around any American university for long enough, and you are guaranteed to hear the observation, “I’d say I’m socially liberal and fiscally conservative.” There it is—the political rallying cry of a generation, a tepid stab at engaging and defining one’s political views, a timeworn evasive maneuver. At Boston College, an institution with many students of affluent backgrounds and a culture of social justice, this mold is especially common. And barring further review, it is an entirely plausible proposition.

Let’s call this group the ‘compromise crowd,’ since it opts for an intersection between different strands of political thought. The compromise crowd is much more socially progressive than its predecessors, coming of age when divisive issues such as gay marriage have been legalized and relatively normalized in American culture. Thus, it makes sense that a progressive position on social issues comes naturally. The compromise crowd has also witnessed in its lifetime an unwieldy and inefficient government, prohibitive red-tape regulation, and a bloated bureaucracy. Therefore, its members naturally ascribe to the credo of fiscal conservatism: minimal taxation, small government, deregulation, and the infallibility of the market.

Pundits, parents, and professors occasionally chide the young for their political idealism. Look no further than the ‘social liberal-fiscal conservative’ amalgam as justification for this criticism leveled against us. That this coupling could exist harmoniously in theory is unlikely and in practice impossible. Indeed, the dissonance and mismatch of these incongruent ideals are jarring and cacophonous.

Fiscal and social issues are not mutually exclusive. They’re deeply interwoven. Economic policy-making does not exist in a vacuum—any given policy with an economic focus or intent will have spillover into the social sphere. Likewise, social policy-making requires cost considerations, thereby adding an economic element to virtually any new social policy.

A ‘social liberal, fiscal conservative’ position, whether intentional or unintentional, is the ultimate dodge of substantive policy discussion. With this simple response, one can ward off consideration of the real issues. For high-profile social matters such as gay marriage, it makes sense that a change in policy—a simple flip of the switch—could come without substantial costs or augmented government. But reality is never this simple.

America has a cycle of poverty, which is a social problem. To not consider it a social problem is to adopt the narrowest of definitions for ‘social problem.’ For those Americans in deepest financial despair, the prospects of socioeconomic mobility are stunningly bleak, and the specter of perpetual poverty looms large not only over them, but also their children. Disproportionately, these disadvantaged communities are people of color.

These are inarguably issues that merit a social liberal’s attention and action. The canon of fiscal conservatism, though, calls for tax cuts, smaller government, and budget slashes that would be of no help to these communities. The two beliefs are incompatible—one compels the compromise crowd to support the plight of the poor, while the other reduces and restrains the mechanisms that would achieve this goal.

Reducing income inequality and funding public schools and universities are two potentially effective policy mechanisms to mitigate the problem of poverty in America. These are social strategies to uplift disenfranchised populations. The corollary, of course, is that they come with a cost, in the form of more government spending and higher taxation. In many cases, the tension between the two strands of thought is zero-sum: advancing a socially progressive agenda undercuts a fiscally conservative one, whereas measures of fiscal conservatism worsen many of the country’s most pressing social problems.

Let’s not forget about the slew of issues that defy categorization by either of these parameters. From entitlement spending, to the plight of war-torn refugees, to foreign policy, there are hard decisions that the compromise crowd’s paradoxical ideology cannot address. So where does it stand on these issues that are difficult to categorize?

Take climate change, for example. The young are the primary stakeholders in the compromise crowd, so an intergenerational and global issue that will only get worse in our lifetimes should be a critical concern. Try to fit it within the socially liberal, fiscally conservative framework. Environmental stewardship can’t be narrowly construed as a social issue, but in a broader sense it is a social good. Thus, the compromise crowd would be inclined to favor action on climate change.

But, when viewed from an angle of economic prudence, the whole calculus turns upside down. On the merits of cost alone, the actions required to curb climate change make it enormously unenticing. Government intervention is required at every step—subsidize clean energy, regulate emissions, and tax fossil-fuel emissions. This is anathema to the doctrine of fiscal conservatism.

Imagine fiscal hawks salivating over a new piece of legislation that matches the New Deal in scale and scope. Equally entertaining is the thought of social progressives cheering on a reduction in the minimum wage or a wide-sweeping trend of deregulation. The goals of social liberalism—common welfare, health care, education, to name a few—and goals of fiscal conservatism—deregulation, low taxes, small government—cannot be wedded. So what is one to do?

Decide. In just over a month we will have the option to act on our convictions, and everybody would be better off knowing exactly where they stand. The compromise crowd should research the issues, define priorities, and come to a conclusion. Who and what one chooses is entirely his or her prerogative—Left or right, Libertarian or Green. As much as we cherish nonconformity, lament the two-party system, and love cherry-picking from the best of what all ideologies have to offer, we can’t peg our political orientation at a crossroads that doesn’t exist.

2 COMMENTS ON THIS POST To “Conservative or Liberal? You Can’t be Both”