Home » Putting Down the Pick, Yellowcard Exits With Grace in Final Album 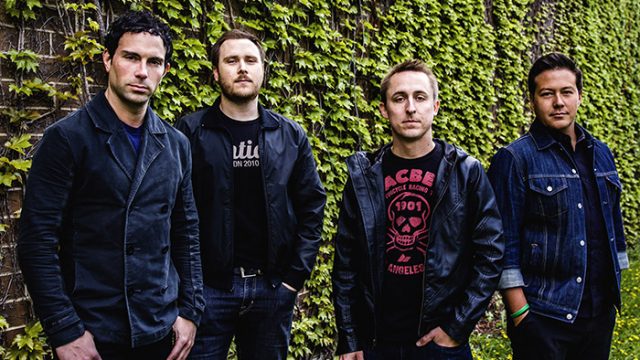 Putting Down the Pick, Yellowcard Exits With Grace in Final Album

In what seems like something of a self-articulated epitaph, Yellowcard’s 10th and final album opens with “Rest In Peace,” a goodbye song for the giant of the alternative rock industry. It’s a sad, “long-live-the-king” type of feeling to watch Yellowcard bid its fans farewell, but the band  has exited the stage with form and finesse, a huge accomplishment regardless of one’s time creating music.

Yellowcard, the band’s first self-titled album, may actually be one of the most impressive works  in its 19-year lifespan. “Rest In Peace” begins with a sobering stillness, incredibly uncharacteristic for the punk rock scene as a whole. For any other band, such a slow start may have come across as a misstep—Yellowcard, though, seems aware of its lingering moments in the limelight. As they sing “Rest In Peace,” these first lines stand out: “It was the best that you could be for me / I think we were lucky just to stay alive / Even when you had only fire to breathe / I know you were only trying to make it right.” Sure, on the surface, Ryan Key sings to a lost love, but it doesn’t take more than a casual listen-through to know that the band is thanking those who have remained devoted to its work for so long.

Even though the album may start with a soothing tone, Yellowcard is not afraid to channel the band’s classic “Lights-and-Sounds”-esque uptempo. Yellowcard hits audiences with “What Appears,” “Got Yours,” and “A Place We Set Afire,” each with its own unique touches of passion. It’s refreshing to find that listening to the band’s faster beats takes no effort whatsoever—earlier iterations of Yellowcard’s music suffered the most from a lack of polish. Anger and fire in songwriting are completely okay, as long as they have been tempered with maturity, and Yellowcard is the key example of the right way to do this.

Naturally, not every single element of Yellowcard is entirely up to par. The sound of the album may (thankfully) be diversified, but Yellowcard does suffer a bit in the department of pacing. Some songs carry on a bit longer than necessary, instrumentals holding out in a bit of grandiosity. In particular, “The Hurt Is Gone” drags on too long, somewhat messily transitioning into “Empty Street.” At times, it can be difficult to track which direction Yellowcard seems to be heading in. Still, these issues detract from the work in only the smallest of ways, and the band’s stronger aspects more than make up for its tiny weaknesses.

Yet another element of Yellowcard’s mastery is its willingness to diversify its own sound. Every upbeat song is separate but equal from every other song, an unusual trend for a band that has producing music as long as Yellowcard has. The album feels as though it is a labor of love rather than a straight cash grab, and that fact becomes clearest when listening to the final, most heart-wrenching song of Yellowcard: “Fields and Fences.”

As with many words of affirmation, the word “masterpiece” is thrown around all too often. That being said, as the last song of the band’s last album, “Fields and Fences” is an unbridled masterpiece. Ryan Key and Co. have produced a song with a precise blend of acoustics and uptempos, almost surgically pulling at the heartstrings of anyone who listens. As violins swell (strangely enough) and the band’s life comes to a close, it is a wholly emotional experience to see how Yellowcard has stepped down as one of the premier alt-rock bands in America. In the most beautiful of ways, the sound of Yellowcard has matured from that of a young, angry group of boys to that of first-rate performers and artists.

Fans of Yellowcard can release a deep breath held since the band announced its impending breakup. Yellowcard, though imperfect, is a remarkably solid swan song. For any fan of alt-rock, it really is a tragedy to watch the band depart from the music scene after becoming one of the most incredible performers and creators. Perhaps, though, even the most beautiful things must fade—if this really is the case, then Yellowcard has exited the building at just the right time.

ONE COMMENT ON THIS POST To “Putting Down the Pick, Yellowcard Exits With Grace in Final Album”