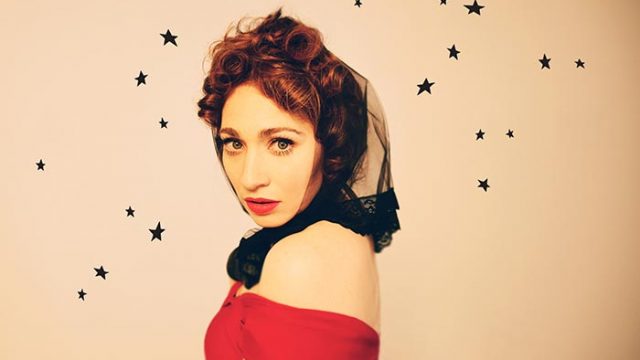 Between the recent release of the hit theme song “We’ve Got Time” for Netflix’s original series Orange is the New Black and her cover of George Harrison’s “As My Guitar Gently Weeps,” it was assumed that singer-songwriter Regina Spektor was preparing for her entrance into the mainstream. To the delight of her dedicated fan base, her newest album lives up to that assumption. On Remember Us to Life, Spektor remains true to her indie/folk roots while experimenting and evolving her interest in creating a more mature and refined sound.

The Russian-American artist released her first album, 11:11, in 2001, but her career didn’t truly take off until the release of her 2006 album Begin to Hope. With hit songs like “Fidelity” and “US” Spektor solidified herself as a talented, spontaneous, and somewhat offbeat artist.  Spektor is known for her storytelling ability and unique approach to songwriting and production. Remember Us to Life is the follow-up album to 2012’s What We Saw From the Cheap Seats, and is Spektor’s saddest album to date. In contrast to her earlier work, this album views the world through a more somber and straightforward lens.

Remember Us to Life is successful in both of these regards. This album, as compared to Spektor’s earlier works, seems less introspective and more worldly and holistic in its theme and content choice. On songs like “Small Bills” and “Grand Hotel,” Spektor poses questions about consumerism, capitalism, and corporate greed. In typical Regina fashion, she answers them through the stories and thoughts of her well-developed characters.

Audiences love Spektor’s ability to captivate and tell a story using a variety of sounds, musical compositions, and keyboard arrangements. Remember Us to Life is no exception. The range of musical styles present on the album is stunning. The use of unconventional instrumentation and orchestration make Spektor a standout in the indie/folk genre. Listeners can expect a smooth, silky vocal delivery over an unconventional mix of keys, drums, and strings. Spektor’s voice is reminiscent of other indie artists like Suzanne Vega, Ingrid Michelson, and Fiona Apple. Her rhythmic compositions, on the other hand, set her apart. Spektor has a unique ability to flawlessly fuse her deeply moving and raw lyrics with a melody line. Remember Us to Life does not disappoint in this regard.

Audio production adds a complex layer of color and originality to the album. By taking a simple piano track and utilizing other instruments and digital special effects, she can build a soundscape around her vocals, which increases the dynamics of the song without raising or pushing her vocal range.

This album provides listeners with a strong dichotomy between the lighthearted, childlike vocal and instrumental delivery, and the deeply dark and brooding lyrics that lie beneath. There are a few songs on the album that feel slightly unnecessary and overworked. The lyrics on those resemble vague poetry and fail to express the powerful message that Spektor’s other work provides. “Obsolete” and “Tornadoland” are tracks that break the cohesive message of the album as a whole. They take attention from the real stars of the album, such as “Bleeding Heart” and “Grand Hotel.”

“Bleeding Heart” is the standout pre-released track off the album. The song uses an unconventional arrangement to tell a story of overcoming social anxieties and loneliness. The lyrics, which address the listener as the subject using the second person, overlay a seemingly joyous, bouncy tune and highlight the passage of time and the struggle of overcoming obstacles and achieving happiness. The creativity behind the track is representative of Spektor’s style. The song progresses through distinctive moments in the subject’s life, which are accompanied by corresponding instrumental variation. This four-minute song provides the listener with four distinct tracks merged together.

Still not conventionally mainstream in the slightest, Remember Us to Life is a big career shift for Regina Spektor. It will serve great importance to her devoted followers and fans, who have been charting her growth as an artist and a storyteller.

regina spektor remember us to life
This Espresso Your Faith Week, Dorian Murray’s Story Lives On
Finding Change Between Beats