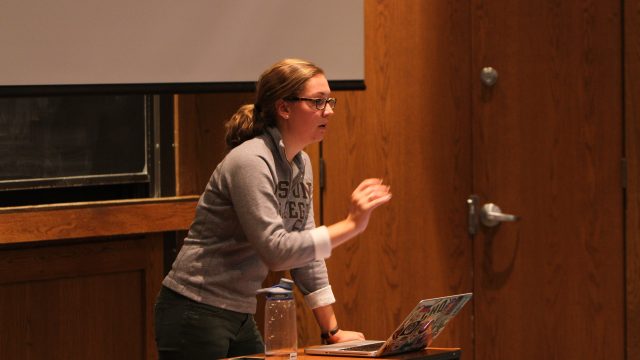 The presentation was the first of UGBC’s quarterly meetings with the Board of Trustees. McCaffrey explained that this year’s meetings are of utmost importance because it is a strategic planning year, during which the University is creating a plan that will affect BC for the next 10 years.

Simons and McCaffrey discussed what UGBC has accomplished thus far this year, including the addition of printers in Corcoran Commons, its work on implementing mental health resources, and the addition of a conduct report request on the Agora Portal.

They also discussed goals that they hope to accomplish throughout the year like work on financial aid, increasing educational resources on campus, and fully implementing a freshman mentorship program for women that will be run out of the Office of Student Formation.

“One of our main goals going into the presentation, as student representatives, was to present a professional face for the Board of Trustees, and show that a lot of the issues that they talk about, students do have an opinion on,” Simons said.

Simons and McCaffrey also brought up the issue of LGBTQ inclusivity on campus, which has been a major discussion point on campus so far this year. They referenced the march that took place Thursday, where several student groups, including the AHANA Leadership Council, the GLTBQ Leadership Council, and the Council of Students with Disabilities, came together to break the silence that many believe surrounds these issues on campus.

“We certainly hope that conversations will continue in a positive way.”

They also referred to the multiple letters to the editor published in The Heights surrounding issues of inclusivity. Simons pointed out how these letters have come from several groups that feel passionately about these issues, including alumni, the Women’s Center, and Dean of Students Thomas Mogan.

Simons and McCaffrey also presented UGBC’s ideas for the Strategic Plan, which focused around the creation of a student center on campus. They posed four problems that the University is facing right now: a lack of communal student space, a lack of facilities for student organizations to hold their meetings, limited visibility for current student resources and events on campus, and limited social opportunities for students who do not drink.

A student center, Simons and McCaffrey said, would provide students with a common place to meet and work on assignments, a space for weekend programming, and a communal place for student organizations to advertise their events and initiatives. The creation of a student center, where organizations and resources are located together, would increase visibility and encourage students to become involved, McCaffrey said.

Simons described how on college tours, student centers are often points that potential students are brought to. They are often a reflection of student culture and something that BC is lacking, he said.

A Heights article from 1986 said that a student center was in its planning stages, with completion aiming for 1990. The article references several of the same reasons for the center that were discussed at the meeting.

Simons and McCaffrey also brought up the potential inclusion of a LGBTQ resource center within the Student Center. UGBC passed a resolution on Sept. 26 to call upon the University to create a center for LGBTQ students.

UGBC has held several forums to discuss ideas for the presentation, including its annual retreat in August. Simons and McCaffrey also took ideas from last spring’s “BC Looking Forward” event, where students were able to speak with BC administrators who are working on the University’s Strategic Plan.

“We certainly hope that conversations will continue in a positive way about the idea of a Student Center,” Simons said. “And that ultimately, this will be something that is prioritized at the University.”