Home » Campaigns & Cartoons Exhibit Proves the Times Have Changed, But Not Political Animosity 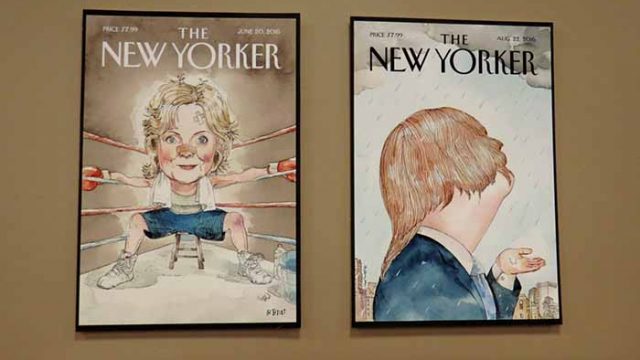 Campaigns & Cartoons Exhibit Proves the Times Have Changed, But Not Political Animosity

Boston College’s O’Neill Library unveiled  an exhibit entitled Campaigns & Cartoons: Depictions of U.S. Presidential Candidates from 1828 to 2016 this past Wednesday, Oct. 5. The series of campaign cartoons and political satire pieces seeks to educate students on precisely what makes up political satire as a whole, and just how the genre has progressed (and perhaps regressed) over the past 200 years.

“These works promote debate by questioning a candidate’s character, skill, and judgment,” the introduction to the exhibit said. “Often, these cartoons provoke an emotional response in the viewer, whether it be shock, laughter, or disgust.”

When walking up to the exhibit itself, it becomes clear just how true this statement is. The exhibit is set up in a chronological order, with the oldest of political cartoons on the left, and the newest on the right. Above the series of display cases is a classic image of Theodore Roosevelt pouring his beaker of “progressivism” and “pure democracy” into the mixing bowl that is a “Teddy speech.” Alongside this concoction sits other disjointed ingredients (“Radical spice,” “Conservative views”), all of which are plastered on top of an eye-catching American flag. The exhibit is rather hard to miss.

Naturally, no exhibit on political cartoons would be complete without a tribute to Thomas Nast, the 19th-century father of the American cartoon. Centered within the first display case is a book detailing the history of his work, and surrounding it are examples of cartoons from the earliest stages of American history. It might actually be humorous if it was not so disheartening—while some cartoons are relatively inoffensive, most of the earliest American political satire is as biting and vicious as the 21st century’s attack ads. For instance, consider Nathaniel Currier’s “An Available Candidate” (1848), in which Zachary Taylor sits atop a throne of skulls, representative of his actions in the Mexican-American War. Less somber and more childish is John Childs’ “Ornithology” (1852), which depicts the presidential candidates as turkeys clucking over the Mason-Dixon line.

The most tiresome of realizations that Campaigns & Cartoons provides is one of chronological progression. American satire over time has changed a surprisingly small amount—there is no clearer evidence than the far end of the exhibit, which is devoted to political cartoons from 2000 onward. The keynote cartoons are two New Yorker pieces, one of Hillary Clinton in a boxing ring, and one of Donald Trump caught in a rainstorm. While neither is explicitly attacking each candidate (a smart decision for a library who would want to remain bipartisan), it is not difficult for any American to envision the plethora of cartoons, attack ads, and sensationalism that has been unleashed during the 2016 election cycle. These pieces serve as placeholders for the vile, blithering enmity that has plagued this year. Campaigns & Cartoons is, if nothing else, incredibly relevant for college students, many of whom are voting for the first time this year.

With O’Neill Library’s newest exhibit, it is hard to not be reminded of French journalist Jean-Baptiste Alphonse Karr when he famously stated, “The more things change, the more they stay the same.” Certainly, specific nuances of the American political climate have changed over time—t would be idiotic to deny this. But there is a sense of deja vu to Campaigns & Cartoons, too. History itself has progressed and changed, but the way human beings spew animosity and hate most certainly has not. This, perhaps, is the biggest takeaway from the exhibit—it is far, far easier to fall into a cycle of anger than it is a cycle of rational political discussion.

As viewers leave the exhibit, one more thing will stand out. Along the far edge of the exhibit is a printout of an XKCD webcomic, entitled “Electoral Precedent,” which reminds us that making election predictions based on previous results rarely works out by Election Day. Though this is only one more cartoon to be viewed and analyzed it also offers a kernel of hope as well. As an American voter, one must never be discouraged by the ill will and personal attacks that invariably hit the airwaves during every election. Even though hate may prevail in the moment, the culture of American democracy can always change for good.

The presentation is both free and open to the general public, and can be found in the third floor Reading Room of O’Neill Library. It will remain open until the end of December this year.