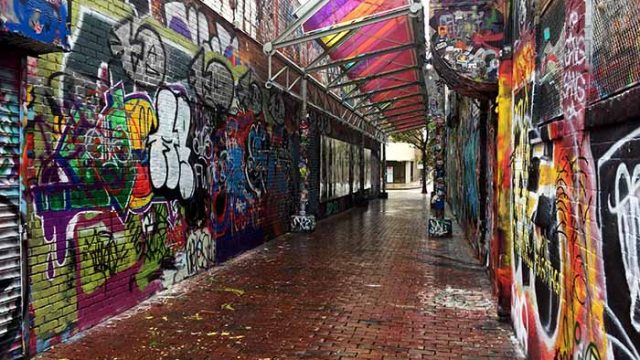 Sometimes, rainy days are just what tired eyes need. Their gray overcast makes getting through the day calm and uncomplicated—if a little sleepy as a side effect. But other times, these grey days come at exactly the wrong time, when your eyes are starved for color and excitement, and are desperately searching for something—anything—to keep them open.

If this happens, I suggest taking a trip down to Cambridge’s Central Square.

Just across the street from the Central Square T stop is a tiny alleyway sandwiched in between Central Kitchen and what is currently a vacant storefront. But this alleyway is not of the traditional dank and grimy variety that can be found in cities across the world. This alleyway is a work of art.

Identified only by two signs on short steel sign post—the first dubbing the alley Richard B. “Rico” Modica Way in bold black and white letters, and the second smaller sign proclaiming Graffiti Alley in smaller green and white letters—Modica Way might at first seem like a tiny blip in the carefully planned cityscape.

But on the left-hand wall, and spreading onto the space available around the mural on the right, is what draws you into the alley in the first place: an ever-changing riot of shapes and color that showcases the work of countless, anonymous Boston street artists.

This bright canvas is a constant work in progress and a giant collaboration all rolled into one, and the result is something otherworldly. The pictures and words layer over each other and showcase everything from carefully designed works of art, to more crudely drawn words that spell  out phrases like “wall art show this Sunday.”

And the alley’s magical feel does not end with the walls. It continues upwards with the length of brightly-colored plastic prisms that bridge the gap between the two buildings and create a stained-glass ceiling. On a sunny day, the panes cast brightly colored shadows on the already vivid walls, adding an ethereal quality to the already otherworldly space. On a rainy day, the puddles on the wet brick sidewalk will capture and reflect the colors in the pane, allowing someone passing through this colorful tunnel to feel as if he is walking through fragments of shattered colors.

As you walk through the alley, your eyes are hypnotized by the colors on the walls and at your feet, and they eagerly jump from one sight to the next. Each new discovery adds a layer of delight—who knew that random flyers and empty bags of chips could pack such an aesthetic punch and exude the perfect level of haphazard imperfection when carelessly taped to a utilitarian steel pole?

With your eyes so occupied, it is impossible to notice the speed with which you move through the corridor, and all too quickly, you find yourself standing in the middle of a parking lot. The ethereal cocoon of vibrant color and gleaming light has come to an abrupt end, and you cannot help but want to return to the happy reality where finding empty bags of greasy potato chips taped to a pole is something amusing, not something mildly revolting.

Unfortunately, you can only walk up and down a tiny alleyway so many times before it becomes a bit odd, and, in a bout of self-consciousness, you force yourself back onto the streets of Cambridge, where your eyes grow reacquainted with the monotony of the concrete sidewalks.

But even as you stare at the familiar surroundings, you cannot forget the odd beauty of Modica Way. You cannot help but see it reflected in the rest of the city around you, because even if the strange beauty isn’t neatly contained within an alley, it is still there.

Who knows, maybe that ratty poster taped to a pole isn’t such an eyesore after all.