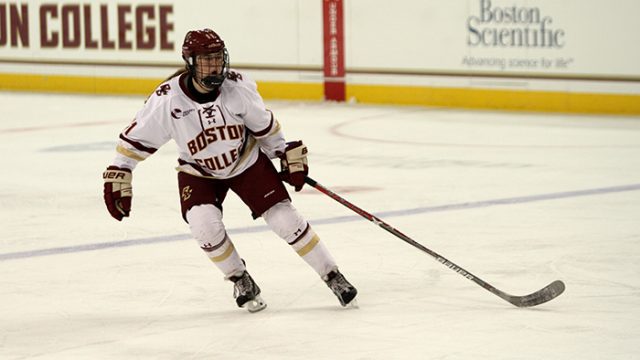 Time ticked away on a 5-on-3 for Boston College women’s hockey. The Eagles had generated little offensive momentum and desperately tried to push anything they could at the net. Alyson Matteau, however, had different plans. The Maine defenseman pushed a pass into open space on its side of the net, right as Kristin Gilmour and Brooke Stacey came out of the box. Megan Keller laid out to deflect Stacey’s pass, but Gilmour drove it home past Katie Burt. Suddenly, a team that had not come close to beating BC all last season had a tie—and the momentum—to open the second period.

Then came the new Alex Carpenter.

On the ensuing faceoff, Caitrin Lonergan dashed coast-to-coast after an initial feed by Keller. The heir apparent of the Eagles’ throne used her breakaway speed and long reach to push the puck past Carly Jackson. A mere 23 seconds later, all was calm yet again in Kelley Rink.

Though the team struggled at times offensively and faced an uncharacteristically strong Maine attack, the Eagles held out for a 2-1 victory over the Black Bears. The strong play of Maine—a team that finished 10-23-2 last season—merely represents a sign of the changing times in Hockey East.

“I think our league has a lot more parity in it this year,” Crowley said. “Obviously we have that target on our back, and I thought our team responded well.”

The Eagles (1-1-1, 1-0-0 Hockey East) got off to a hot start in the first period on the power play after Tereza Vanisova was called for a charging penalty for Maine (1-4-0, 0-1-0). With time running low on the man advantage, Kali Flanagan blasted a shot that appeared to go wide left of Jackson. But Kristyn Capizzano lunged out with her stick to the right to redirect the puck to the twine for her first goal of the season.

The first period also saw the return of Eagles’ captain Andie Anastos, who departed last Saturday’s game against Duluth with an upper-body injury after a big hit. Anastos has not practiced at all this week, making her gametime status questionable to the point that Crowley listed her on the fourth line. While she didn’t contribute on the scoresheet, Anastos had immense success in the defensive zone. She handily tracked Maine forwards, showing off her value as a two-way player for the Eagles. Anastos’ presence made a huge difference for BC’s bench and morale.

“It was an awesome surprise,” Keller said of Anastos’ return. “I didn’t know if she was going to play or not, and for her to be able to get out there in her senior season and obviously she’s someone we look up to, it was very important to our team.”

With Anastos on the mend, Crowley has used the time to experiment with a wealth of line combinations. One that worked today came from an all-freshman combination. Lonergan, alongside wings Delaney Belinskas and Bridget McCarthy, generated an immense amount of offensive pressure. The unit routinely attacked the net and combined for 12 shots (and, of course, the goal). Their success was a formula that Crowley believes will bring a lot of wins to her program this season, even if the players’ ages make it unconventional.

“A lot of time you don’t put three freshmen together, but toward the end of our last game in Duluth, I thought they play really well together and feed off each other together,” Crowley said.

On the whole, the Eagles showed that their offense, which relies heavily on new contributors, is a work in progress. BC only converted on 1-of-5 power plays, and struggled with handling pucks, according to Crowley. The 5-on-3—the one that led to the Maine goal—appears to be something that will go back to the drawing board throughout the week. Additionally, the Eagles failed to generate pressure late in the third, when Lonergan had to be taken out of the game with an injury. She received a hard hit from a Maine player and doubled over, holding onto her arm. As of game’s end, there is no update on Lonergan’s status.

Fortunately for the Eagles, their defensive corps appears as strong as ever. Keller often took on two players in the defensive zone, and used her impeccable reach to prevent shots. Grace Bizal also had a strong game behind the blue line in holding Maine to only 20 shots on goal.

And, of course, BC has Burt, one of the nation’s best goaltenders. Burt expertly manned the crease, using both glove and pad to keep the Black Bears out of the net. She even stopped a penalty shot by Maine’s Anna Wright, who drew the try off a Makenna Newkirk penalty. Overall, the play of the women behind the blue line helped the Eagles to their first win of the season. Getting that first W on the books after a record-setting season last year was a great first step, even if the game had a different feel from last year.

“That was a tough game,” Burt said. “I don’t think we had many of those last season, where we could say we were pretty gritty to get a win, so we’re feeling pretty good about that.”