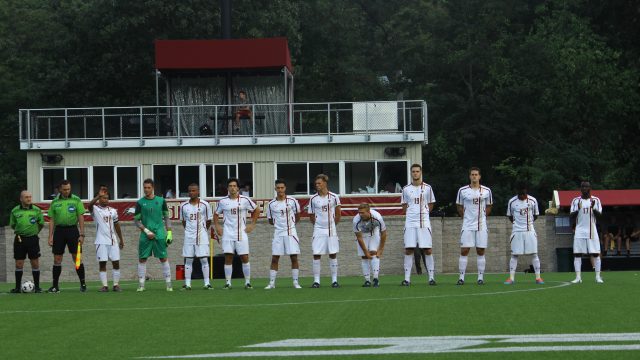 Sometimes—even in team sports—a single person can have a profound impact on the outcome of a game. For Boston College men’s soccer on Friday night, it looked like that person was going to be the opposing goalie. BC outshot Pittsburgh by 11 shots, but diving save after diving save by Pitt’s Mikal Outcalt made BC’s prospects of coming away with the win dim, to say the least.

That was until Maximilian Schulze-Geisthovel passed the ball to freshman Callum Johnson. With minutes left to spare, Johnson took what looked to be BC’s last opportunity, wound up, and placed a perfectly struck ball right into the back of the net. With his first goal as an Eagle, Johnson locked up the win in the 89th minute for BC to take the victory over Pitt, 1-0.

Despite the dramatic, last-minute ending, BC (6-3-1, 2-2-1 Atlantic Coast) looked to be in control for most of the match.

Beginning in the first period of play, BC immediately seized hold of the game. Within the first 15 minutes, BC had recorded two shots on Pitt (2-8-2, 0-4-1). One of the balls had sailed over the net, while the other—a shot by Isaac Normesinu—was skillfully blocked by Outcalt. The Eagles’ momentum was not halted by these two missed opportunities. Zeiko Lewis continued BC’s offensive attack as he recorded two back-to back shots after his first rebounded off Outcalt. Abe Bibas then got off a header that was blocked, giving the Eagles three shots in a 32-second period.

The Eagles got off four more shots in the first period while Pitt managed no shots on goal. BC’s offensive prowess would carry past halftime as Simon Enstrom managed a shot on goal 43 seconds into the second half. Pitt managed to muster a more organized offensive attack than in the previous period. The Panthers recorded their first shot in the 21st minute of the second half.

As the clock continued to tick, the game became more intense as each team looked for their moment to finally take the lead. Despite BC’s dominant play throughout the game, it became clear to both teams that this matchup was going to come down to the final seconds.

For a moment, it looked as if fate was on the side of the Panthers.

With just three minutes left in the game, Pittsburgh’s Luca Mellor had the match in his sights. As he wound up to take what he presumed would be the game-winning shot, both teams collectively held their breath.

The ball, however, was sent sailing over the top of the goalpost and BC was ready to take advantage of Pitt’s failure to capitalize. Via an assist from Schulze-Gesithovel, Johnson did just that, scoring in the second-to-last minute in regular to hand BC a win.

Despite the game-winning shot by Johnson, Lewis was truly the star of the game. He recorded three shots and showed himself to be the true senior leader that head coach Ed Kelly believes him to be.

BC has two games next week, against Harvard on Tuesday and Clemson on Friday. Harvard should prove to be a good warm-up for No. 5 Clemson. BC has struggled against top-tier opponents such as Duke and Syracuse so far this season, and can’t let this Friday be a repeat of that no-so-distant past. The Eagles need to go into the match calm and prepared to avoid making unnecessary mistakes against a team that will surely take advantage.