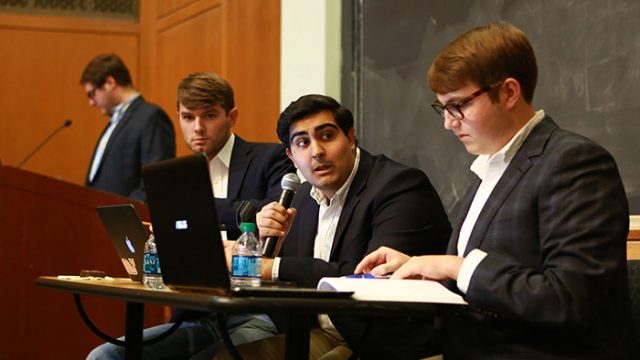 With One Month to Go, College Democrats and College Republicans Talk Upcoming Election

With just a month to go until Election Day, the Boston College Democrats and Boston College Republicans faced off in a debate Thursday night. The event was sponsored by the Eagle Political Society (EPS) and the Undergraduate Government of Boston College.

Three members of each party squared off in the debate, which was moderated by a member of the non-partisan EPS. The College Republicans were represented by their vice-president, Olivia Lanagan, MCAS ’18, Brendan Ferguson, MCAS ’20, and Eric Sporel, MCAS ’18. Opposing them was political director of the College Democrats, Matthew Terry, MCAS ’19, finance director Rohit Bachani, CSOM ’19, and Connor Coles, MCAS ’20.

The first topic up for debate was national security, with a particular focus on the question of allowing refugees and immigrants from other continents, as well as the acts of domestic terror that have occurred in recent years.

The Republicans began by pointing to the rising influence and power of China and Russia, the Iranian Nuclear Deal, and the growth of ISIS as largely the results of the Obama-Clinton foreign policy. They also took issue with some of their own candidate’s policies, however, especially Donald Trump’s proposal to ban Muslim immigration.

“We recognize that not all Donald Trump’s proposals on national security accurately represent the fundamental ideas of the United States,” Ferguson said.

Terry spoke first for the Democrats, stating his concerns with Trump becoming president.

“First off, I can’t imagine a world in which Donald Trump would provide any stability in the Middle East, and anywhere in general,” he said. “Frankly, he’s a loose cannon.”

The Democrats argued that Democratic presidential nominee Hillary Clinton’s experience in foreign policy makes her the most qualified candidate, and advocated partnering with Silicon Valley to prevent online terrorist recruitment at home while destroying ISIS’s network of funding and recruitment abroad.

“This is a time for choosing. It’s a time to gauge what kind of country we want to mold, and what kind of future we’ll build together.”

On the issue of gun control, both sides agreed on the need for more background checks and mental health reform to deal with gun-related suicides. They disagreed, however, on the Second Amendment’s role in modern America, with the Republicans taking the position that it is still necessary to defend against a tyrannical government. The Democrats argued that this form of government was unlikely to come about.

The next topic was climate change, where the groups again largely followed the parties’ positions.

“We are all in favor of trying to find ways to reduce climate change provided that they are driven by the market and not government regulation which simply just hurts business,” Sporel said.

This was met by sharp criticism from Coles, which drew a deal of applause.

“Now, there’s one thing that he skirts around on this issue, it’s that there’s a time frame to where global warming becomes irreversible,” he said. “If you want to talk about jobs being lost, I think that when Boston has been projected by many organizations to be underwater by 2075, you’re going to find a lot of people losing their jobs because the land is not gonna be there.”

Pointing to the large industrial economies of India and China, Sporel argued that any climate control actions would only be followed by the U.S. at a detriment to the economy.

The Democrats championed Clinton as a defender of LGBTQ rights and issues and asked when Republicans would finally address the issue. Ferguson replied on behalf of the Republicans.

Both sides condemned the recent incident in the Mod Lot, where a sign was defaced Sept. 17 with a homophobic slur.

In the closing remarks, the debate turned directly to Clinton and Trump.

“This is a time for choosing,” Bachani said. “It’s a time to gauge what kind of country we want to mold, and what kind of future we’ll build together.” 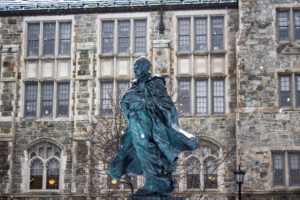