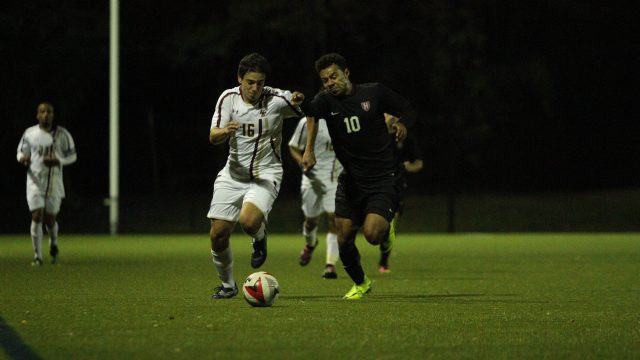 The Eagles (6-4-1) suffered their third consecutive loss to crosstown rival Harvard (6-3-2) after a couple unlucky bounces put BC in an early hole, and a dominant (yet frustrating) second half couldn’t produce a single goal. Despite outshooting the Crimson 10-1 over the final 45 minutes, the Eagles were stunted by goalkeeper Kyle Parks, who managed four crucial saves in the 2-0 victory.

The misfortune began in the fourth minute, when a long throw-in found Taner Dogan in the box, and the Harvard midfielder rifled a shot from close range directly at BC keeper Cedric Saladin. The Swiss sophomore blocked the attempt, but Dogan anticipated the rebound perfectly and, this time, finished past Saladin to give the Crimson a 1-0 advantage.

In the 21st minute, Harvard extended its lead to 2-0 off the boot of Tyler Savitsky. Once again, an unlucky bounce plagued the Eagle defense. A Crimson attacker tried to pass a through ball in between BC’s left and center backs, but Callum Johnson was right there for the interception. Except, in the blink of an eye, the ball took an awkward bounce off of Johnson, sputtered past Abe Bibas, and deflected straight to Savitsky, who let his momentum take him behind the Eagles’ back line. The Harvard substitute took a few touches before firing the second goal of the evening by Saladin’s left shoulder.

BC also fell victim to some unfavorable officiating. Toward the end of the first half, Zeiko Lewis snuck behind the Crimson defense and prepared to shoot a sure-thing goal from about 10 yards out. But a Harvard defender upended Lewis with a dangerous slide tackle from behind that caught little to no ball. The Eagles sideline waited for a whistle and a card as Parks fell on the loose ball and gazed at Lewis, writhing in pain, to his left. No call.

Nothing about BC’s first half was pretty. In fact, the deficit could have easily been three goals if it wasn’t for a Simon Enstrom save off of a corner kick header. But, in typical fashion, the Eagles followed up their slow start with a much-improved second half of soccer, roaring back to pummel the Crimson with shot after shot—only, somehow, nothing would go in.

In the 60th minute, BC nearly cut Harvard’s lead in half when Maximillian Schulze-Geisthovel bodied his defender, corralled a long throw-in from Trevor Davock, and turned to shoot. The scrum in the box produced only a series of deflections, though, as the Eagles couldn’t rattle off a clean shot past the keeper.

Soon after, Raphael Salama won a ball near the opponent’s 18-yard box and poked a pass in Enstrom’s direction. BC’s most powerful shooter hammered a screamer toward Parks’ left side, but the keeper dove and tipped the ball to preserve the two-goal lead.

With 10 minutes remaining, Lewis made a run down the right sideline before cutting back to the middle. Defenders converged on the Eagles’ best playmaker as he passed it at the last minute to Henry Balf waiting in the middle of the box. The midfielder skied it, and with the missed shot, BC’s chances of another late-game comeback vanished.

As poor as the Eagles’ passing was on Tuesday, don’t sound the alarm quite yet. The non-conference loss will not affect ACC Tournament hopes and BC will have two more opportunities this season for upset wins against elite teams. No. 3 Clemson will make the trek to Newton Campus Field on Friday, and then Wake Forest will host the Eagles in Winston Salem, N.C., on the following Saturday. By no means will either game be an easy win, but BC could eke out a win with its steady defense, electric forwards, and, of course, Zeiko Lewis, who remains one of the best players on the pitch wherever he plays.

Ed Kelly’s squad is hampered by injuries to Len Zeugner, Mohammed Moro, Younes Boudadi, and Joshua Forbes. On Tuesday, all of those bumps and bruises showed in the shutout loss. Yet, that’s also the magic of a Kelly team: new guys will step up, and Clemson will still take the Eagles very, very seriously on Friday—as it should. But the forwards who have carried them this far with their noses for the goal need to regain that sense of smell, or else the upcoming Top-10 matchups may look a lot like the 5-0 blowout at No. 8 North Carolina.